This space is generally reserved for viewing, analyzing, discussing, and throwing (metaphorical) rotten tomatoes at vintage cookbooks, so it was with some trepidation that I signed up for a "Pieathalon." I had no trouble digging up a vintage pie recipe to let someone else try, mind you, but I was significantly less sure about making one myself.

It's not that I don't cook-- I do! But not generally desserts unless it's Christmas cookies or (on a good year) a birthday cake.

When I do cook, though, I mostly take recipes as the beginning of a suggestion. A vegan mac and "cheese" recipe may catch my eye and I'll wonder what that would taste like. Then I think about what leftovers I have in the fridge, whether my sweetheart will be home for dinner, what kind of food I'm in the mood for... And by the time I actually make the recipe I picked out, no one else would ever guess what recipe I started out with. (Yes, I know how a serves-four recipe for vegan mac and "cheese" becomes a single-serve cheesy vegetarian shepherd's pie, but the steps are not obvious to anyone outside my head.)

Following a vintage recipe was going to be a challenge. Luckily, the kind soul who sent in the recipe I was assigned actually sent something that sounded like it could be tasty: 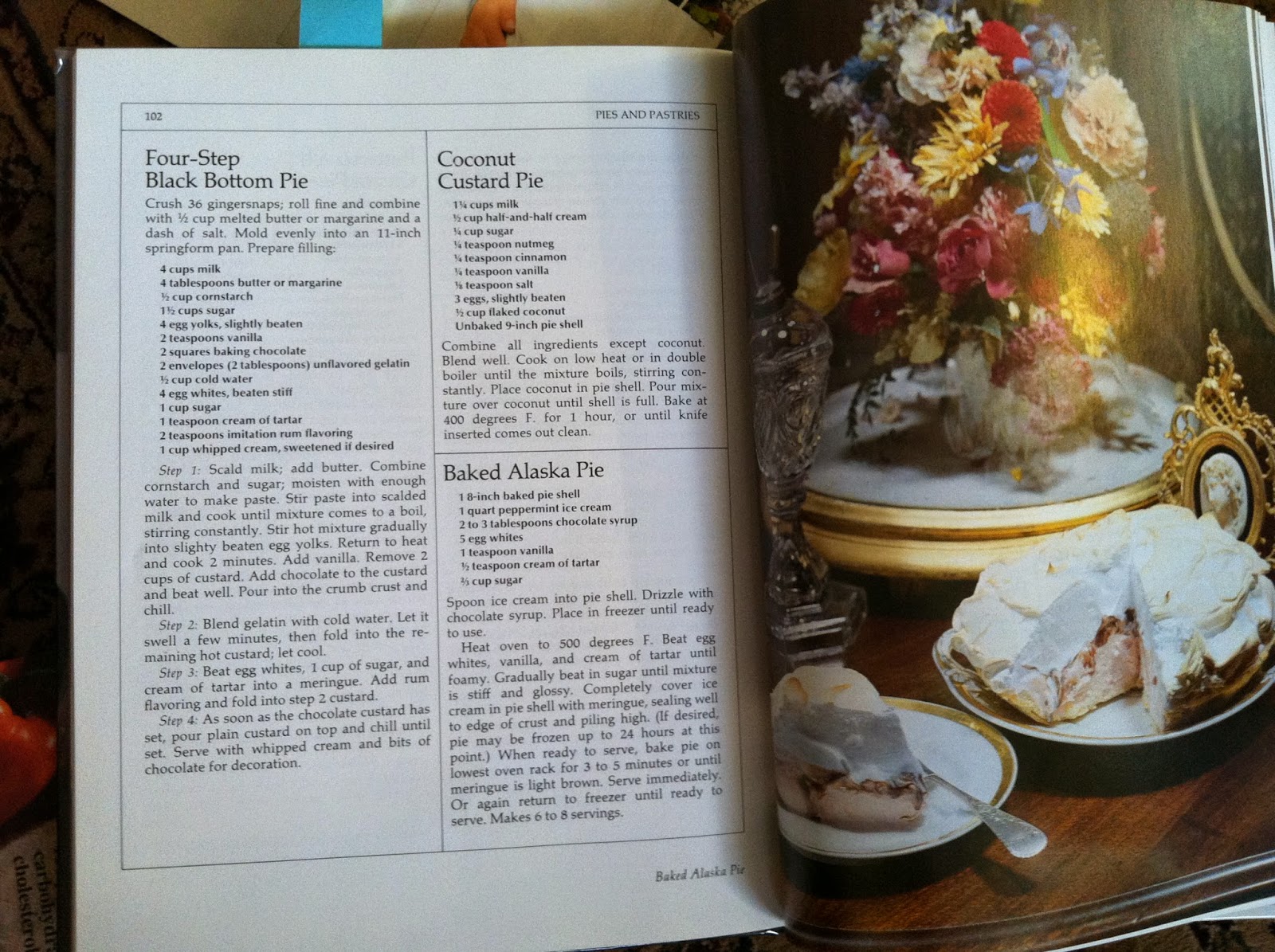 It's a Black Bottom Pie! I remember looking at a similar recipe in my mom's Betty Crocker cookbook when I was a teenager and thinking about making it, but I never took the plunge. I guess this is my chance!

Okay, you probably can't see the instructions, so here they are:

Not only does this sound as if it might taste good, but it also uses a crumb crust! I am SOOOO lucky because I am seriously terrible at making pastry crusts. I try, but they always fall apart and look shaggy if I'm lucky. (If I'm not, they're soggy too.)

The filling sounds like it might be good. I know chocolate custard will be great! The fake rum chiffon sounds a little iffy, but even if it's not my favorite thing ever, I can't imagine it will be terrible either (unless I find a way to seriously screw it up).

Let's get started! First, the crust: 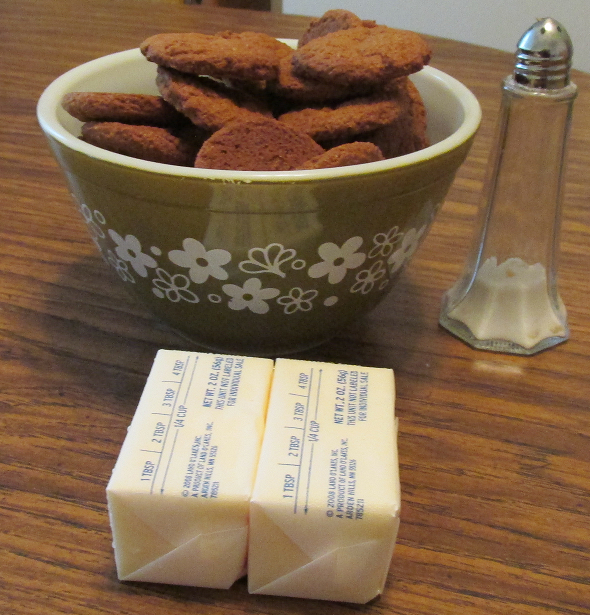 Three dozen gingersnaps, plus butter and a pinch of salt. Yeah, the bowl is too small, but I couldn't resist showing off my vintage avocado green bowl.

Two things about the crust. 1. It's supposed to be patted out in an 11" springform pan, which I totally do not have. This is going in my Pyrex pie plate. 2. I used the 1/2 cup of butter the recipe called for, but you might notice that this looks a bit swampy. It seemed like WAY too much butter when I patted the crust out. I actually ended up going in and soaking up a little bit of standing butter with a paper towel. Maybe my brand of gingersnaps was insufficiently absorbent? 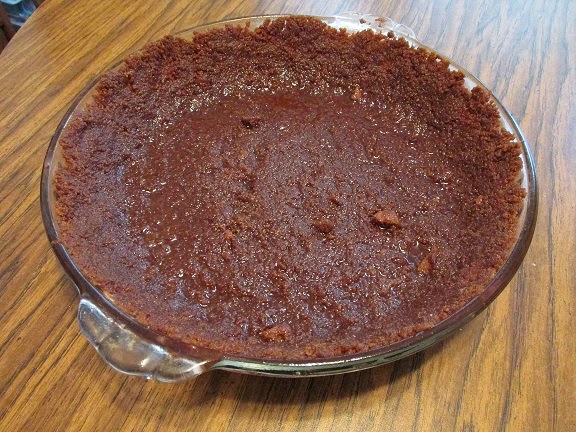 Than it was time to make the filling. 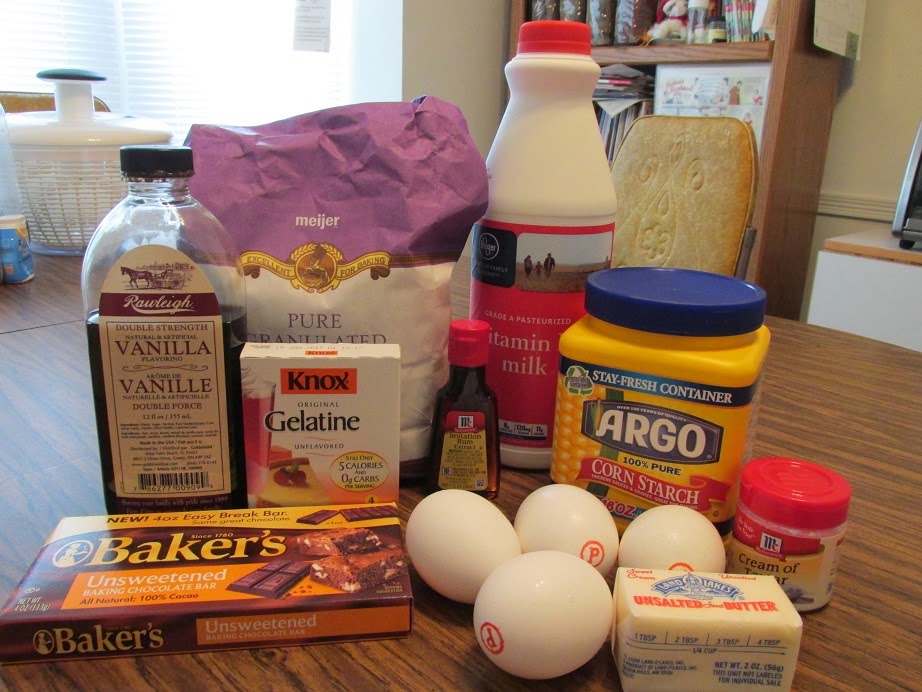 Maybe I should have thought about clearing up the backdrop a little better, but I'm lazy. I'm sure you know the salad spinner did not come into play for this recipe. You'll notice I got pasteurized eggs since the chiffon layer has raw whites in it and I don't want to give anybody salmonella. You can also tell I'm serious about this recipe because I sprung for actual baking chocolate. I usually just substitute cocoa and some extra butter.

The first step for the filling is making the custard, then taking out two cups of it to mix with the chocolate for the black bottom. The rest of the custard is for the creamy top.

I hope I don't offend anyone's delicate sensibilities by showing the bare bottom: 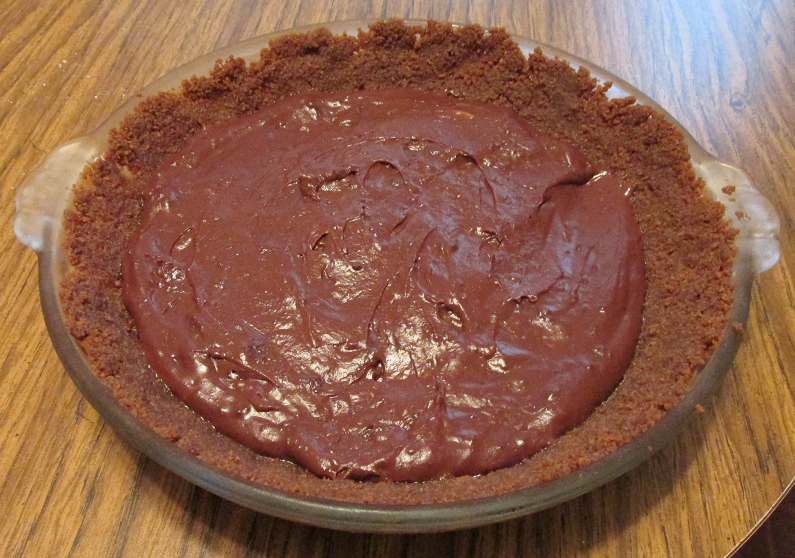 I swear I tempered the egg yolks when I added them to the hot custard, but I still got some lumps! You can see one at about 1 o'clock in this picture. I tried to pick out the bits that I saw, but I'm afraid it's going to be a bit lumpy....

Now to whip the meringue for the top layer: 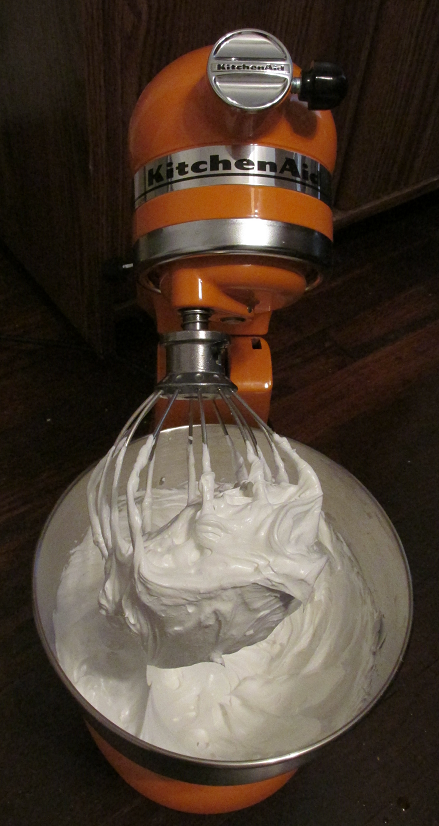 I LOVE my '70s-orange KitchenAid mixer, and I got it on clearance, yet! Hopefully you can't tell that it's on the floor because I have nowhere else where I can use it (and nowhere convenient to store it).

Clearly, buying it was an excellent decision.

But you know what? I LOVE my '70s-orange KitchenAid mixer.

Then I had to mix the meringue into the custard to make chiffon for the pie's top layer. I knew there would be a little too much since my pie plate was too small, but I didn't really expect to have this much left over! 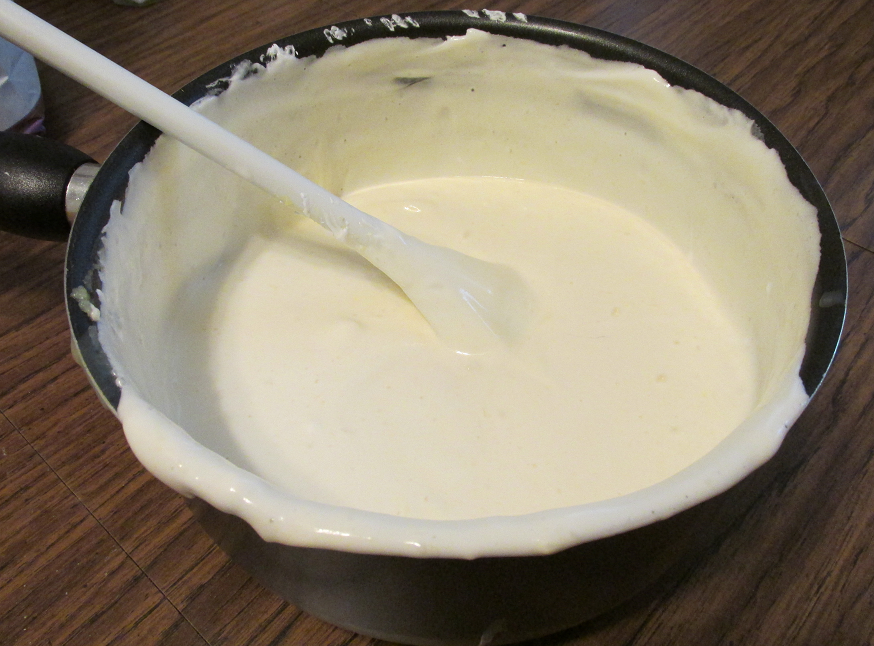 That's about a quart of extra filling! I'm not sure it all would have fit even if I'd had the right size pan. I will keep it in the fridge for a few days, pretending I will think of something to do with it, so I won't feel as guilty when I ultimately throw it away.

After a good chill, it's time to cut the pie. I can't put a person in the picture or I could blow my secret identity, so I'll have my friend Leatherface help with the cutting: 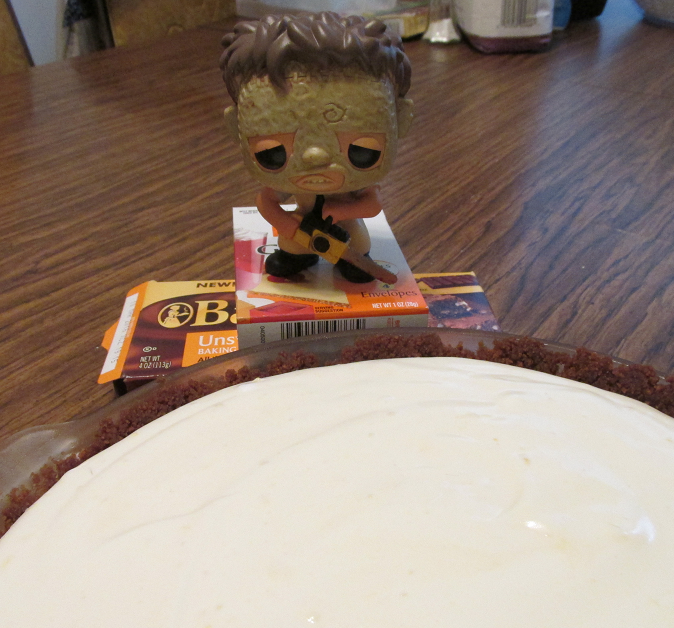 And now the moment of truth... I quickly discover why this was supposed to be made in a springform pan. The gingersnap crust has molecularly bonded with my pie plate! It was a good thing we had a chainsaw to cut through the crust. I bent my pie server and worked up a sweat wrestling slices of this out. The slice below doesn't look bad, considering. (I could have cleaned it up more, but I wanted my struggle to show at least a little.) 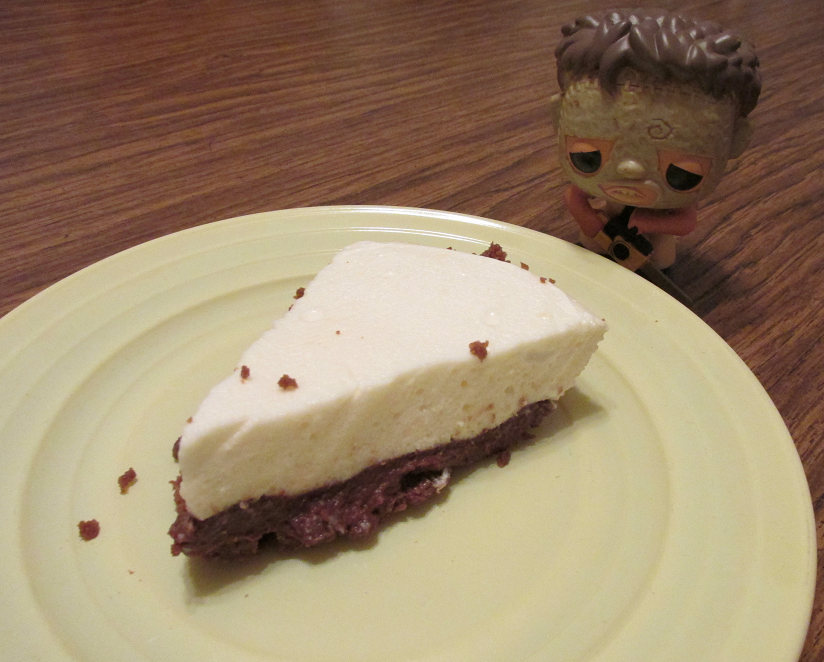 Leatherface looked at it for a few minutes, but he wouldn't try it. I think he was holding out for some headcheese. That's gonna be a looooong wait.

I guess it's up to me, so how does this taste? Pretty good, actually. The chocolate custard is the real star: thick, rich, and bittersweet. It's definitely my favorite part, and the gingersnap crust adds a delicious warmth. (Plus it must have kept me from noticing any lumps in the filling.) The chiffon layer is a welcome contrast: fluffy and mild. While I'm not a big fan of the rum flavoring, the top layer is still a nice addition to balance the intensity of the rest of the pie. (I'll bet it would be killer with almond extract instead of rum!) (Well, maybe not as killer as Leatherface, but you know what I mean.)

Be sure to visit the other Pieathaletes: 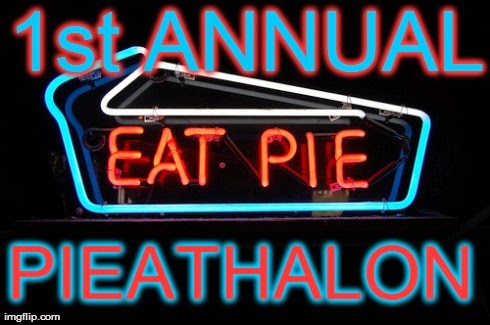 Posted by Poppy Crocker at 8:51 AM