Funny Name: Can you be more specific? Edition

Whenever I see this title from Cook Book (Derby Sisters of Rebekah Lodge #908, 1975) I imagine Margaret Worthington submitting her recipe for "Salad" and the editor asks her if she can give it a catchier title. "Fine," sighs Margaret, as she hands over this new title:

Yes! It's SEVEN THING SALAD! Put things in it! All seven of them! It will be a salad! Made of seven things! (Maybe you're not nearly as amused as I am, but this is killing me.) 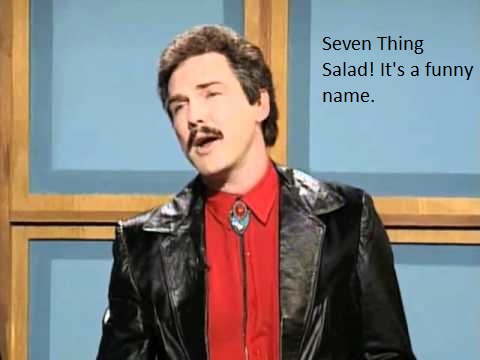 I often make fun of old cookbooks for printing recipes almost devoid of seasonings (such as "chili" that is clearly just misnamed vegetable soup), but spices did exist, even in mid-20th-century America. 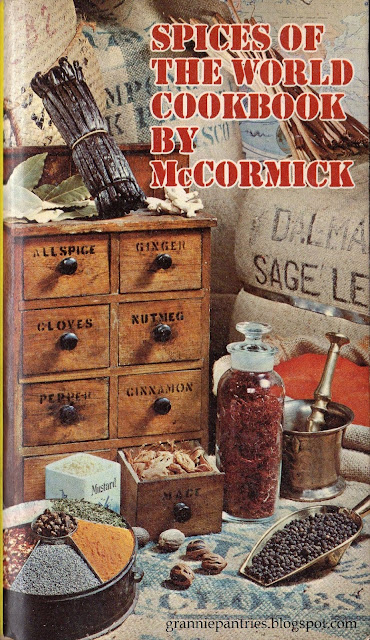 Spices of the World Cookbook by McCormick (Mary Collins, copyright 1964, 1976 reprint) unsurprisingly makes sure there's plenty of seasoning in every recipe. Some of them are quite sophisticated. 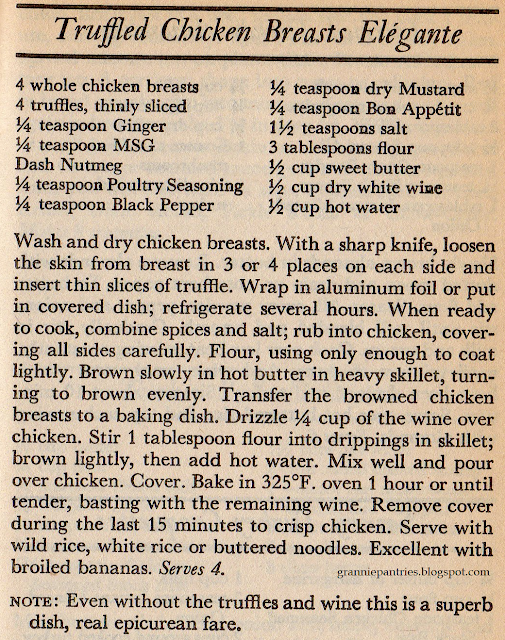 Sometimes it seems like the recipes are trying a little too hard, though. This one splits the difference between "Elégante" and church potluck cookbook for a wholly unnatural concoction: 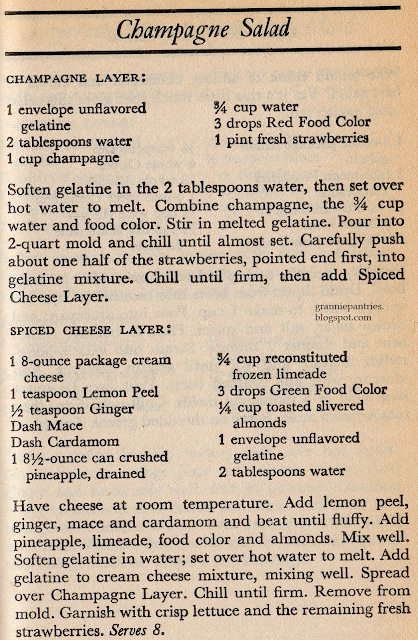 Has anyone ever really thought the best use for champagne is to make it into a gelatin topped with a second gelatin consisting of spiced cream cheese, canned pineapple, and limeade?

My favorite feature of the book might just be its overselling the virtues of dried herbs. Yes, dried herbs can be a great addition to soups, stews, and other juicy, long-cooking dishes. If herbs are an important component of something with a short cook, though, maybe McCormick's dried versions aren't the best bet... 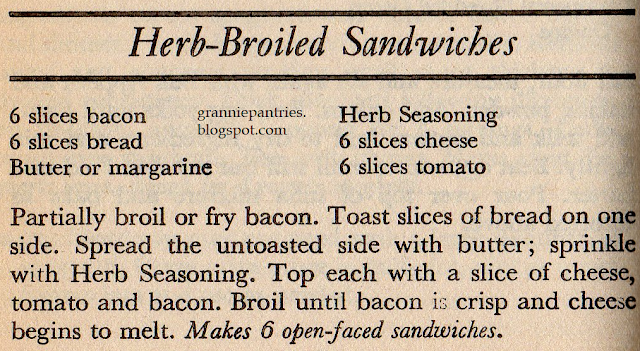 Of course, diners might think of these Herb-Broiled Sandwiches as grilled cheese with bacon and tomato, so they might not really notice the dusty dried-herb flavor.

If you offer a Cheese Omelette aux Herbes, however... 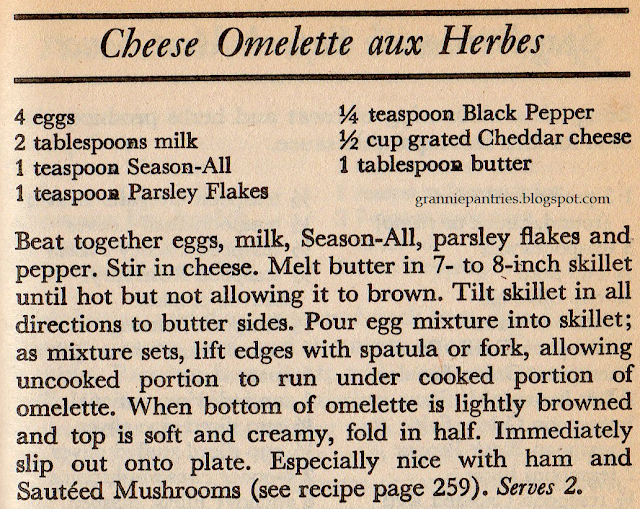 ...well, diners will definitely expect fresh herbs-- not a teaspoon of dried parsley flakes and another of Season-All (seasoned salt). Sorry, McCormick, but an Omellete aux Herbes is not exactly something you can deliver.

I'll finish today's post with a dessert. If you're excited about the prospect of Rum Buns, though, remember the book. 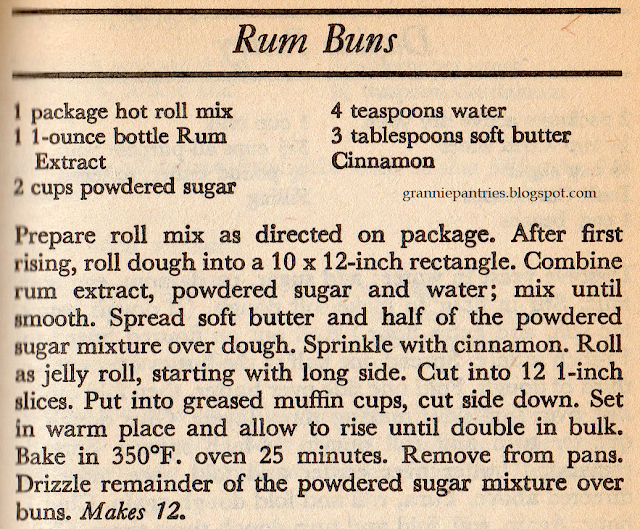 You're not getting any rum in Rum Buns-- just some powdered sugar mixed with a bottle of rum extract and dumped liberally over and on some hot roll mix.

I've got to appreciate this book for encouraging more seasoning in its mostly-salt-and-pepper time, but just like synthetic fabrics didn't make '60s models into astronauts, a teaspoon of dried parsley doesn't make eggs into an omelette aux fines herbes. Both notions would make me laugh 50-some years later, though.
Posted by Poppy Crocker at 12:14 AM 4 comments:

I've heard of having money to burn, but this is ridiculous: 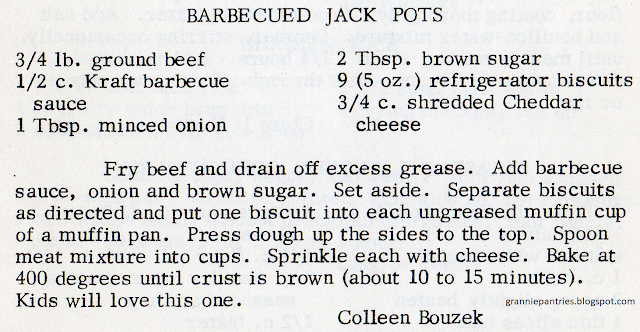 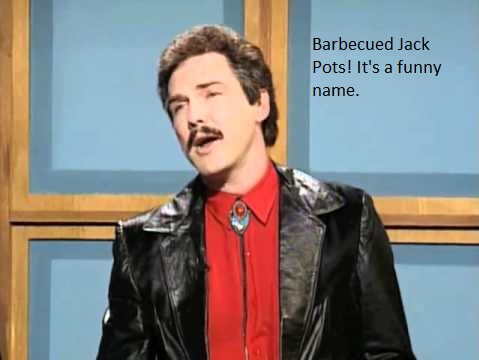 Sorry, but we have to crank up The Human League and bust out the E.T. toys. This week, we're getting a little more current than usual with Top Value Favorites (Top Value & TV Travel Employees for United Way Campaign) from 1982. 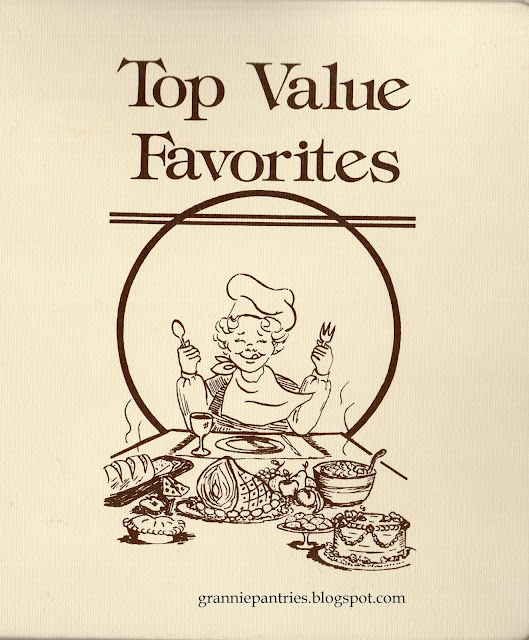 Yes, this is another one of those irresistible community cookbooks with tons and tons of recipes from home cooks. Today I'm going with the totally incompatible menu theme, so let's get started with an appetizer that will bear no relation to what is to come: 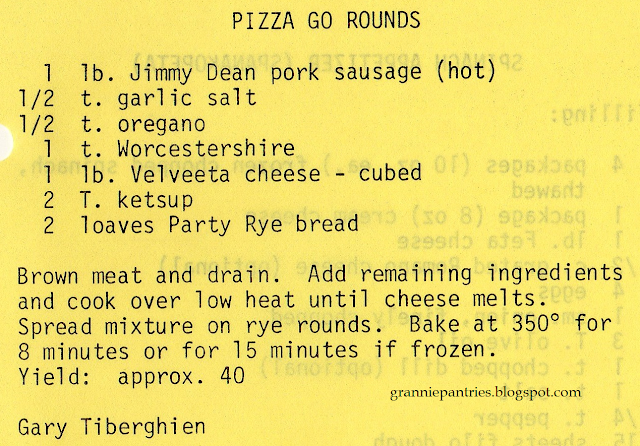 You may also notice that Pizza Go Rounds bear no real relation to pizza, unless your idea of pizza involves slices of rye party bread topped with a blob of a sausage, Velveeta, and "ketsup" mixture.

Maybe we should cleanse our palates before the main course with a salad. 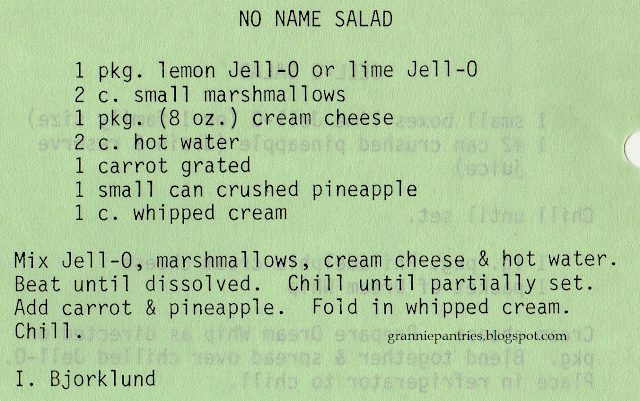 Or should I say "salad," since this concoction of sugar, cream cheese, grated carrot, and pineapple is essentially a carrot cake in gelatin form? (Hey, at least it will probably taste all right!)

No community cookbook tour would be complete without a dip into some international specialty that would be recognized by no one from the region it supposedly represents (if anyone can even figure out what that region might be). That means our next course has to be an Oriental Sandwich. 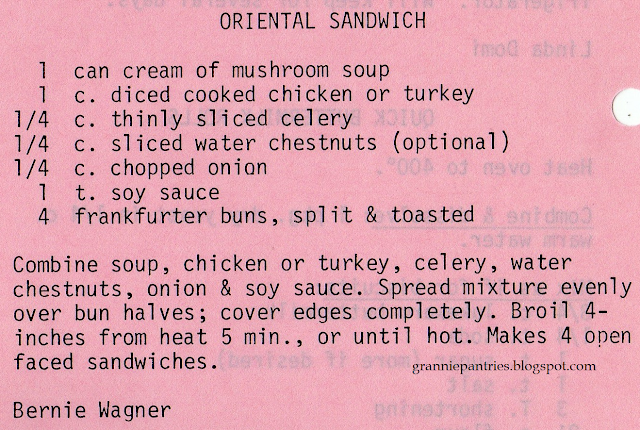 I just want to note that I am NOT responsible for the title of this mixture of cream of mushroom soup, turkey, celery, water chestnuts, and onions slathered on hot dog buns and then broiled. (I guess the soy sauce and optional water chestnuts make this "oriental"?)

In case the courses so far haven't been enough to give you indigestion, it's time for dessert... 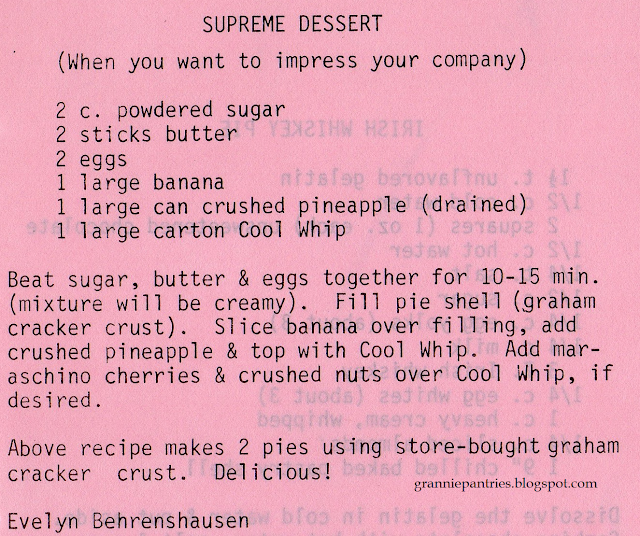 ...which is basically buttercream icing mixed with raw eggs, then dumped into a pie shell and topped with bananas, canned pineapple, and Cool Whip. "Supreme Dessert" indeed.

I think maybe I'd stick to a second helping of "salad."
Posted by Poppy Crocker at 12:32 AM 9 comments: 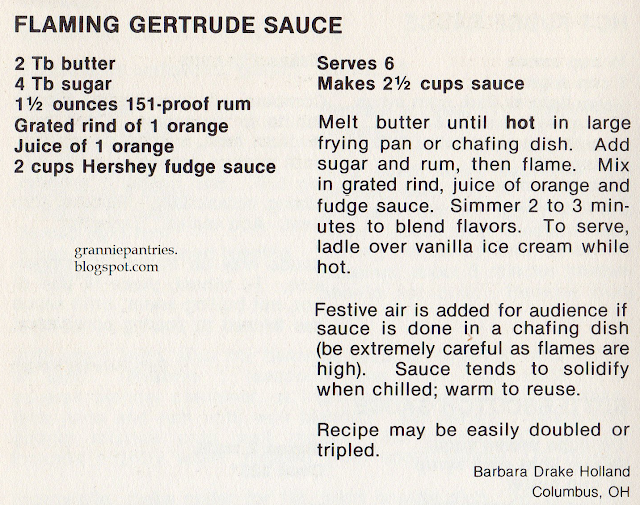 Flaming Gertrude Sauce has nothing to do with especially flammable bridesmaids, though. It's just extra sweet and fatty Hershey fudge sauce with a little orange flavoring and enough rum to light it up! It's not recommended for wedding receptions, but if the bride chooses to flaunt convention, she should keep all pouffy sleeves out of the immediate vicinity...

Since our theme is a risk of third-degree burns, here's a bonus funny name recipe from the same page:

Lick the skillet if you must, but I'd recommend letting it cool down first! No point in getting flaming lips.
Posted by Poppy Crocker at 12:07 AM 6 comments: 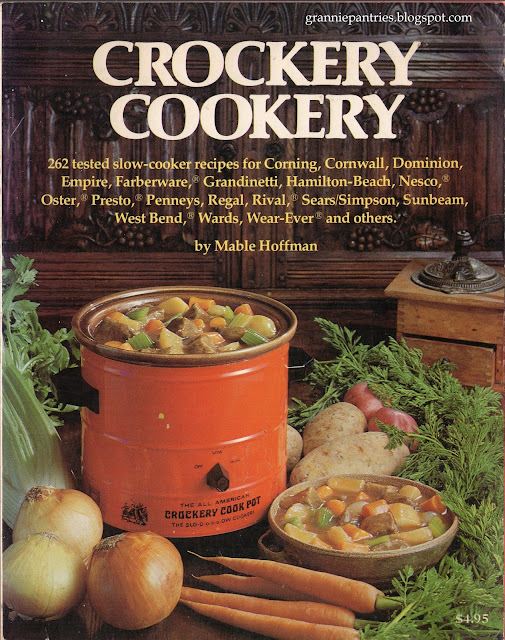 In case there was any doubt that I am a vintage kitchen nerd, my favorite part of Crockery Cookery (Mable Hoffman, 1975) may have been the pages and pages of pictures, reviews, and temperature charts for old crockery cookers at the beginning of the book. (Now I want a Dominion Crock-A-Dial just because I love the name.)

The recipes tended to be pretty standard, though, like the stew on the cover. There's nothing too surprising about beef with carrots, onions, potatoes, and celery.

As is the case with nearly any appliance-based cookbook, this did have its fair share of recipes that could have been better and/or made just as easily (maybe more easily) without slow-cooking.

You might be thinking that stuffed squash makes sense in a slow cooker, but the recipe isn't for a hard winter squash. Sure, you could cook pattypan in salted water for 6-7 hours, but since we're talking about a summer squash, you could also just boil it for about 10 minutes (and probably have it taste a whole lot fresher). Then maybe stuff it with something that's not frozen creamed peas.

Hoffman was clearly one of those cooks who LOVED canned fruit with meat. Turn to the "Beef," "Other Meats," and "Poultry" chapters, and you'll find several variations of the featured protein coated in canned fruit cocktail or peaches. I was especially impressed with the Golden Glow Pork Chops for taking the canned fruit play to a new level.

Hot, soggy tuna-egg salad rolls! Everyone will be thrilled... when the dry heaves subside.
Posted by Poppy Crocker at 12:06 AM 8 comments:

Looking at the title of this recipe from from New The Grange Desserts Cookbook (Favorite Recipes of the Grange Members, 1973), I was half-afraid it would be for a buttermilk, onion, and garlic-flavored dessert. 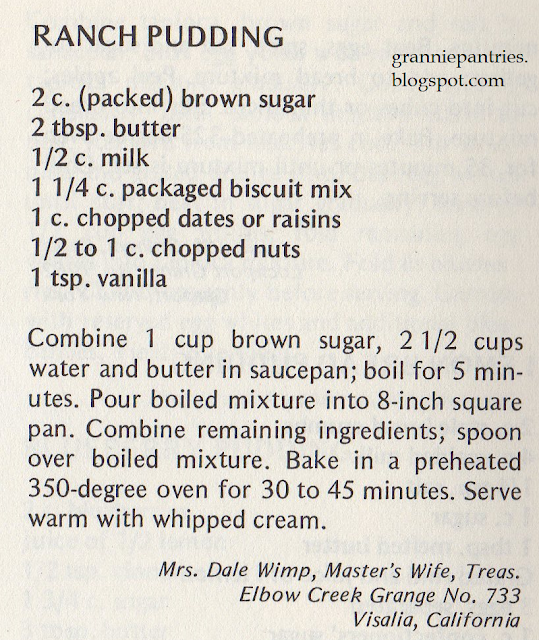 Nope! This is one of those baked puddings, based on brown sugar and biscuit mix and flavored with dates or raisins and nuts. Not sure where the ranch came in, but I imagine it is part of the mid-twentieth-century obsession with the west and dude ranches. Cowboys must love their raisins! 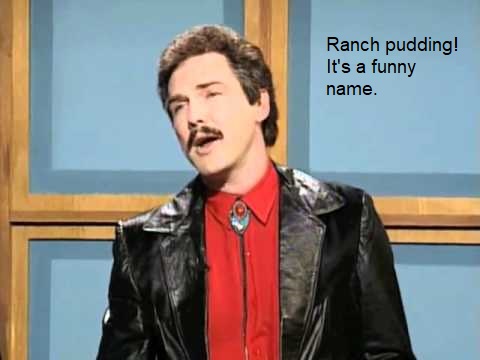 The secret skull and other imaginary spooky "Gourmet" themes 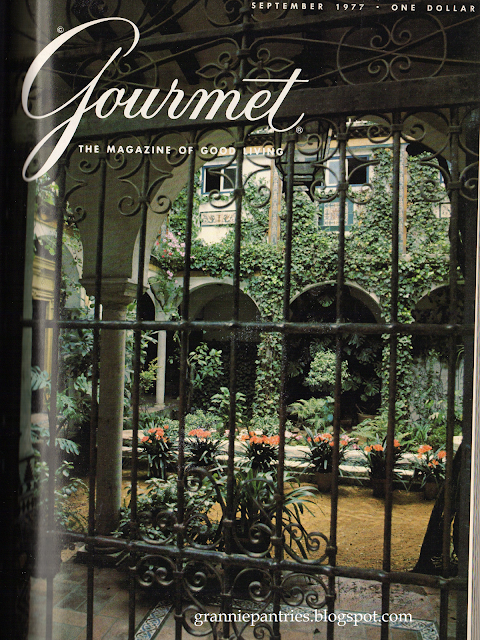 My favorite thing about the cover of the September 1977 issue of Gourmet is that the composition of the photo from Seville kind of reminds me of a skull. This allows me to imagine the magazine is already hinting at Halloween, something I adore, rather than simply trying to sell plane tickets and high-end liquor.

I didn't expect to see my imagined Halloween theme continued in the magazine. (I'll be shocked if even the October issue explicitly mentions the humble holiday.) However, the Gourmet Menus theme for the month, late-summer luncheons, let me continue to pretend the issue is secretly Halloweeny: 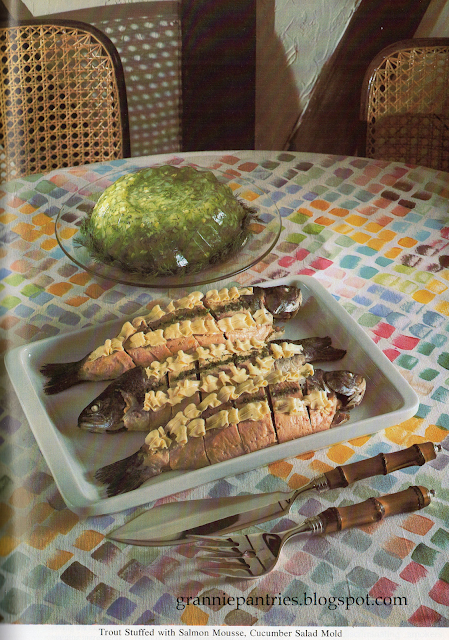 Whole fish oozing pink and yellowish goop, staring out with their dead eyes? A gelatinous blob ready to engulf anything in its path? It's an embarrassment of riches. Heck, the serving utensils are practically a machete and a pitchfork!

The playful tablecloth may be trying to hide it, but I'm calling this a Halloween preview! 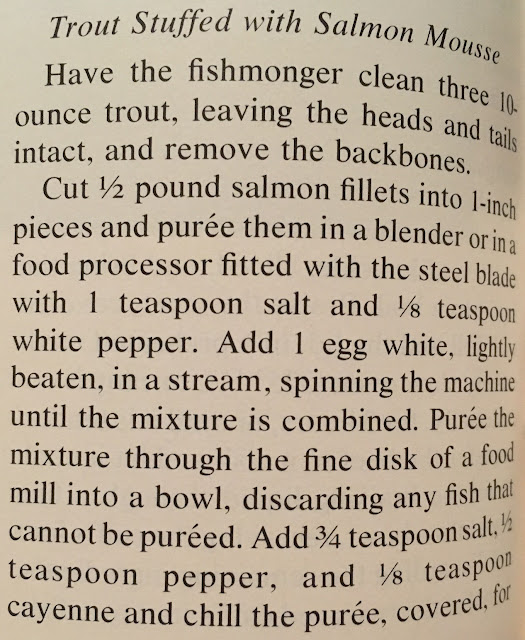 The blob is a cucumber gelatin. It's high-class because it uses unflavored gelatin and food coloring rather than lime Jell-O. 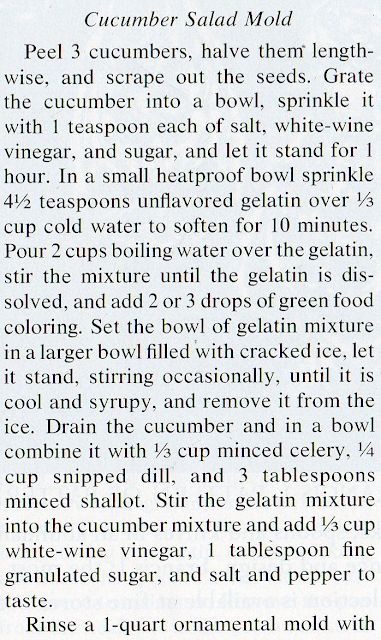 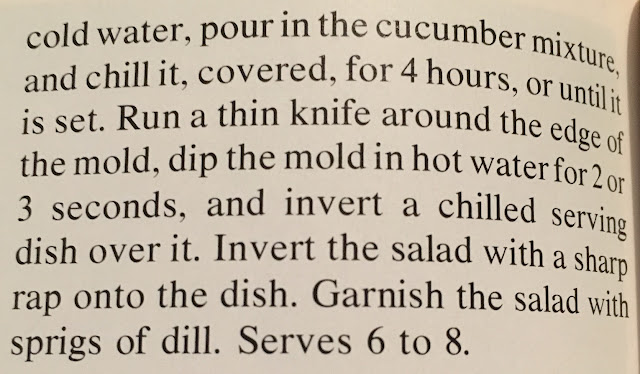 This issue of Gourmet makes me happy the only way Gourmet ever makes me happy-- unintentionally. If you're not a Halloween freak and you don't like my pushing it into early-September recipes, though, I'll leave you with a picture from their more summery-looking menu, which stars Boeuf à la Mode en Gelée on the same bright tablecloth. 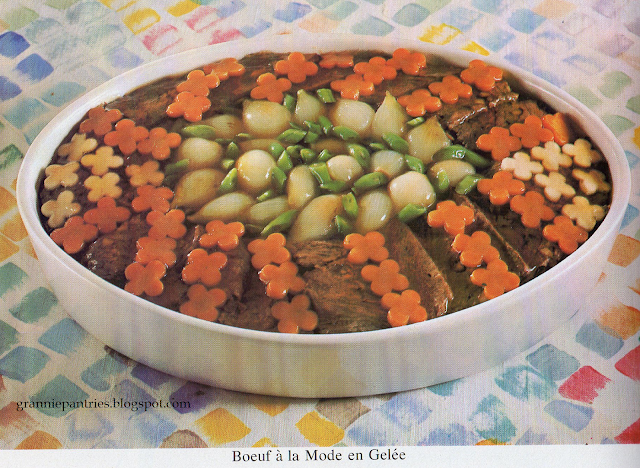 Yep, it's a whole aspic garden filled with tiny carrot and turnip flowers growing in rows of sliced beef "soil," with onions and green beans growing in the central plot. Apparently even Gourmet can occasionally be playful. (The recipe goes on for MILES, though, and I am too lazy to even try to copy it for you. Suffice it to say that you need a lot of patience and the better part of a day to make this disk of jellied meat and veg.)

Happy September! Go cut some carrots into flowers or carve an early jack-o-lantern.
Posted by Poppy Crocker at 12:01 AM 4 comments:

"Eat up your galumpies, kids! They're severed galumpher fingers cooked in a lovely blood sauce. You've got to take them out before they take you out!" (Nobody tell them it's just stuffed cabbage rolls, or they'll lose interest.) 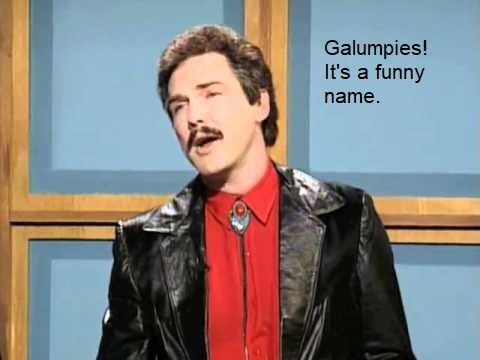