I've made it through two weeks in the new semester! Two weeks of classes interrupted by students who don't understand why I won't sign an add form for someone who thinks it is fine to wander into a class that is in progress and bring it to a screeching halt. Two weeks of trying to continue to write comments that strike the right balance between being encouraging and constructively critical even after several hours of grading. I think it's time for a party.

Let's have a Bisquick party! "Betty Crocker's Bisquick Party Book" is from 1957 and I am intrigued by the cover. Is that a pan of enchiladas? Made with Bisquick? The cover photos aren't labeled, but I'm pretty sure my guess is right:

Chicken enchiladas made with Bisquick tortillas! I am crazy for enchiladas, and these initially don't sound too bad. The filling is appropriate: chicken, olives, onion, and cheese. The sauce might be a bit bland (seems like a lot of water and not much chili powder for 16 ounces of tomato sauce), but these are still more exciting than I expect for such an "exotic" recipe in the '50s.

I can't get over the mental image of Bisquick tortillas, though. In my mind, they're kind of biscuit-y and soak up a lot of the bland sauce, turning to a sodden, mushy mess. The picture doesn't  look so bad, though, and the ingredients for homemade flour tortillas are not much different from the ones in Bisquick. It's probably just my mental association of Bisquick with biscuits that makes Bisquick tortillas sound like a bad idea. I'm intrigued (but not enough to try making this!).

Whoever put this booklet together really liked the idea of Bisquick rounds stuffed, covered with sauce, and baked. Just a couple pages later is another party idea that probably sounded lovely in the '50s:

Tuna Royals are for "When you hadn't planned a party, but you have one." I love the description. It's meant to emphasize that this is easy to make with ingredients that most home cooks would already have on hand, but it's also a backhanded acknowledgment that they would probably make something better if they'd had time to plan.

So what might do the job of filling up unplanned guests? "Thinner Pancakes" (2 c. Bisquick mixed with an egg and 2 c. of milk) rolled around tuna, veggies, and cheese, then topped with a canned cream of celery soup sauce.

Now I'm busy imagining trying to scoop salty, soggy, tinny pancakes out of a baking dish, pretending that the topping doesn't look phlegmy and that they're actually quite festive.

I guess it's not so bad that the party's over. Grading almost sounds appealing in comparison. 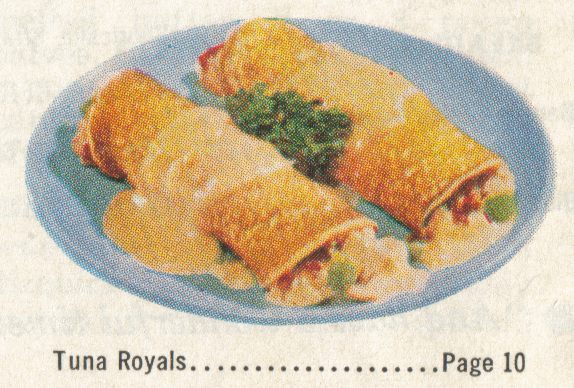