Surprise quickie post! I love doing the Pieathalon in the summer because I don't have many classes so there is time to invest in cooking. When I saw that Jenny at Silver Screen Suppers was doing a Vincent Price Cookalong, though, I wanted to get in on it because I LOVE Vincent Price. One of my great thrills was to see a Vincent Price Super-8 Film Festival at a horror convention.

The problem is that in the fall I am constantly grading papers, so I don't get to give Mr. Price the time that his recipe deserves. So here is a quickie post because it's this or nothing...

From the selection of recipes, I chose The Muffins – Blueberry Muffins a la Postada.

Preheat oven to hot (400 degrees F /200 degrees C).
Cream together the sugar and butter.  Add eggs and mix thoroughly.
Sift and measure 2 cups flour.  Sift again with the baking powder and salt.  Add the flour mixture alternately, little by little, with the milk to the creamed ingredients.
Carefully fold in the blueberries.
Grease muffin pans with butter, fill half full and bake in the oven for 20 minutes. 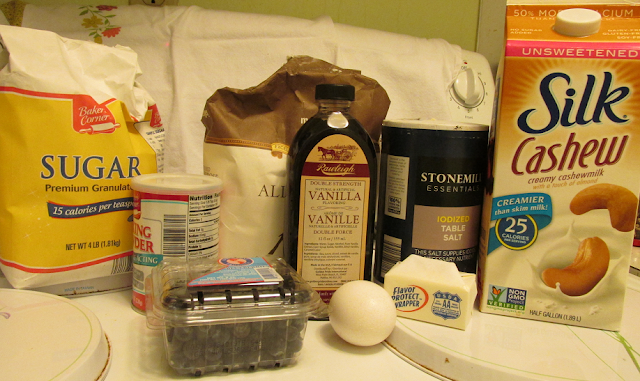 For some reason, I was convinced there was vanilla in this recipe when I took the picture. As I put the muffins together, I realized that there was not. You can ignore the big bottle of vanilla front and center because all it did was pose for the picture. (I only made a half-batch, too, so that's why there's only a single egg.)

The muffins were not really brown at 20 minutes, so I left them in a few minutes extra. Here's the final result (with a bat, in honor of The Bat): 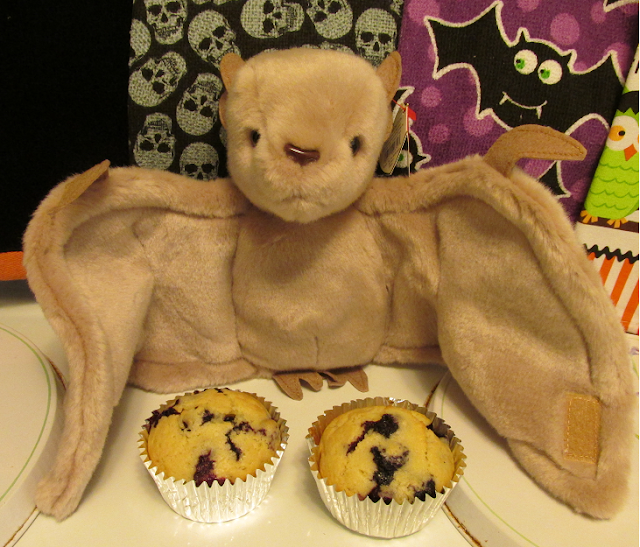 The muffins were pretty with the blueberries bleeding through the tops. They honestly taste pretty boring, though. They're not very sweet, and I kind of wish I had added some vanilla to give them a bit more depth and complexity. The butter added a nice dairy note that muffins made with oil lack, so that was nice.

If my little friend is a vampire bat, I'm sure the muffins are perfectly safe. If he prefers to eat fruit, those muffins better watch out!

Thanks to Jenny at Silver Screen Suppers for hosting! If you want to get in on the action, she is accepting posts until midnight November 7 (Great Britain time).