You know you're in for a treat with a gelatin-based cookbook. 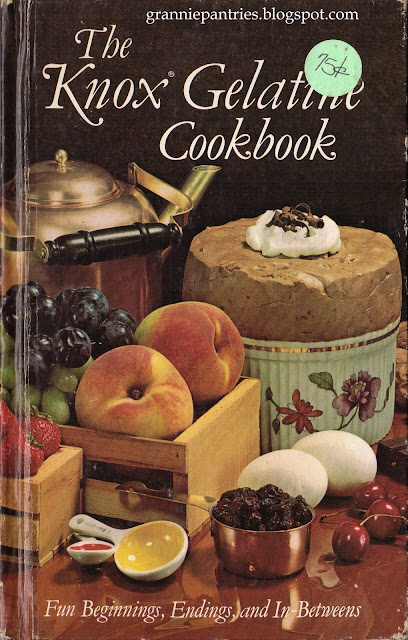 The Knox Gelatine Cookbook (1977) does not disappoint. It's loaded with all the congealed-kitchen-sink salads, unspreadably-thick condiment molds, and even (gasp!) palatable-sounding fresh fruit pies anyone could hope for.

I got totally sucked into the chapter announcing that Knox had discovered "The great American snack-time revolution." What was it? Knox Blox, the brand's version of Jell-O Jigglers.

Jell-O's plain, fruity fingers had nothing on Knox as far as gelatin-based finger-food was concerned, though. Knox was all-in! How all-in?

Well, they weren't aiming just for the kids. 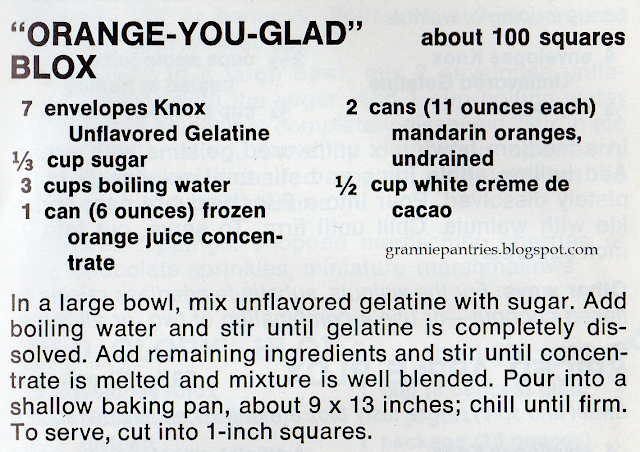 Even though the bad knock-knock joke title makes these sound kid-friendly, "Orange-You-Glad" Blox make sure you're glad with the addition of white crème de cacao.

The Knox recipe creators also saw Knox Blox as replacements for all kinds of desserts-- not just a little fruit-flavored snack for the toddlers. 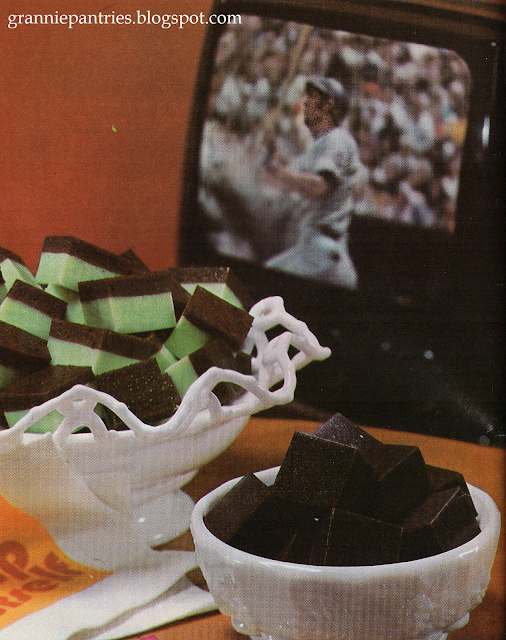 No, the whole family could kick back, watch a baseball game, and enjoy the wonder that is chocolate watered down, then thickened back up with gelatin. (Why eat straight-up chocolate anyway, or mix those chips with cookie dough, when they could be eaten in blox form?) 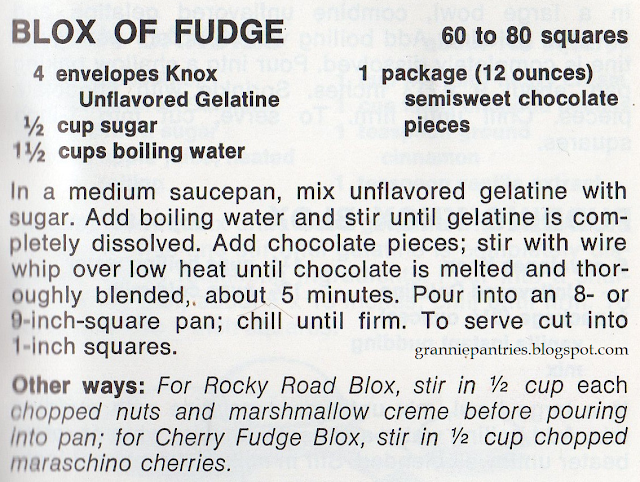 The grown-ups could chase the kiddies away from the intriguingly two-layered Grasshopper Grabs: 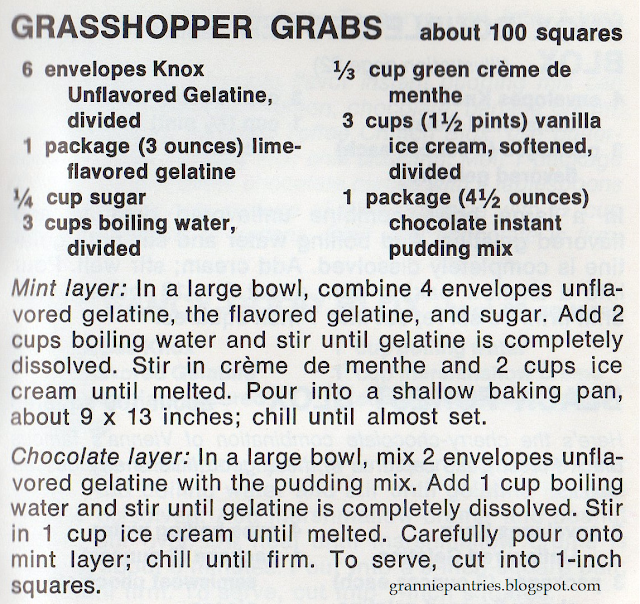 Yeah, kid, I know it has ice cream and chocolate pudding mix in it, but the crème de menthe means it's for mommies and daddies!

If the kids really insist on having their ice cream ruined with gelatin, there's a banana split version of Knox Blox: 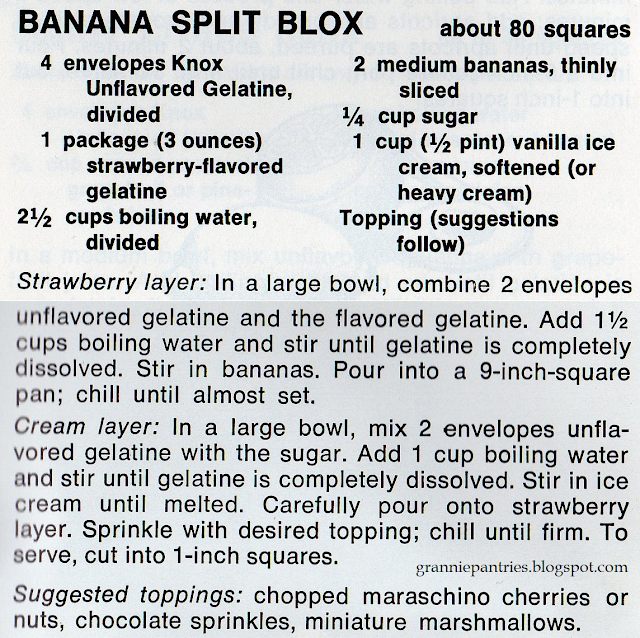 If you think you can get out of having to eat Knox Blox by claiming a preference for savory snacks, well, not so fast! The Knox Gelatine Cookbook has more than considered that possibility. 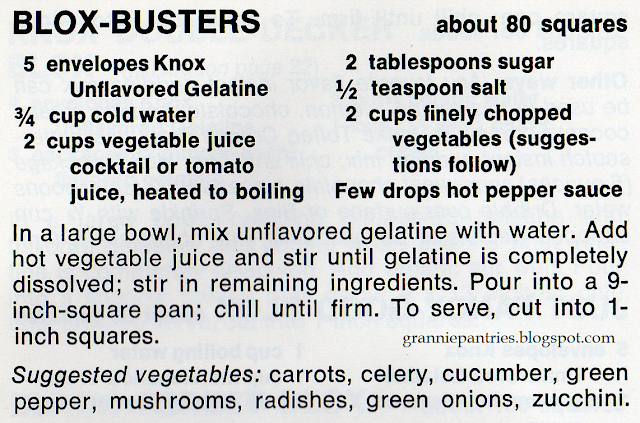 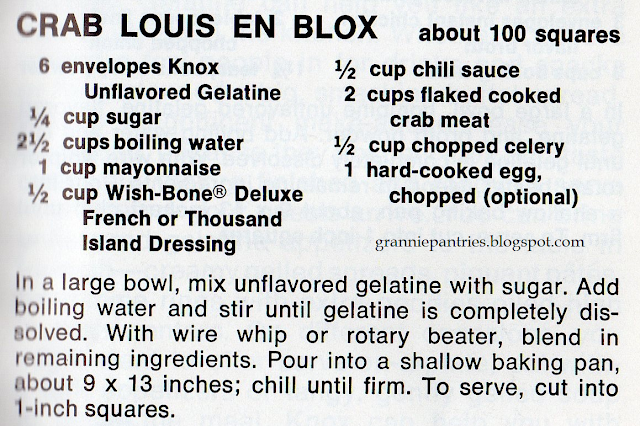 And those who have never been to a Jewish deli may trick themselves into thinking Salmon "Lox Blox" is a suitable substitute: 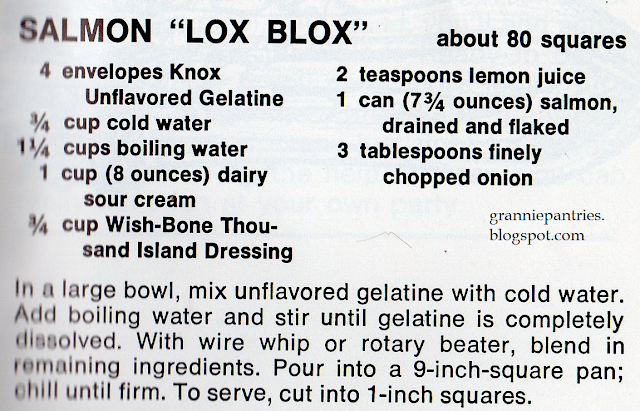 Anyway, I hope you can see how the blox sidetracked me so much that I haven't even mentioned "Pantry-Shelf Supper" or the ice-cube-tray-molded salad toppers. They might show up someday, but I had to present the blox in all their glory!
Posted by Poppy Crocker at 8:30 AM