I'm not quite sure what to say about the recipes in this book. 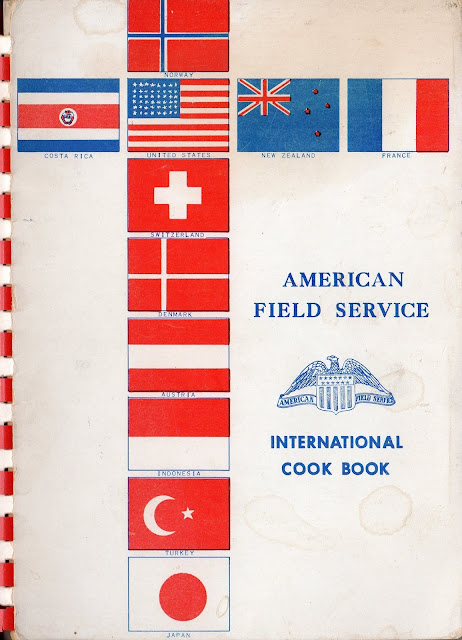 This American Field Service International Cook Book (Western New York Committee for American Field Service, 1958) is full of actual international recipes, as they were all sent to the recipe compilers from parents whose children were sent to America as exchange students, or parents who accepted American exchange students into their own homes. I don't really want to make fun of other countries' cuisines, but I do find a certain amount of charm in the way the recipes are written. It seems as if a lot of the parents involved made a good effort to write the recipes in English, even if it wasn't their first language, and the committee emphasized that "When the recipes were written in English, they were used without change." That makes for some interesting ingredients and instructions. (My title for this post is a bit of a nod to this style of writing. It's the title of the cookbook as I imagine it might be if it were oddly translated.)

Aside from my usual amusement with "recipes" that just list a bunch of things that may be served together, without any real instructions about proportions, preparation, etc., I am also interested in the ingredients. Is "palmetto" another name for hearts of palm? And what are "cabbage-trees"? Is this another name for cauliflower or Brussels sprouts? I could see people using that term for either of those... Is there a vegetable called "cabbage-trees" that I'm just not familiar with and can't find on a simple Google search?

Whatever vegetables you choose from that list, though, "To serve with this salad can be used shrimp, chicken pieces, ham, salmon, sardines or left-over meats." You've got to love the awkwardness.

When I got to Caramel Pudding, I had no trouble figuring out the mystery ingredient. I just liked its charming new name.

The egg yolk has already been added to the milk mixture, so I can guess that "egg-snow" is the writer's attempt at being creative with the term "egg white." (And in case you're wondering, the milk measurement does actually make sense. At first I thought it was 3/8 1 and I was thinking "Three-eighths of one what of milk?" The "one" is really a lowercase "L," so it's 3/8 of a liter, which the book's table of conversions lists as the equivalent of 1-2/3 cups.)

Sometimes I am a bit mystified by the recipe, but my perplexity here is doubled: 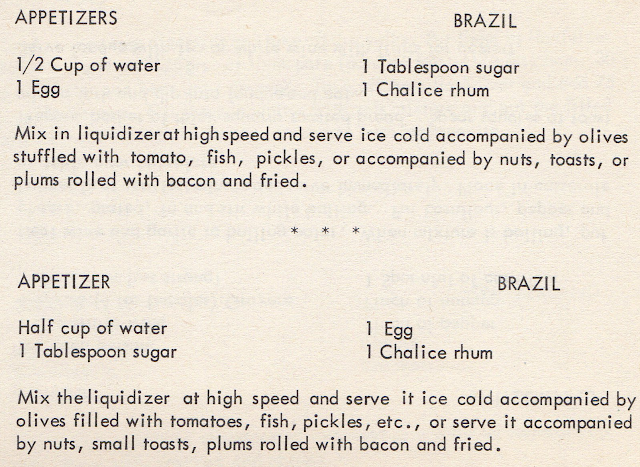 Why list the creatively-named "Appetizer/s" twice? They are identical, except for the sugar and egg order being reversed and the half cup being written once in words and once as a fraction. I can guess "the liquidizer" refers to a blender, but I still have no conception of what diners are supposed to do with the mixture of water, sugar, egg, and rum. Are they supposed to float some tomato, fish, and pickles in it to make a weird soup? What is it supposed to accomplish with toasts or bacon-fried plums? I have no idea, except that it has to be ice cold to accomplish whatever the goal is...

And finally, I will admit that I'm not really into herring, but that's not what drew me to this recipe. It's what appears to be the first ingredient. 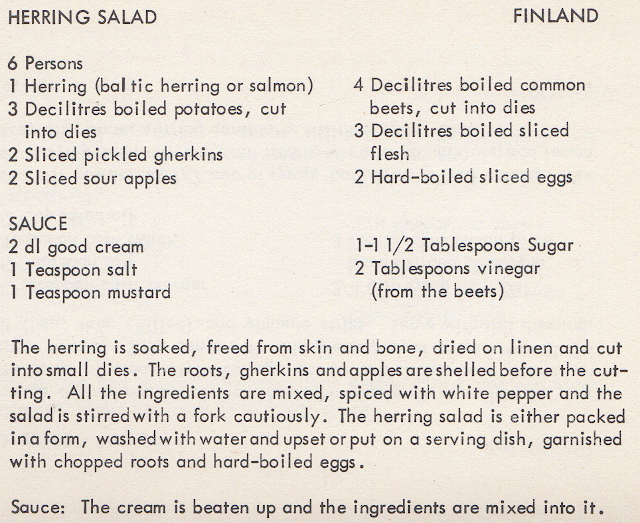 Did you read the first ingredient as "6 persons" too? I'm sure it's just supposed to be the number of servings, but the placement and wording make it look... well... like a cannibal feast! And the ingredient of "3 Decilitres boiled sliced flesh" doesn't help either, considering there is no specification of the type of flesh involved. (At least it's not "cut into dies" like so much else.)

This is a pretty scary recipe just from the wording, even if we don't take into consideration that it's for herring, pickles, sour apples, beets, and eggs. Just make sure enough "cream is beaten up" to make the sauce, and this recipe is pretty all-around brutal.

For fans of awkward translations, this is a must-read.
Posted by Poppy Crocker at 7:31 AM