I was so excited to sign up for the Pieathalon again this year! I couldn't wait to see what wonder recipe I would get. Then I was terrified when this appeared in my mailbox: 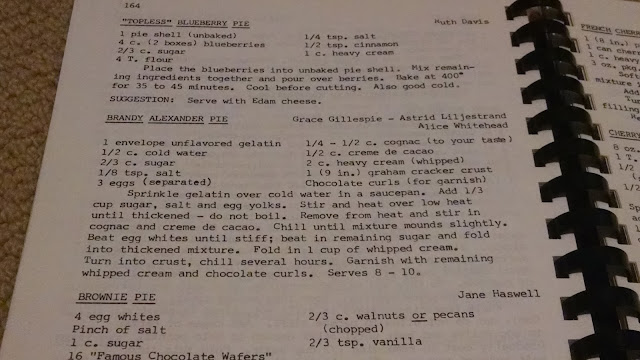 There is no objective reason to be terrified of Brandy Alexander Pie. It's mostly whipped cream, sugar, and booze-- sure to be tasty. It's from a blogger I read and adore-- Erica Retrochef at Retro Recipe Attempts. Plus, it's from one of the types of regional cookbooks I love to peruse: The Sampler: A Collection of Recipes by the Woman's Club of White Plains (1976). 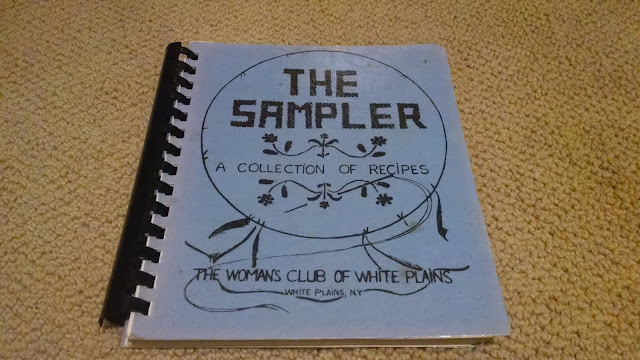 I was terrified because I'd have to go to a liquor store. I'm super shy. I like mixed drinks at a friend's house, but at home I stick to cheap wine because I can pick it out at the grocery store based on the picture on the label. (I go for something with a cute animal or a sexy person, depending on my mood.) Now I would have to go to a liquor store and actually ask another human being for what I wanted. That's no obstacle for most people, but I am ... uh ... special.

So I went in and got the cognac with no trouble. The creme de cacao was a different story, though. I mumbled and initially ended up with a bottle of Curacao! That would have made for a shockingly blue pie! Then when I finally got the clerk to understand I meant creme de cacao, he asked which kind. I didn't know there was more than one! "One's clear, and one looks like chocolate," he said. I figured chocolate is always the right answer, so that's what I left with. I hope I was right.

Here are the painstakingly assembled ingredients: 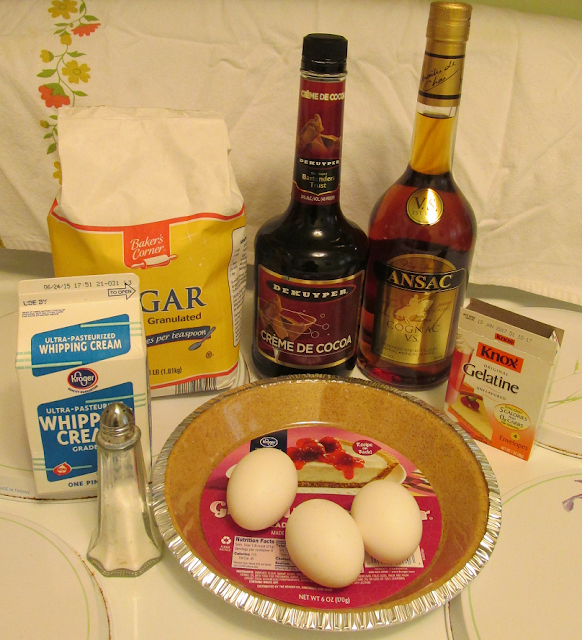 Once I had the ingredients together, I got to work. First, I had to mix an envelope of gelatin, 1/2 c. cold water, 1/3 c. sugar, three egg yolks, and 1/8 of a teaspoon salt in a saucepan and thicken over low heat: 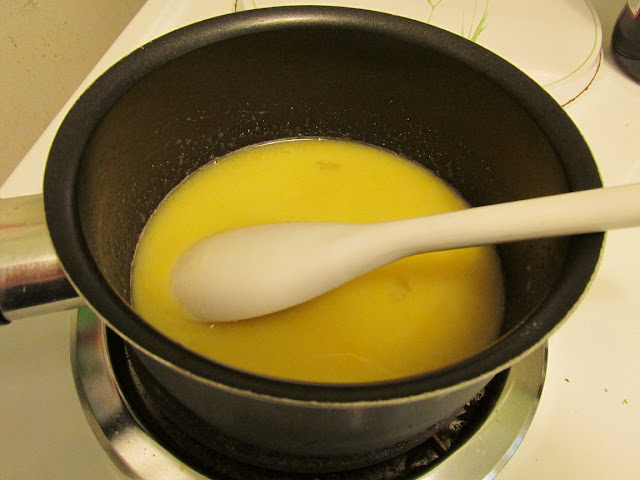 The egg yolks made this look lemony, so I kept absentmindedly sniffing it, expecting a burst of lemon. It mostly smelled like ... eggs. With gelatin. Not really what my nose was hoping for!

Then I had to stir in 1/2 c. creme de cacao and 1/4-1/2 c. cognac. I wasn't sure what "to my taste" would be once all the other ingredients were added, so I went with 1/3 of a cup of cognac. Then I whipped a cup of cream while the mixture chilled. Once the gelatin barely started mounding when dropped from a spoon, I whipped the egg whites with 1/3 c. sugar in my awesome '70s-orange mixer. 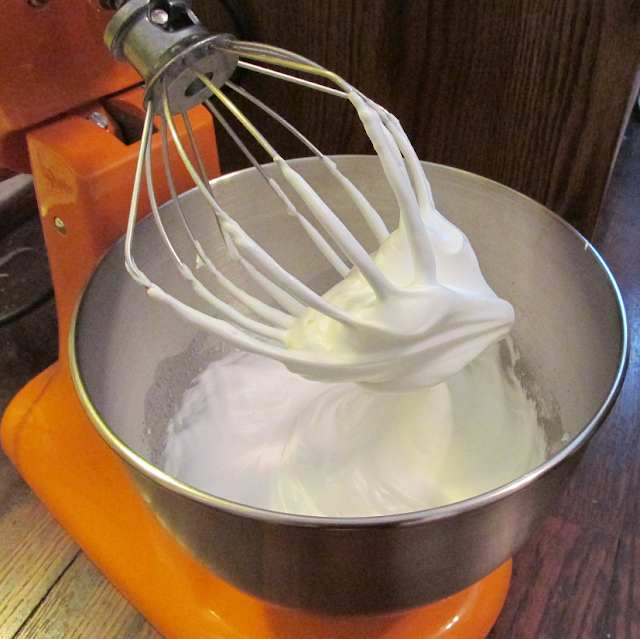 The gelatin mixture set up FAST, though. In just the few minutes it took for me to whip the egg whites, it went from barely beginning to set to pretty well set at the edges and only loose in the center! I folded in the egg whites and 1 c. of the whipped cream as well as I could, but there were little lumps of jiggly booze throughout the filling as I poured it into the graham cracker crust.

Once it had chilled for several hours, I called in a friend to help with the cutting. 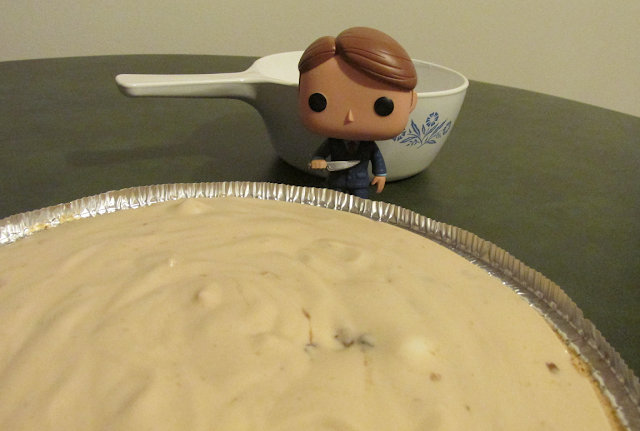 "My, Poppy, this is an... interesting... concoction. What are those brownish lumps?"

"They're little lumps of jiggly booze, of course."

"And you would think of serving this to guests? Perhaps you are more sadistic than my initial assessment seemed to suggest."

When he got to work, I realized my chocolate was too melty to make the suggested garnish of chocolate curls. I pulled out the leftover whipped cream and some cocoa powder instead.

Once he sliced the pie and I had garnished it to the best of my ability, I offered him the first slice. 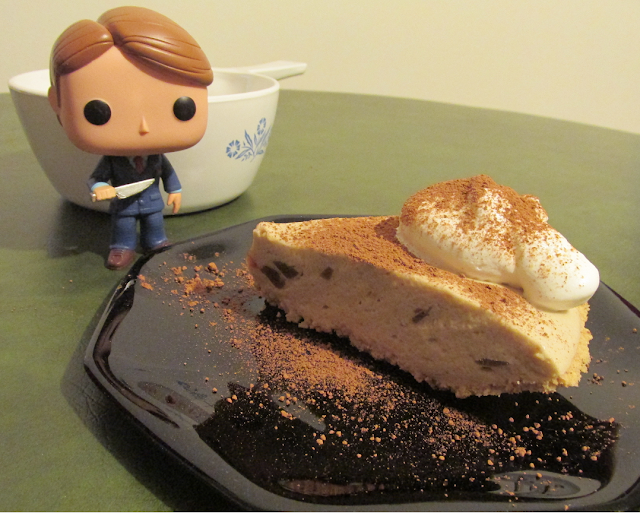 He stared at it for a moment, as one mesmerized by a car wreck.

"Won't you try at least a bite?" I implored.

"I've brought a friend who might enjoy it more than I would. This is sure to be better than what they serve at the Baltimore State Hospital for the Criminally Insane." 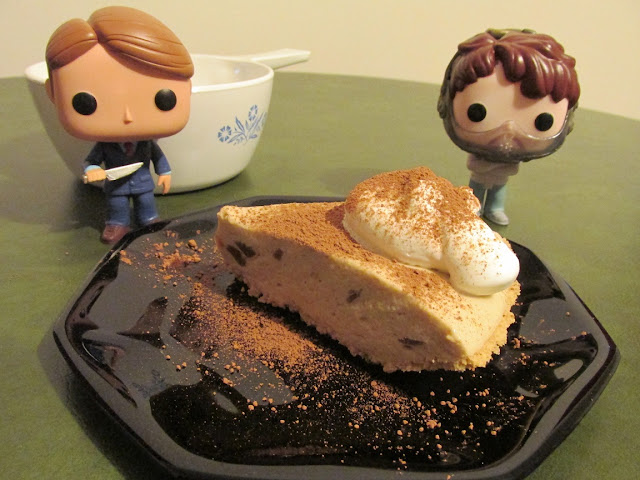 "But I forgot about the mask. Poor Will.... It looks as if he won't be able to partake after all."

Since it looked like my guests wouldn't help out, I tasted this myself. I've never had pie that burned before. I definitely knew it when I hit a gelatin lump! Still, this is pretty tasty. It is sugar, whipped cream, and booze, after all. The cocoa powder sprinkle adds a nicely bitter counterpoint. If you want relaxation and a dessert all in one, this is worth a try if you can brave the liquor store.

A big thank you to the always-entertaining Yinzerella of Dinner Is Served 1972 for organizing the Pieathalon! Be sure to visit the other Pieathletes: 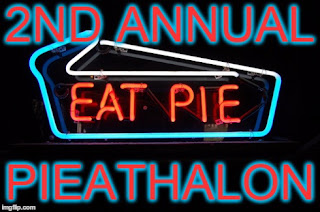 Posted by Poppy Crocker at 7:47 AM