From The General Electric Microwave Guide and Cookbook (1977), we get the name dad gave that potluck-ready Cheddar-topped casserole mom put behind the station wagon while she tried to load Jennifer and Michael into the back seat, then promptly forgot: 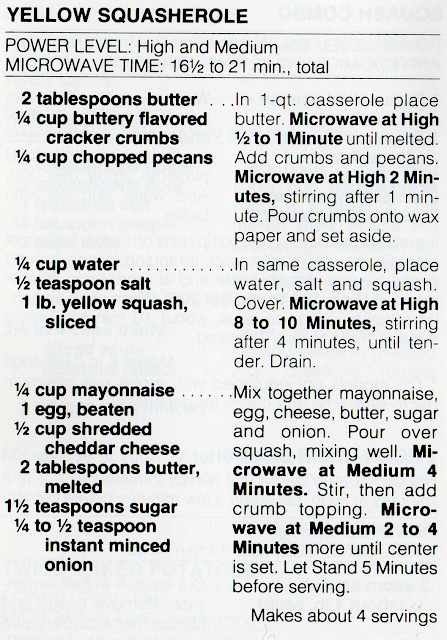 Mom is still not nearly as amused by the "Yellow Squasherole" incident. If dad would just help out once in a while, she'd still have her Woodland Pyrex casserole dish. 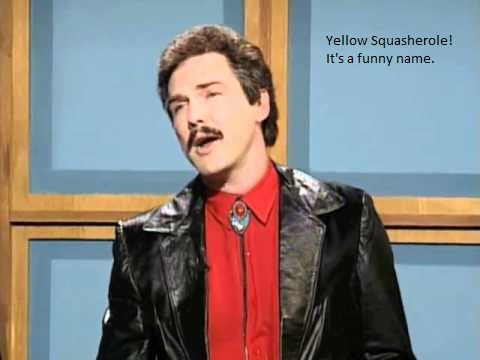 Are you ready for some blandness?

Awesome! (I'm assuming you screamed "YES!" like was a rock star ready to launch into a guitar solo rather than a boring middle-aged blogger of ancient cookbooks trying to get you pumped for recipes using bland lard.) 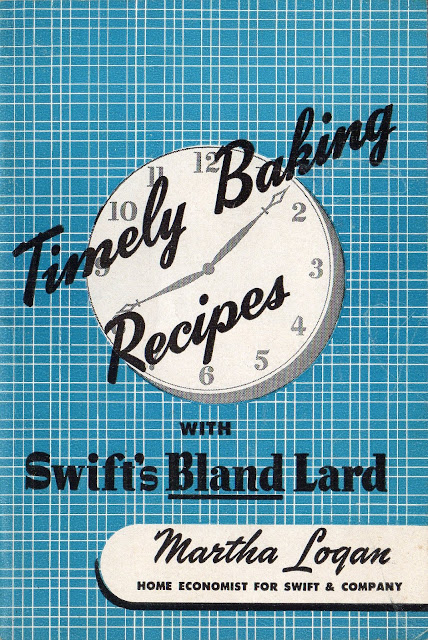 I love that "bland" is so exciting Swift felt compelled to underline it the same way my grandma underlines words like "love" or "best wishes" in greeting cards. I guess some brands of lard got pretty gamy?

In any case, the lard itself will not sink the recipes... just the other ingredients.

In fairness, since it's mostly a baked goods book, a lot of the recipes sound pretty tasty, if sometimes a bit impractical. 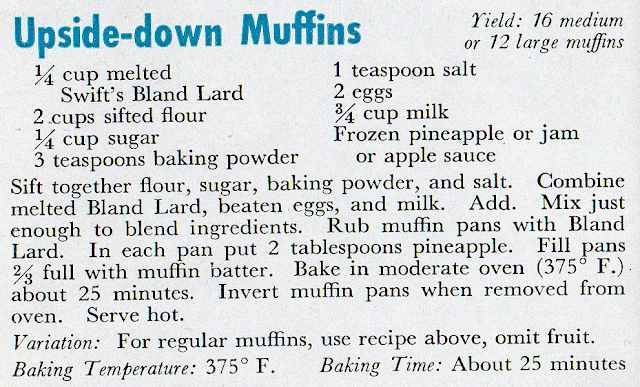 There's a reason upside-down cake is usually... well... cake. It's big and flat and easy to keep upside down. The muffins don't sound bad, but unless the tops are really damn flat (unlikely with a whole tablespoon of baking powder), they're going to end up tipping over and leaving gooey, sticky tracks all over the counter when they're dumped from the inverted pan.

And of course, if you're into those fake oysters made of corn fritters but find the corn on its own too boring, there are always

Peanut Butter Corn Oysters! Again, probably not terrible, but I can't think of too many peanut-butter-and-corn recipes, so these fall squarely into the odd category.

Plenty of recipes are not exactly what I imagine. If I say egg rolls, I'll bet you're imagining something you would get in a takeout box next to the General Tso's Chicken. That is not what Swift had in mind: 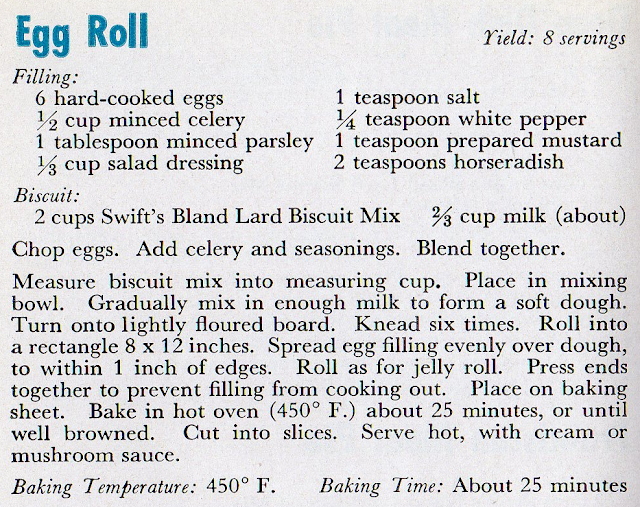 Unconventional egg rolls are only one of the exciting things you can make with hard boiled eggs and lard! 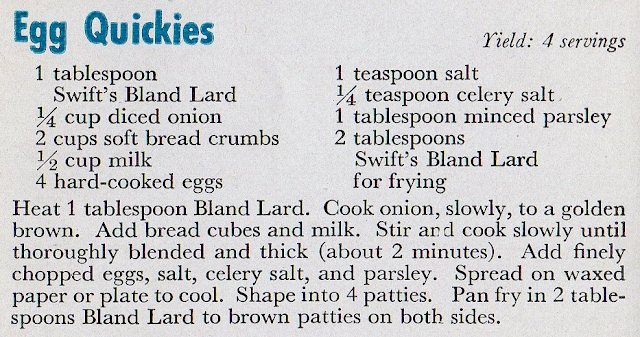 There are also Egg Quickies! And no, the meaning is not nearly as interesting as "quickie" might imply. I briefly considered making up a racier definition and adding it to Urban Dictionary, but I guess "hard boiled eggs mashed with bread cubes, onion, and milk, shaped into patties, and fried in lard" is weird enough on its own.

Well, that's enough blandness for one day. I'd better stop now so I'll still have energy for an egg quickie later. (I'll just leave that one to your imagination.)
Posted by Poppy Crocker at 6:45 AM No comments:

Yes, it's Valid Salmon Salad. I hear Margaret G. Mielke submitted the recipe to make up for her Counterfeit Banana Split (made with summer squash "bananas," scoops of mashed potato, and chicken and beef gravy toppings). 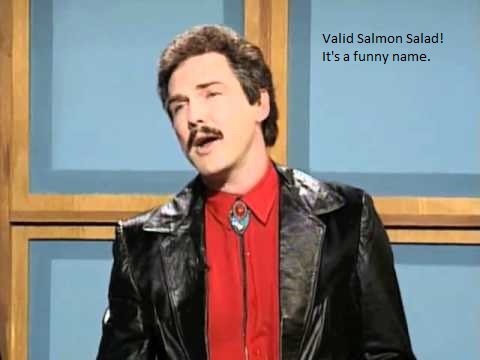 I've got something valuable for you today. 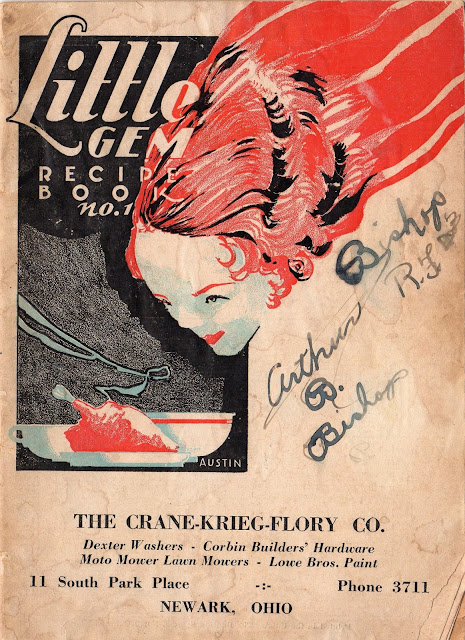 It's the July 1937 Little Gem Recipe Book no. 1 from the Crane-Krieg-Flory Co. If 1930s families in Newark, OH, needed hardware, washers, lawnmowers, or paint, apparently Crane-Krieg-Flory was the place to go.

Also, if anyone needs nightmares about a ghostly woman with long red hair (or maybe fire?) descending from the sky to devour dinner before anyone else can touch it, this is the booklet to get.

I'm not sure who Arthur B. Bishop was, but maybe he had secret fantasies about giant red-haired ladies. I am not here to judge. 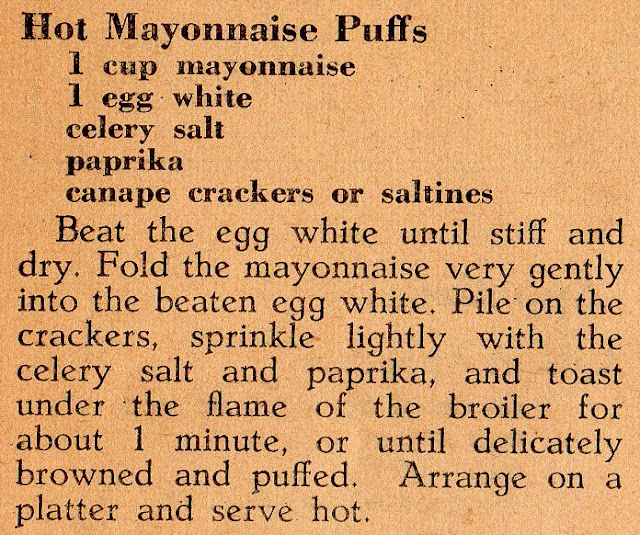 ...like Hot Mayonnaise Puffs, which is apparently a nicer name for mayonnaise meringue toasted atop crackers. Yum! (Just don't let Arthur make any, or that may not be mayonnaise, if you get my drift.)

There are also finger sandwiches: 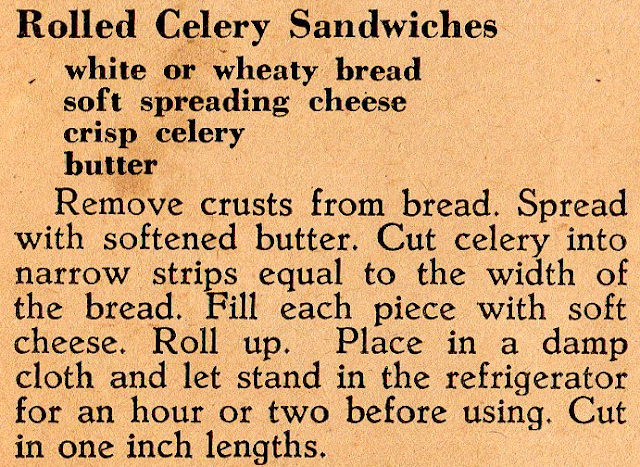 Yay! Damp bread rolled around celery with just enough soft cheese to make you regret tossing them in the trash after all the other appetizers have disappeared... except for the mayo meringues, which you won't regret tossing at all.

The booklet has the obligatory Jell-O salads: 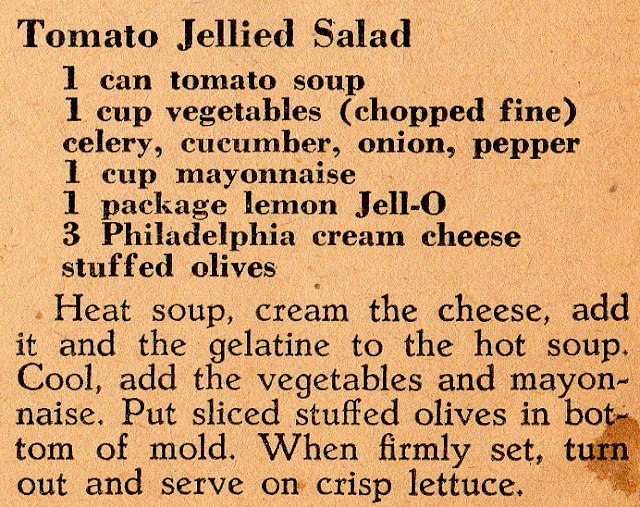 Then there are the weird but non-Jell-O-based salads: 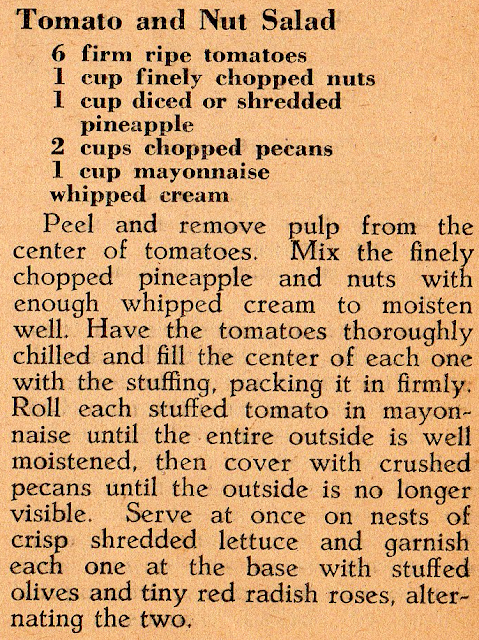 Like tomato shells stuffed with shredded pineapple and nuts, then rolled in mayonnaise and crushed pecans. (Maybe it's just because Easter was last weekend, but I imagine these being presented as Easter eggs in hell. They'd be round and white with mayo.)

The booklet offers largely flavor-free main dishes too, like this Chili Con "Carni": 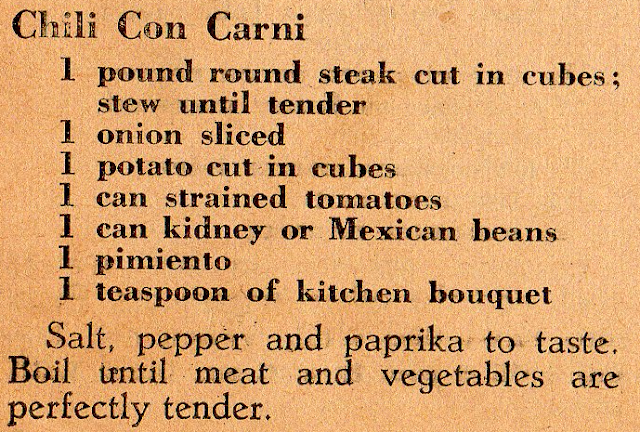 Apparently, chili simply means "Beef Stew with a Can of Kidney Beans Tossed In." Don't look for spices; that teaspoon of kitchen bouquet is as close as you're going to get.

You know, maybe letting that red-haired ghost steal dinner isn't such a bad idea after all. She can have  my full share of wadded-up celery sandwiches and mayo-slathered tomatoes filled with pineapple. Hell, I'll even let her eat men like air if she wants. Arthur B. Bishop would probably like that.
Posted by Poppy Crocker at 6:34 AM 2 comments:

Hey Patricia Cottontail! You might want to check the pH level. 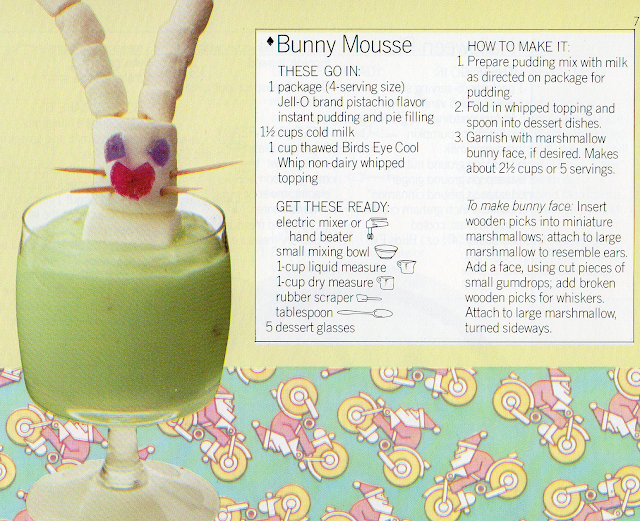 The best way to do that is with an extremely long-eared bunny relaxing in a very poorly maintained hot tub, apparently. Just watch out for bunny's whiskers! They bite back.

Oh, and if you're wondering why hot tub bunny has to share the page with Santa on a motorcycle, the book has different tablecloths to designate different chapters. Every holiday dessert gets the Santa tablecloth, so now all the bunnies, jack-o-lanterns, and sentient candy corn have another reason to resent the pudgy old guy for stealing the spotlight. Happy jumbled-up holidays!
Posted by Poppy Crocker at 9:22 AM 4 comments:

Fast meals for people with lots of lunch meat 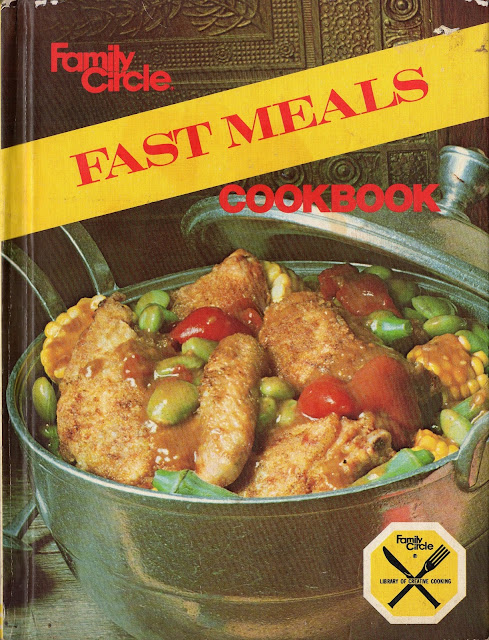 Family Circle Fast Meals Cookbook (1978) is coming at you, and it's got some... uh... interesting ideas about what constitutes a sandwich.

We'll start out with the healthy-sounding Mediterranean Medley... 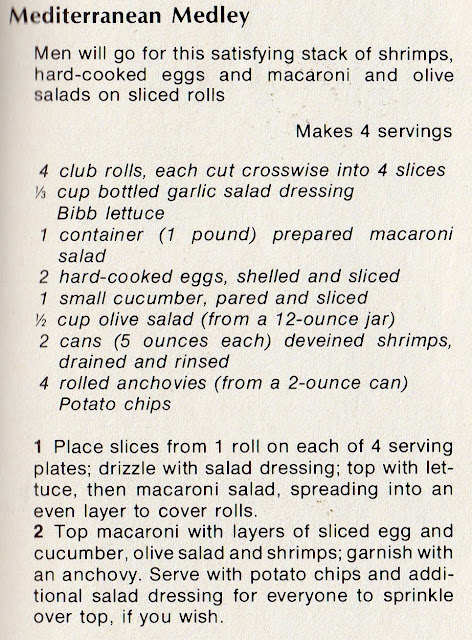 ...which is just a fancy name for deli macaroni salad plopped on a bun and topped with sliced egg, cucumber, jarred olive salad, canned shrimp, and anchovies. (Diners can slather this mound of nastiness with additional salad dressing as they see fit.)

I'm pretty sure when the doctors recommend a Mediterranean-style diet, they don't mean macaroni salad sandwiches.

The book also has a strange affinity for making sandwiches out of lunch meat slices rolled around other sandwich fillings.

Want to enjoy a deliciously salty and smoky ham sandwich? Well, Ham Bounty won't send you on the tried-and-true ham-n-cheese route. Instead, wrap some of those ham slices around the most cat-foody of all dining options-- tuna salad-- and the rest of the slices around (why the hell not?) cold canned green beans.

Now instead of the satisfying simplicity of a typical ham sandwich, you can ruin the ham with nasty fillings and run the risk of the filling shooting out the end of a ham roll and landing on your shirt. It's a real lose-lose!

If you prefer your cold cut roll-ups to look a little jauntier and taste a little slaw-ier, there is always this option: 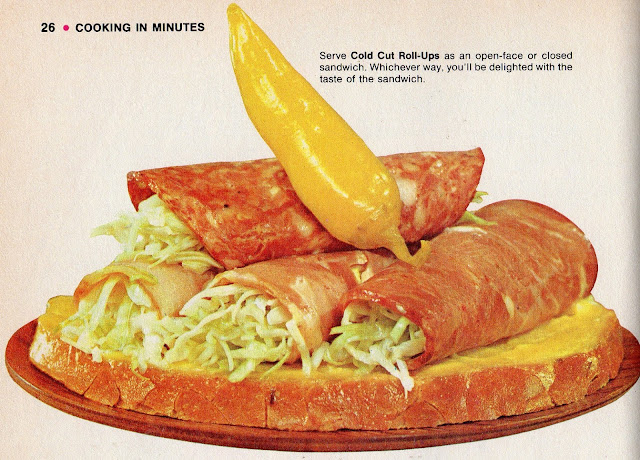 I have to admit that I am in love with the yellow wax pepper . Kind of feels as if the sandwich is trying to give us the finger. 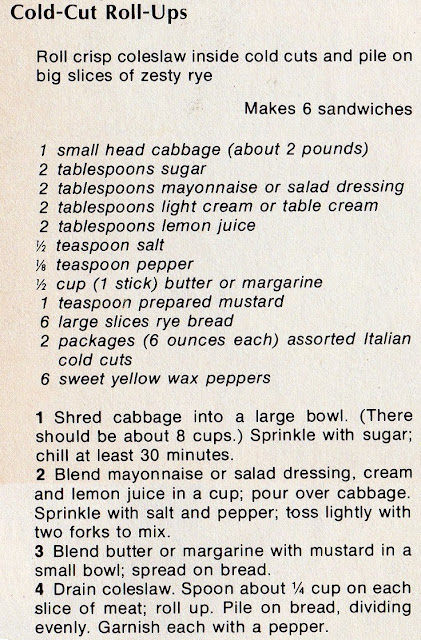 This time, the cold cuts are "assorted Italian" and the filling is cole slaw, but the soggy, oily risks to your shirt are exactly the same.

The book isn't entirely filled with terrible sandwiches, though. Here's a '70s version of meat-lovers' pizza: 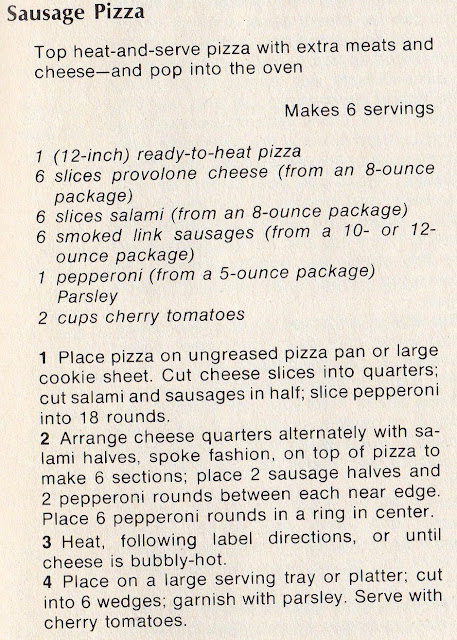 Provolone, salami, smoked link sausages, pepperoni-- all piled on top of a "ready-to-heat" pizza so it will taste at least kind of homemade.

The part I love, though, is serving it with the cherry tomatoes. No, it's not a super-surprising or disgusting move, but look at how they serve the tomatoes in the picture: 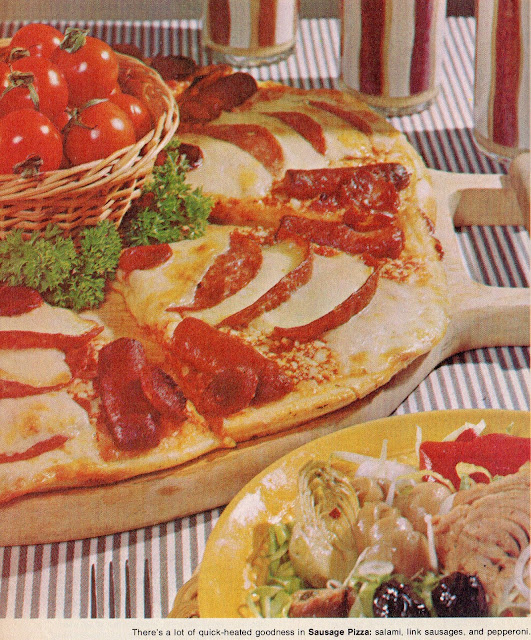 Put them in a basket and plop that basket right down in the middle of the nice hot cheese!

(Okay, if you look closely, you'll see that they've pulled the pizza apart and the basket is not actually right on top, but I wanted you to do the same double-take as I did.)

Happy Wednesday! I'm going to go wrap some Tofurky Italian deli slices around some Watergate salad and serve them on bread topped with a big scoop of German potato salad. Ha!
Posted by Poppy Crocker at 6:43 AM 2 comments: 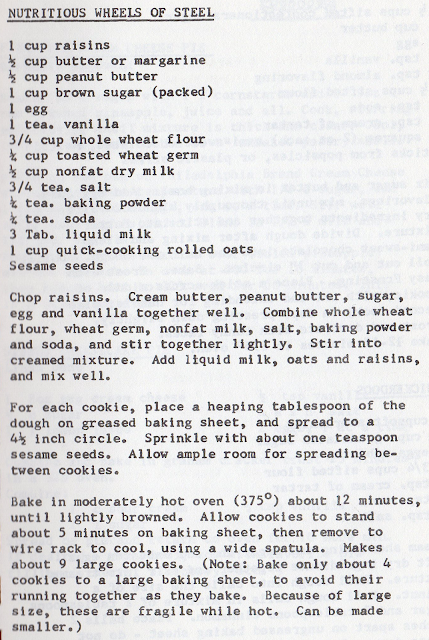 I'd be more than a little bit worried about my teeth, but the title assures me that Wheels of Steel are, indeed, nutritious. Apparently it's worth your while to chew steel. 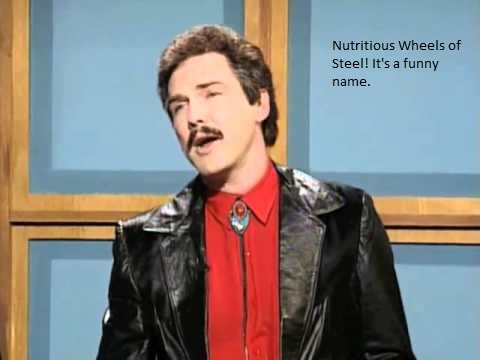 The new month means a big new batch of foil-tastic shinies from 401 Party and Holiday Ideas from Alcoa (1971). In this book, April means cute and/or creepy and/or cutely creepy Easter creations.

Mostly on the cute side are Nest Eggs: 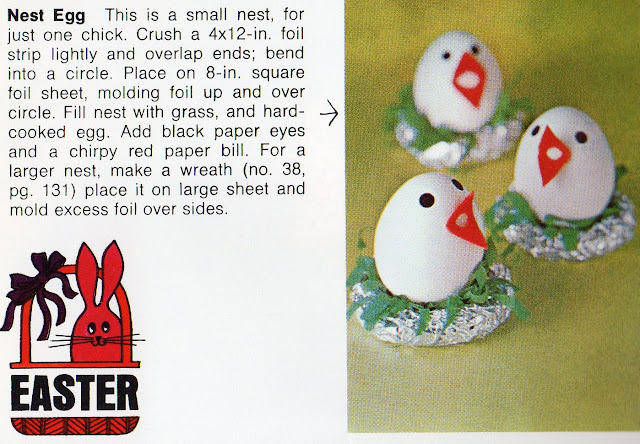 The blank eyes and wide-open "feed me!" mouth certainly give the baby bird vibe. 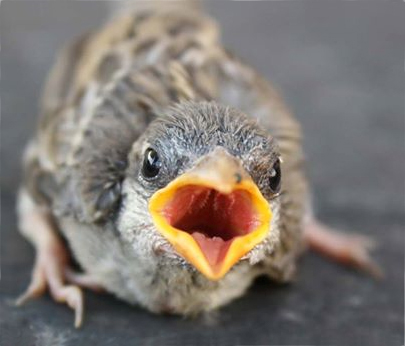 The foil open-on-all-sides nests make them a little too obvious to predators, so Nest Eggs don't usually grow up into real birds. The ones that do, though, are also more than a touch creepy:

Egg Warmers answer the eternal question, "Why did the foil chicken lay its head in the road?"

The answer, I guess, is so it could be smashed into a two-dimensional breakfast table decoration that will haunt the children for years to come.

The most ambitious (and least likely to work) project for Easter is to make a rabbit cake by making your own mold using foil: 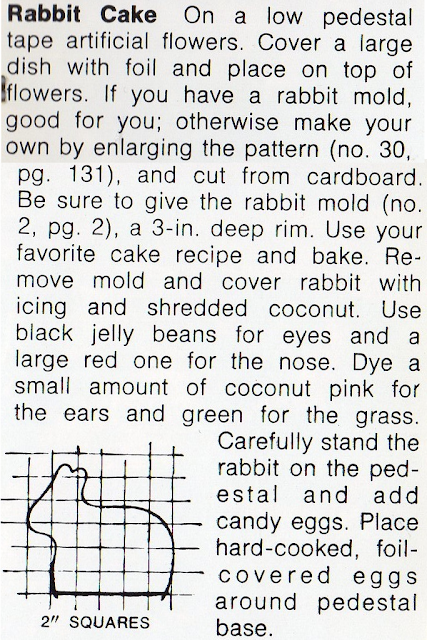 You might look at the pattern and think, "Well, that could potentially make a reasonable rabbit cake (or maybe a cake of a duck leaning back in a hot tub)" if you are willing to buy the fiction that wrapping cardboard in a few layers of foil will somehow lead to a functional cake pan.

I can assure you, though, that the cake would not look like the one in the picture: 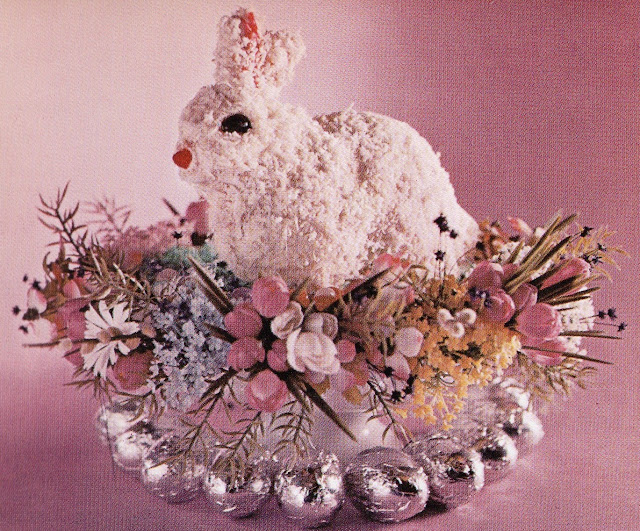 With its sculpted face, ears, and plump little bunny body, this little guy was clearly made with a rabbit mold.

My favorite Easter treats in this section also happen to be the ones without directions: 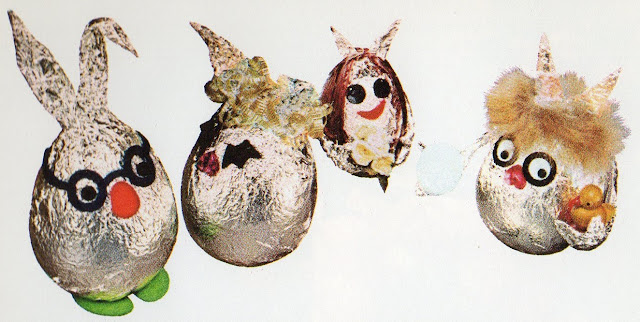 They're the foil egg... things! The one on the left is clearly an adorably nerdy bunny. Then we get to... an egg with knockoff Bat Symbol eyes? (Some diabolical device from Egghead, perhaps?) Then we've got... I don't know... maybe Patricia Krenwinkel with devil horns? And lastly, a punk-rock owl eyeing the duckling she has just scooped up for a nice Easter brunch.

Such a sweet holiday tableau! Enjoy it in your nightmares for years to come!
Posted by Poppy Crocker at 6:40 AM 2 comments:

From Ranchers Beef Recipes (1977), the recipe title that was voted "Sounds Most Like a Rejected Chef Boyardee Offering":

ZuBeefi! I'm guessing it would be like Beefaroni with animal-shaped pasta and a few shreds of zucchini. 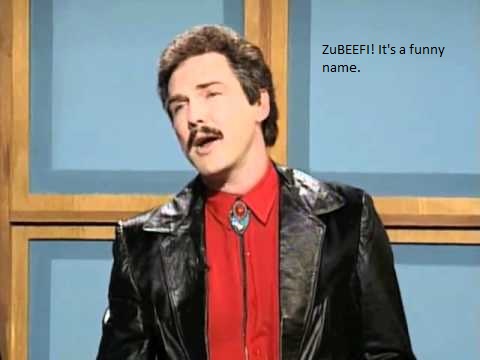