The levitating cow head, queen of the damned, and other wonders 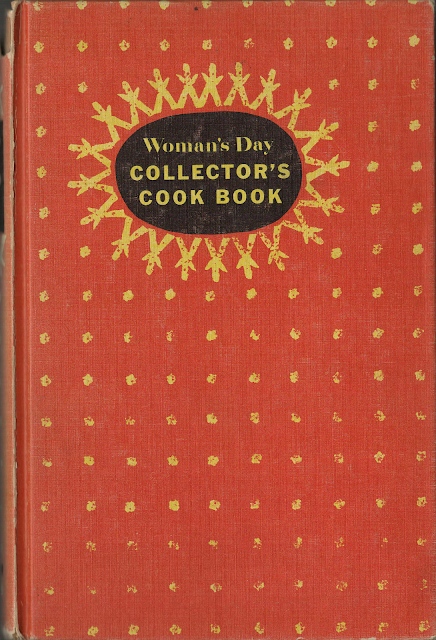 I'm definitely a collector, so I needed a copy of Woman's Day Collector's Cook Book (1960). Of course, it doesn't specify what kind of collector, so if this is a cookbook for collectors of Faberge eggs or plastic flamingos, I should have left it at the antique mall. If it's for toy dinosaur collectors or, more logically, recipe collectors, I'm all set...

One thing that drew me to this book is the pictures that begin the chapters. A few are just funny or charming, like this guy from the lamb chapter:

I can't quite make out what this lamb is supposed to be. The hat floating just above his head reminds me a little of a pilgrim hat, and the robes look more like they are from the far east. Is the lamb smelling a flower? Getting ready to devour some clover?  Standing on a balcony, getting ready to cast this bit of a plant into the adoring crowd gathered below? And why is the lamb's nose apparently melting off? All good questions, left for me to ponder.

What do the lamb recipes look like? Well, here's one that left me laughing: 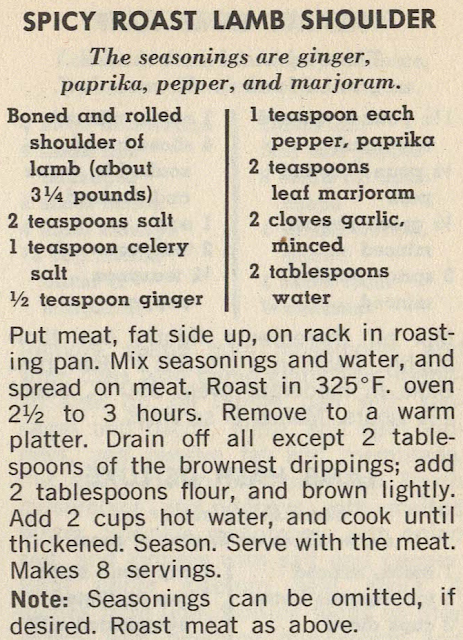 I'll admit, there's nothing inherently funny about Spicy Roast Lamb Shoulder as long as one is willing to accept that "spicy" did not generally mean "hot" in the '60s. It meant that the cook had to actually dig out a few seasonings beyond salt and pepper. (Ooh! Paprika, ginger, and marjoram!)

The recipe itself is not really funny at all-- until you get to the note at the end: "Seasonings can be omitted, if desired." I love that the one selling point in the recipe title is apparently also seen as a liability! Feel free to leave out the one aspect that we thought might make the recipe seem interesting in the first place...

While the funny/charming pictures are nice, I really dig the ones that are a bit more... shall we say... unsettling. 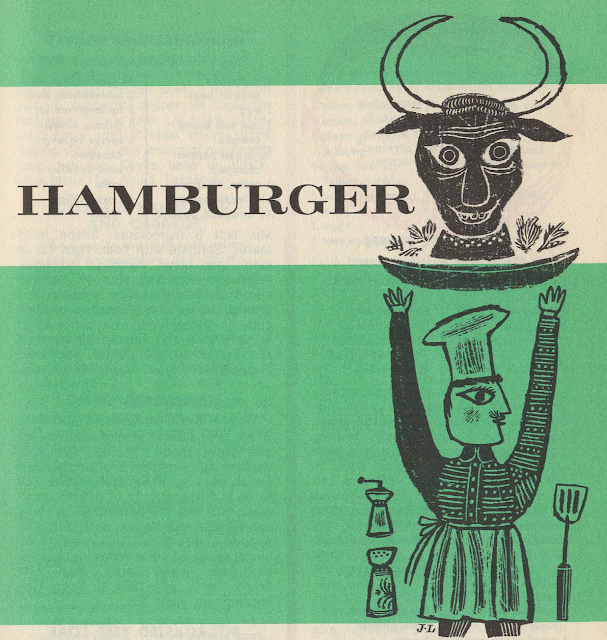 Well, here's one offering from the Hamburger chapter: 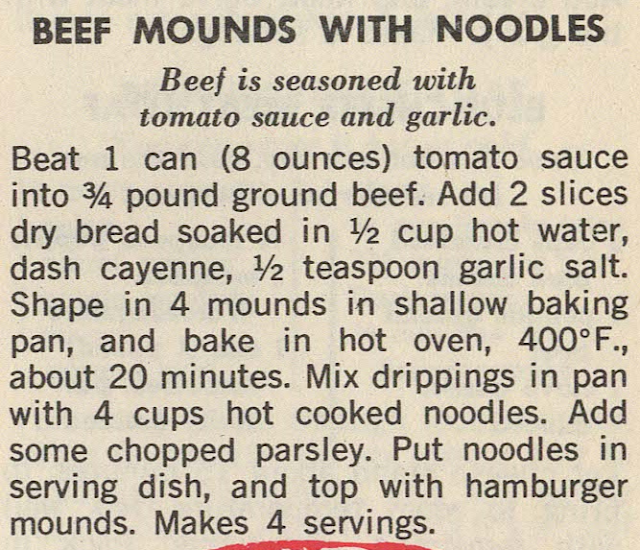 Beef Mounds with Noodles certainly calls for reasonable-sounding ingredients. It's kind of a weird variation of spaghetti with meat sauce. I just picked it because of the name. My grandparents raised cattle and used to refer to them as "beeves" (well before they actually made the transition from cow to beef), so beef mounds... Well, it sounds like this should be a recipe you could make by setting plates of noodles out in the pasture and waiting for Bessie to let loose. 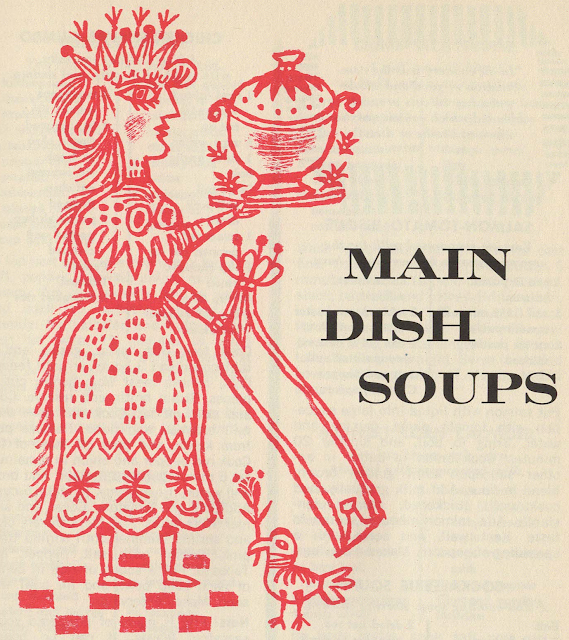 This woman with the enormous eye might be some kind of royalty, since she appears to be wearing a crown... Or maybe she's a magician, since she is nearly levitating a heavy tureen while simultaneously getting a bird to offer her a flower... Or maybe she's a mutant since she might have two more eyes on her chest (instead of boobs?)... And her dress is either growing a nice coat of hair on the back or emitting some powerful stink rays... It has been rumored that staring at this picture for too long can actually drive a person insane.

What kind of main dish soups does this mystery woman offer? Here's one: 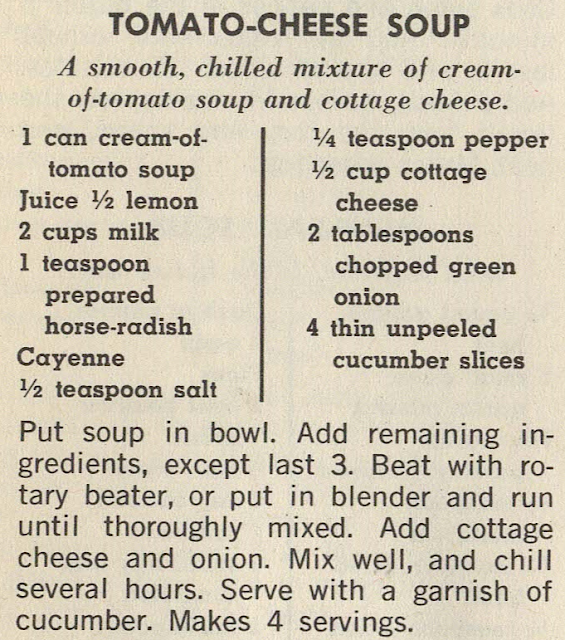 It's a nice cold soup for summer when you're sick of gazpacho. Just blend a can of cream of tomato soup with lemon juice, milk, and horseradish, then stir in a nice mound of cottage cheese! Garnish with cucumbers and shame....

What makes this recipe even sadder is that the book precedes it with this cheery little saying: 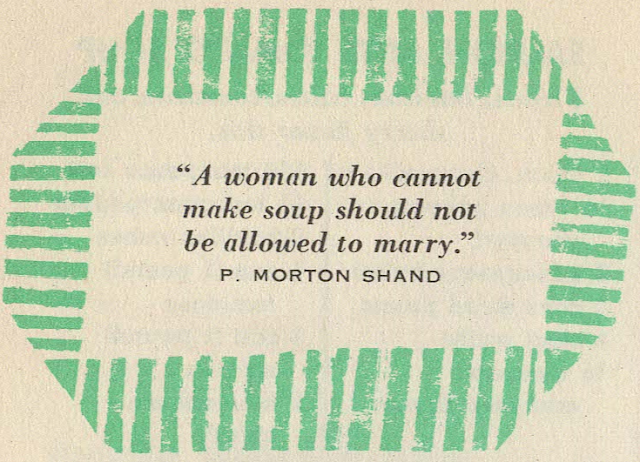 I choose to assume the end of the saying was cut off, and we're missing the part that said "because clearly, she has more important priorities than learning the art of soup making. We as a society shouldn't try to tether her to a loser who will expect her to waste all her potential mixing canned soup and cottage cheese for his sorry ass."

What do you think? Feel free to add your own ending to this saying, or to make up your own.
Posted by Poppy Crocker at 6:23 AM