I've been so surprised and happy to see that '70s Dinner Party has enjoyed some of my images, but I was really shocked to see that their tweet of this post from year-end 2016 inspired a grove of good luck lemon piglets for 2018!

Now that I'm done with Glamour Magazine's New After Five Cookbook, I wanted to pick a new book to go through in 2017. I'll admit, the book I chose is cheating just a little because it's not exactly a cookbook! 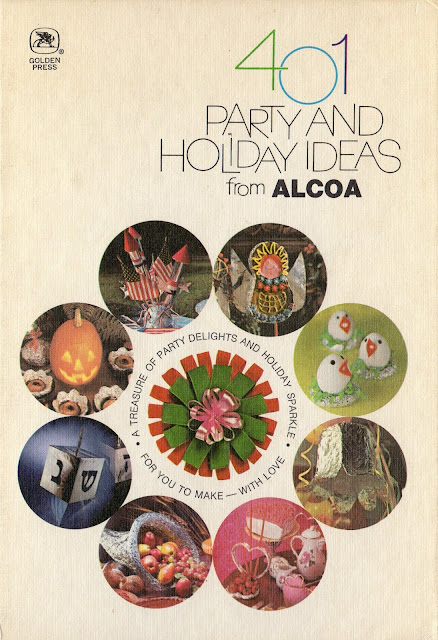 401 Party and Holiday Ideas from Alcoa (Conny von Hagen, 1971) is primarily a book dedicated to the proposition that parties would be far more festive if hosts would simply wrap every square inch of their homes in aluminum foil beforehand. (Alcoa, in case you're wondering, is the shortened name for Aluminum Company of America, It's all making sense now, isn't it?)

If you really need a justification for a foil-shilling book as my year's pick:
1. There are a few actual recipes in here, so hey, it's a cookbook.
2. The foil creations are so weird that I just couldn't keep this to myself.
3. This is the same size and has the same spiral binding as many of the smaller Betty Crocker offerings (like Betty Crocker's Cooking Calendar), so it's an honorary cookbook.

Since the first entry is for New Year's celebrations, I'm going to post it a day early so you'll have time to coat your lampshades in aluminum foil before midnight if the spirit moves you.

Here is what an Alcoa New Year's party should look like: 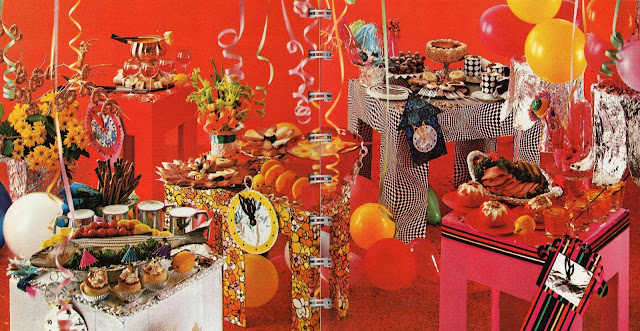 With all the curling ribbon dangling down in the foreground, it's a bit hard to see just how much of this spread is covered with foil, but it's everywhere. At least you can see the foil-y clocks pinned to the front of each table, and maybe you will eventually realize that the lampshades and even some of the serving platters have a weird, crinkly metallic sheen.

If you want to give a shiny twist to the old cliche of the drunk wearing the lampshade by the end of the party, here are the instructions for making your new chapeau (or vase, since they're pretty much the same thing, according to the directions): 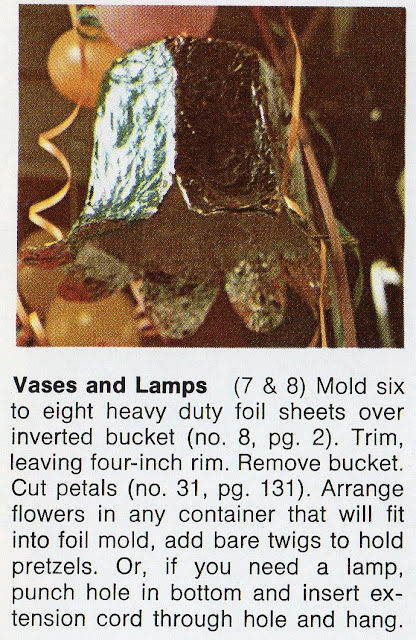 Just mold sheets of heavy-duty foil over a bucket and trim it to make petals!

For the vase, "Arrange flowers in any container that will fit into foil mold, add bare twigs to hold pretzels."

Yep. Apparently for a New Year's party, besides foil lampshades, one also needs foil vases full of flowers and pretzels on sticks, like so: 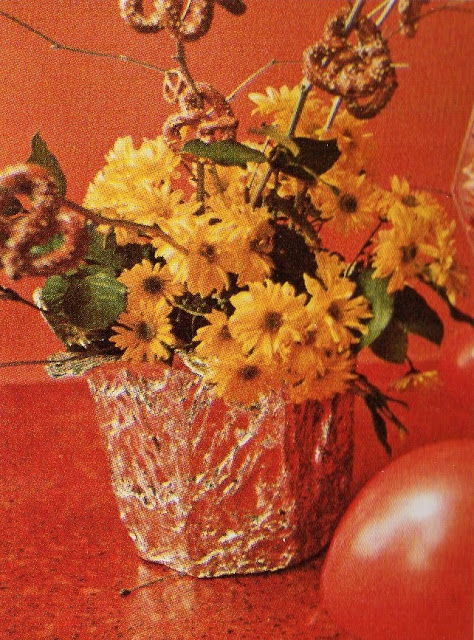 I mean, every time I walk by a flower arrangement, I think about how much better it would be if I could also eat pretzels that had been suspended on sticks above it. Don't you?

A few ideas are actually kind of cute, like this little guy: 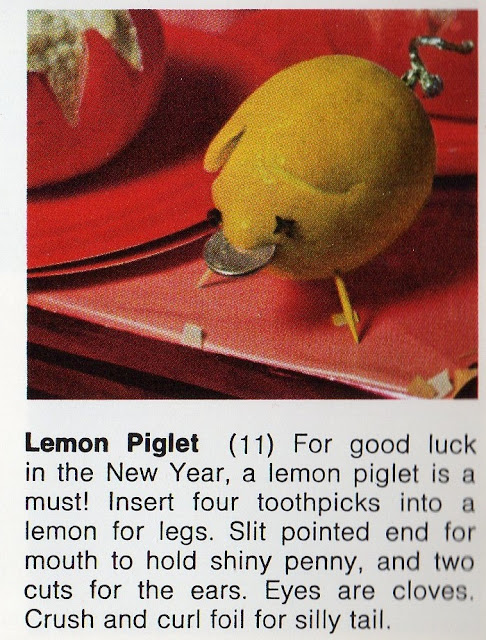 Of course you need a lemon piglet for good luck in the New Year! This decoration is a real anomaly too, as it's not got much aluminum in it-- just the curly little tail!

And yes, as promised, there are some actual recipes. The lemon piglet is perched next to some Stuffed Tomatoes: 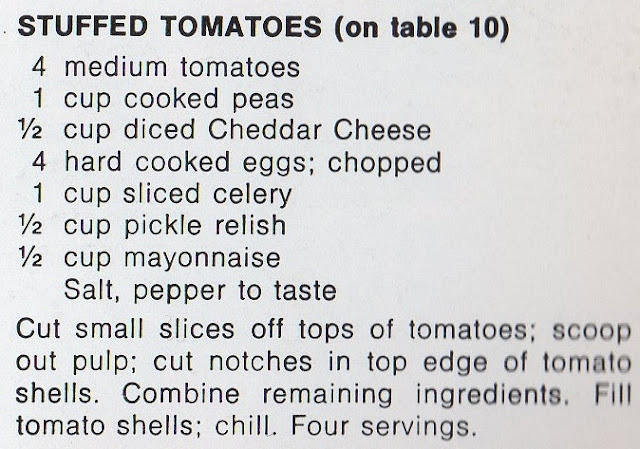 I'll admit, I'm not a fan of any mayonnaise-based salads, so this hybrid of pea and egg salads crammed into raw tomatoes leaves me-- like the salad-- cold. Your mileage may vary.

As far as I'm concerned, the scariest-looking thing on the menu is under the pretzel-flower arrangement on the bottom left of the party picture: 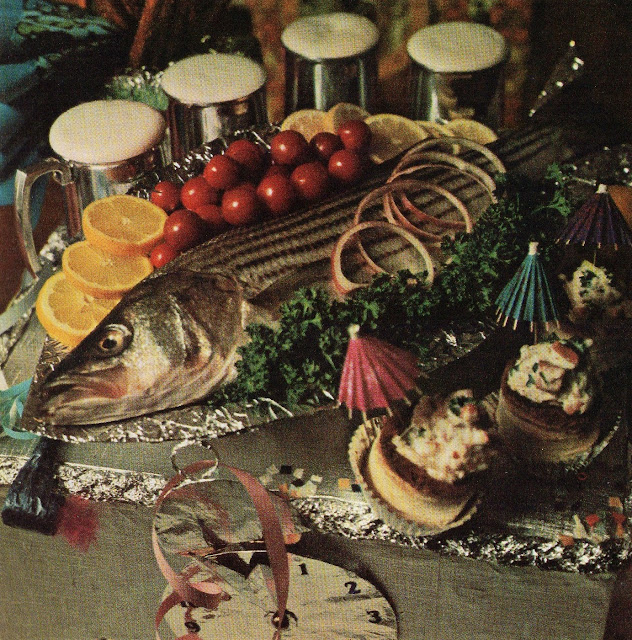 The poor fish looks mortified to have woken up on a foil platter mounded with lemons and leaf lettuce, and fronted by some kind of little appetizer-type things convinced that they are really tiki cocktails. Is there any way to slide off of the platter and into the nearest body of water without drawing too much attention? 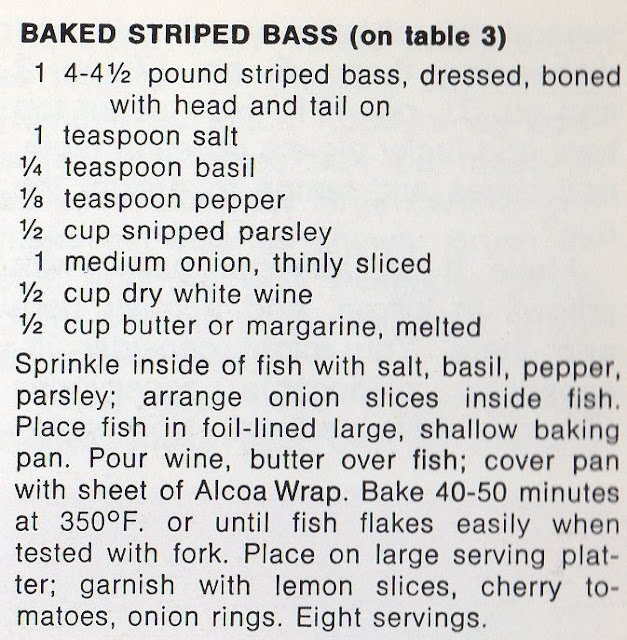 There's not much chance of getting very far if one's guts are ripped out and replaced with seasonings and sliced onion, though.

Even though the last recipe I'm listing probably tastes fine, the name is enough to make me write a new song (to the tune of "Brick House"):