Learn about the exciting vegetables of Fort Wayne!

Gourmet's Delight is another very short community fundraiser cookbook, this one a 1964 attempt by the Fort Wayne Woman's Club to raise money. (Don't ask me which Fort Wayne woman thought she was a club all by herself. The book didn't specify.) 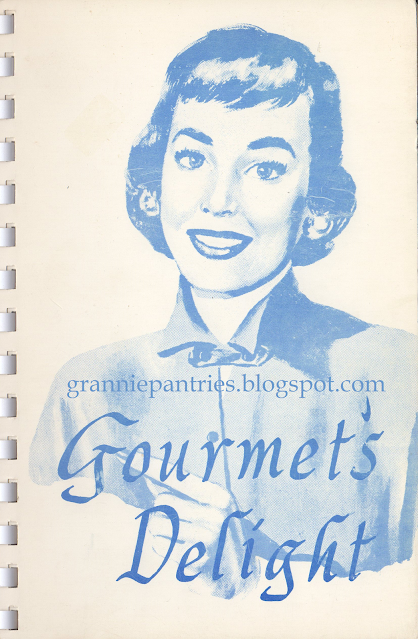 I imagine that's her picture on the cover, though. 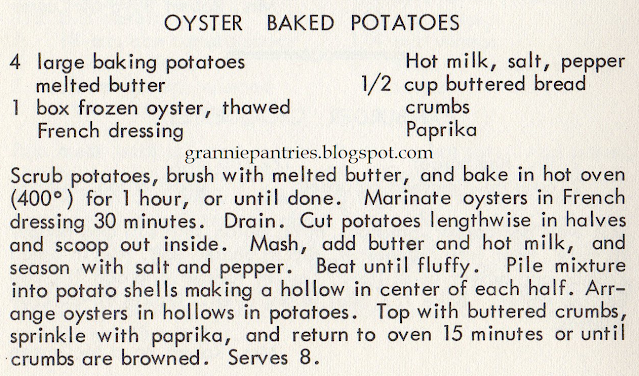 They're filled with oysters marinated in French dressing! Okay, I'm sure that sounds good to some of you, but even you, I assume, would want to know to expect oysters instead of cheese....

Rather than going with the traditional 1960s Eye-talian treatment of eggplant, the Fort Wayners opted to go Mexican.

Mexican, in this rendition, means simmered in some chili powder-laced water, then topped with sour cream. I have to admit that the Fort Waynians did seem to have a more expansive idea of Mexican food than people who wrote my other community cookbooks from the midwest. Rather than offering up tamale pie and taco salad, they had Egg Plant a la Mexican Way and this little beauty, which was in a specially labeled Mexican section: Lamb basted in a sweet syrup and braised under a layer of kumquats and bananas is definitely not a typical Taco Tuesday!

I should get back on track with the vegetable selections, though. Don't worry if they don't appeal to you so far. I have a feeling this last one will sound pretty good. Who knew that Pecan Spice Cookies count as a or salad? Fort Wayniacs are so far ahead on their calling a dessert a salad game that they just straight-up declare cookies to be a salad (or vegetable, maybe?). Hey! The recipe includes nuts. That counts for something, right?

Okay, fine. I'm pretty sure that the person in charge of the chapter headings just messed up and changed the heading to "Cookies" a page too late. I still like to imagine cookies count as a salad in Fort Wayne. The city needs something to make it interesting right?

Posted by Poppy Crocker at 9:07 AM