Hemlock recipes... No! I just mean they're FROM Hemlock, not made with it.

I always worry when I come across cookbooks with super-generic names at antique malls or thrift stores. I know I have fundraising cookbooks named Our Favorite Recipes, but do I have this particular one? In today's case, Our Favorite Recipes came from the publishing classes in Miller High School of Hemlock, Ohio. (It's undated, but the recipe for Jimmy Carter Cookies means it's probably from the mid-to-late '70s.) 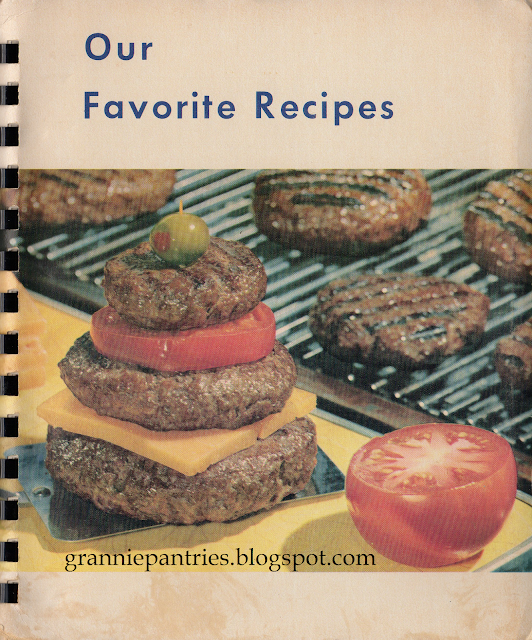 The generic-looking stack of grilled burgers on the cover didn't do much to help me figure out whether this was already in my collection, so I checked the blog on my phone while I was in the antique mall and couldn't find anything from Hemlock, Ohio. (Of course, I haven't posted about probably half the books I own, so there's still a chance this is really my second (or third!) copy.)

In any case, my impression upon browsing the book made me wonder if words had any meaning in Hemlock, Ohio. Like, when I hear "quick dinner," I imagine something that will take less than 20 minutes and be a full meal. In Hemlock, though...

...a quick beef dinner takes 2-1/2 hours minimum, and it's only really the protein. You've still got to make noodles or potatoes and a veggie. I suppose I'm being a bit unfair in looking at this menu through today's lens, as "quick" back then meant not a lot of hands-on time. Throwing something in the oven for a couple hours while you ran errands or ironed stacks and stacks of laundry was more practical than it would be now, when most people are gone most of the day and something needing a few hours of bake time is a big ask.

It wasn't just the "quick" recipes that made me question Hemlockians' grasp of language, though. I am used to seeing "Chinese" recipes from midwestern towns with an extreme lack of awareness of what Chinese cooking might actually entail, so I guess I shouldn't have been too surprised to find this beet recipe.

How does adding catsup and vanilla to pickled beets make them Chinese? I tried checking online and learned only that I should blame Heloise, not Hemlockites, for this one. We might be able to pin the idea of serving "Chinese" beets over cottage cheese on the good people of Hemlock, though.

I also discovered a penchant for giving new names to things that already have names. For instance, most of us would just call this a recipe for a chili dog.

If you told me you were serving bean boats, I'd assume it meant something like baked beans in potato skins, not a chili dog. The real kicker, though, is that beans are the only ingredient listed as optional in the recipe. (The chili has to have meat, not beans.) Serving somebody a bean boat with no beans is just a mindfuck. Why give something a new name it doesn't really need when the new name doesn't even apply all that well?

Occasionally, though, the names are very literal. If the cook wants to impress you with their imaginative ingredient lists (or warn you that cookies aren't always good!), they just might be very up-front with the naming.

You can't claim you didn't know what you were getting into when you're told it's a Raisin Catsup Cookie!

And Hemlockovites are serious about their cookies, too! If you're worried that there won't be enough to go around, you can always make a bushel of cookies.

Yep! "Bushel Cookies" makes one bushel of cookies! I think this is the first recipe I've written about that measures the baking powder and baking soda in ounces.

I also really hope cooks are smart enough to figure out that the cookies are probably supposed to be dropped on cookie sheets and baked in batches. The instructions are not very specific. Trying to dump this entire lake of dough onto a single greased cookie sheet would flood the kitchen and/or oven (which I'm assuming is supposed to be used for some length of time, given that it was heated to 300-350 degrees)! Maybe the "friend" who sent this recipe in was just being so vague in the hopes of hearing about someone's massive cookie fail. (Okay, I know that recipe writers just tended to presuppose that everybody basically knew how to cook and there was no need to hold their hands by fully explaining what they were supposed to do. I still like imagining the possible catastrophic outcomes.)

Maybe I'm being too hard on the publishing classes in Miller High School, but remember, they're the ones who put raisins and catsup in cookies.