Great Grains! (not the cereal)

Sorry, but I am feeling pretty nostalgic this week. My favorite thing about summer vacation when I was a kid was 4-H projects. (Well, it was once I figured out that I sucked mightily at sewing projects and that I should stick with cooking projects. I could wrestle with fabric for hours and end up crying over a puckered mess that would be hell to try to model at judging, and my incompetence with shears meant that sometimes I had to add an iron-on patch to the inside of the garment to try to hide the hole-- a fact that the judges never missed. My little sister was a wiz at sewing, but I was waaay happier when I finally gave up.)

No, my specialty was cooking projects. I won't claim that I was a particularly spectacular at them either-- although I did occasionally win ribbons for being in the top 10% at the state fair-- but I liked learning the science of cooking, and even recipes that didn't work out well didn't feel so cataclysmic. I'd make them for dinner, we'd fall back on peanut butter sandwiches if the results were truly appalling, and I would know to make a different recipe to bring to judging. Judging usually came near the end of July-- right about now-- so I've been remembering the frantic rush to memorize the functions that eggs serve in recipes, or the perfect kneading technique, and the monumental decision of what recipe to cook and serve the judge. It had to travel well; it had to taste good; it shouldn't be too easy to mess up, but still difficult enough to look impressive. I would lie awake nights trying to plan it all.

Unfortunately, I've lost most of my 4-H project books in various moves, but I came across one and couldn't resist writing about a couple of the recipes. The Great Grains project book is relatively new-- 1986-- but I'm letting it in anyway. The project was meant to teach about various types of grains and their places in cultures around the world. I made all kinds of things: croissants, blini, tortillas, Scotch broth, fried rice. These are the two recipes I remember best, though, probably because I had the most trouble! 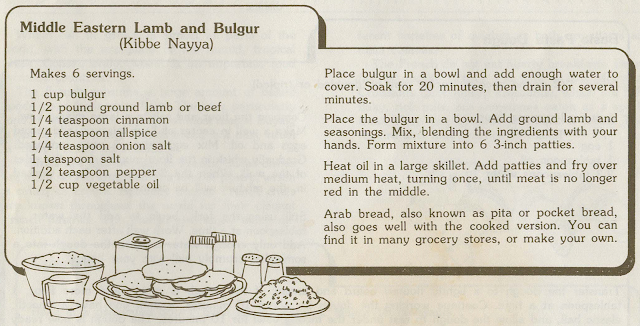 I've read many times that simply soaking bulgur for 20-30 minutes is supposed to hydrate it enough for recipes like this. I don't know what the issue was. Maybe my bulgur was too coarse or too old. Maybe I was supposed to use hotter water. In any case, I might as well not have bothered because the bulgur stayed rock hard. I remember my family trying to eat what amounted to VERY crunchy and oily hamburger patties. It was like they were full of gravel. I think this was one of the nights we finally decided to save our teeth and bust out the old reliable government peanut butter.

By the time I got to this recipe, I was better at thinking on my feet: 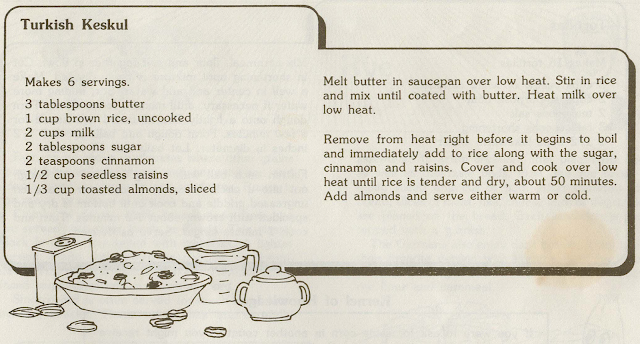 After the Kibbe Nayya fiasco, I knew to keep checking my grain. Maybe I had the temperature set too high, or maybe the rice was old, but I remember discovering the liquid was gone WAY before the rice was done. I could have ended up with a pan full of inedibly crunchy rice, a pan full of burned (and still crunchy) rice, or I could try to fix it-- so I added extra milk and kept checking as it cooked. It turned out fine! My mom liked rice pudding-type recipes and raisins a lot more than I do, so I let her have most of the batch, but I was proud of myself for figuring out my own cooking problem. I actually did decide to make this recipe for judging. (Plus I knew the judge would have way fewer criteria to check for this recipe than on, say, a croissant, where she might evaluate the layering, the shaping, the browning, the crumb structure, etc. For this recipe, I just had to make sure the rice was tender and not burned. I was no dummy.) I'm pretty sure I placed in this project, but I'm not sure what it was. I just remember being excited about perfecting a recipe on my own.

Happy Saturday from Kernel of Knowledge, the project mascot! Now you know what a grain of wheat with creepy eyes looks like. You can thank me later.
Posted by Poppy Crocker at 10:32 AM