Recipes that call for humility

I picked up who'll do the dishes (Columbus Alumnae of Kappa Alpha Theta, April 1960) because I loved the cover. The goblet looks as if it holds almost as much as the teakettle, and they both (along with a bottomless frying pan and embroidered kitchen towel) float in midair above the cafe curtains. They're all part of a haunted kitchen ensemble! I want a skeleton to show up and try to fry a ghost egg.

I also love the stubbornly lower-case font and the absence of a question mark when the title seems pretty clearly intended as a question. (The admission that nobody really wants to volunteer for dish duty is pretty great too!)

What I didn't realize when I got this little book was that the cover's suggestion that the women of Kappa Alpha Theta rarely paid attention to their English teachers carried through to the recipes. To be fair, the recipes themselves are usually more sophisticated than the cream of mushroom soup, overcooked noodles, and canned veggie casseroles in a lot of the other regional cookbooks, so maybe that's enough to make up for a little bit of trouble with things like spelling: 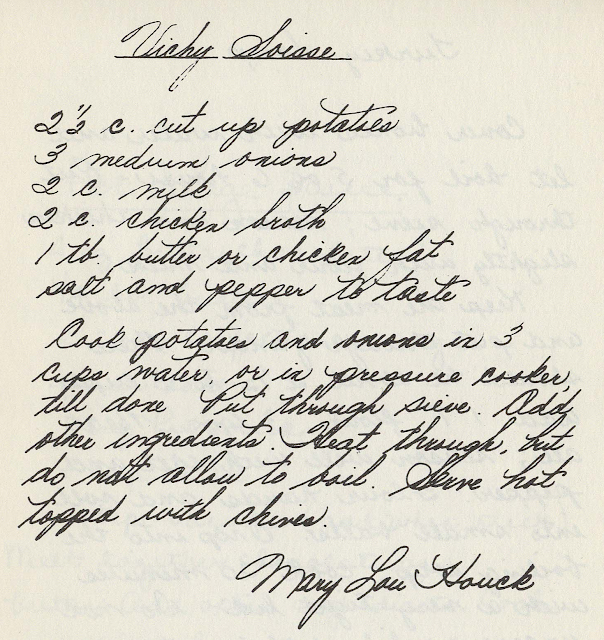 Honestly, I wasn't sure how to spell vichyssoise when I saw this recipe, but I was pretty certain it was all one word. You know what I did? I looked it up! So while I'm impressed that Mary Lou Houck wanted to send a vichyssoise recipe as her contribution, I would also think the knowledge that this recipe would be published might inspire her to actually find out how to spell it. (I also notice that this version has no leeks, one of the central components of the soup, but I can't quite bring myself to make fun of the omission because I don't know how hard it was to find leeks in 1960's Columbus. Maybe the best you could hope for was some onions?)

Some of the misspellings are more entertaining: 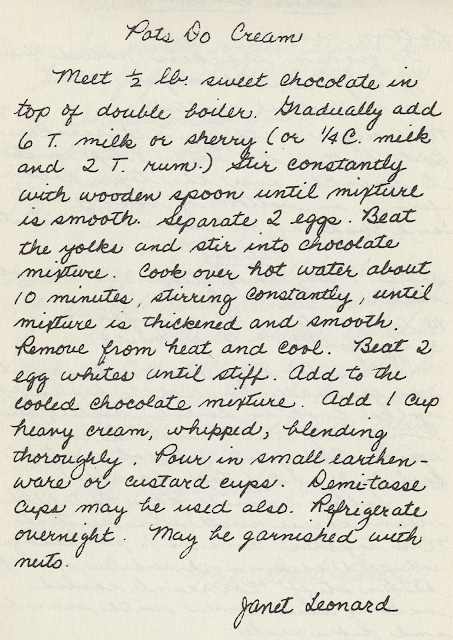 When I saw "Pots Do Cream," I immediately had a mental picture of some pots gathered together in an unobtrusive nook of the kitchen, taking turns using a misappropriated straw to snort cream out of a shallow silver platter before they headed out to the dance floor....

Even if Janet Leonard didn't know this was supposed to be pots de creme, at least all the individual words in her recipe title would be spelled right in a different context. This isn't a hopelessly bastardized version either, like ones that would call for things like pudding mix or gelatin. 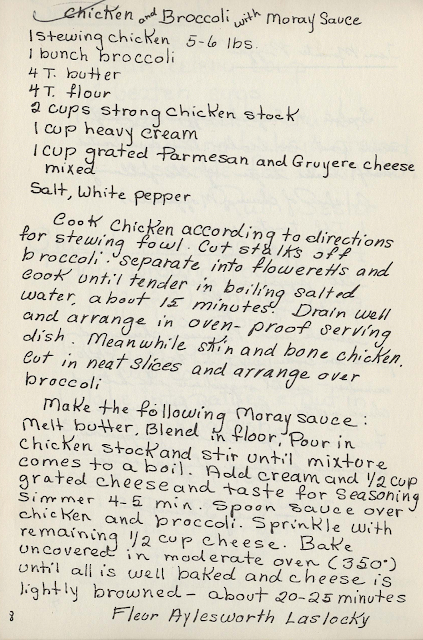 Chicken and Broccoli with Moray Sauce! Mornay sauce is the more traditional choice, but eel sauce might have a bit more bite.... You'd just need to be careful because from what I've read, moray eels can be poisonous depending on what they've eaten.

Lest I get too high-and-mighty, the writers of the book also humbled me. When I saw this recipe... 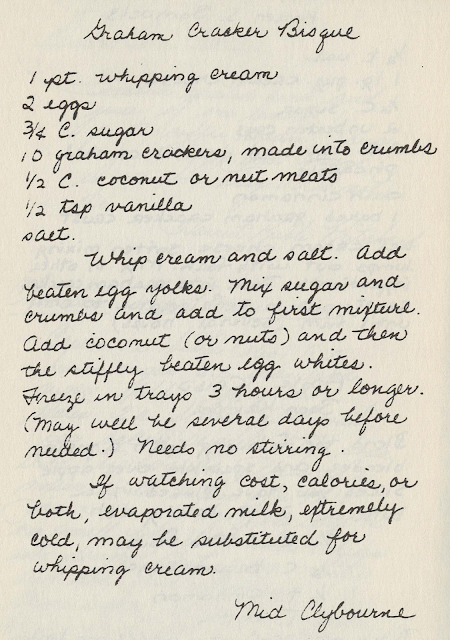 Then I saw the actual recipe was a simple whipped cream based frozen dessert. As I did more research, I discovered that the more popular variation lemon bisque is actually pretty common in older cookbooks. How did I never notice that "bisque" used to be a frozen dessert term too? Even if these women couldn't spell the names of the relatively sophisticated recipes they submitted, they still had something new to teach me.

I guess the real lesson from this little book is that we're all idiots in our own special ways. That seems about right.
Posted by Poppy Crocker at 7:42 AM