The case of the missing Maillard

Quick! It's the late '70s or early '80s, it's a blistering July day, you have no central air conditioning, but you want to serve your family some nice fresh bread! What do you do?

Well, if you have a new-fangled microwave, you might whip up some batter and microwave it, at least according to Betty Crocker's Microwave Cookbook (1981). You'll have yummy muffins for breakfast in no time:

A few simple ingredients, 2-3 minutes TOTAL baking time (with no hot oven!), a quick dip in some butter, then cinnamon-sugar.

Of course, they're microwaved, so... 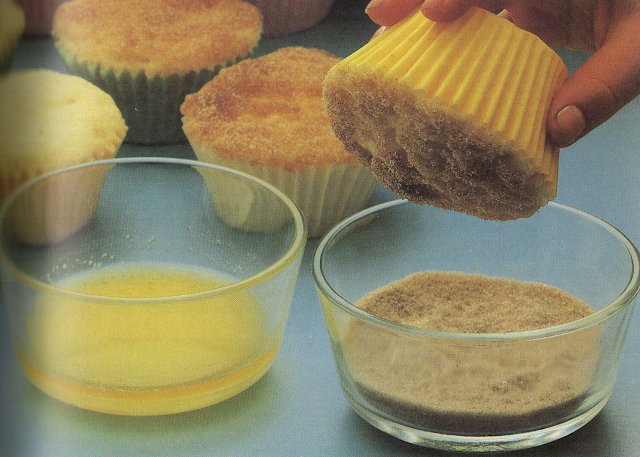 ...they will look like this. Flat, devoid of color until the cinnamon-sugar dip proves that it's at least as much of a visual choice as a taste-related one (to help cover up that missing Maillard reaction).

I might even have been a bit generous in calling them flat. Look at the one behind the muffin being dipped. 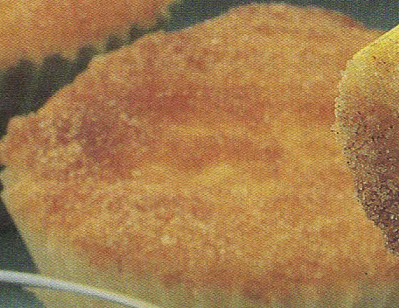 Is it actually concave? It's not a great sign if the baked goods collapse on their removal from the microwave. (Of course, the fact that they're being removed from the microwave in the first place is your first sign of trouble....)

If you're too lazy to even make your own batter, there is always the even easier (and more amusingly-named) option from the Tappan Microwave Cooking Guide (1979): 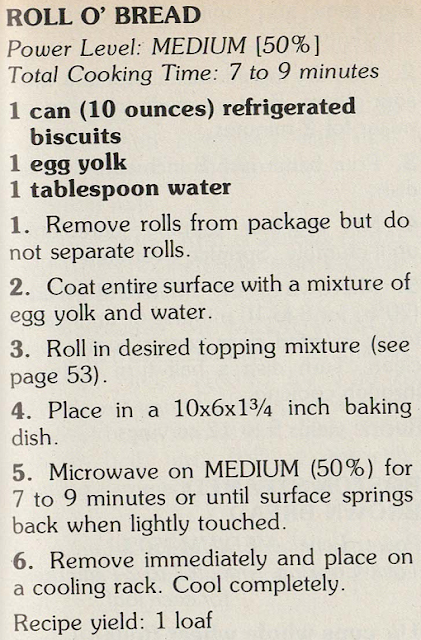 Make a Roll O' Bread by microwaving refrigerated biscuits. You don't even have to take them apart-- just leave 'em shaped like a can!

Even though Tappan doesn't think the undisguised canned-biscuit-dough shape is a problem, they too realize something has to be done to cover up the lack of browning, so the biscuits need an egg yolk wash and a quick roll in some toppings before hitting the microwave. 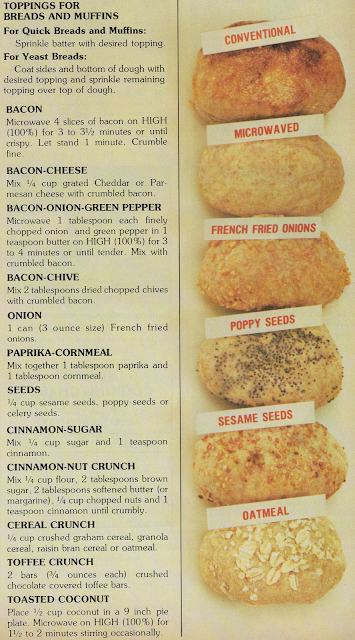 Tappan recognizes the shortcomings of microwave cooking right up front: look at the comparison between the conventional and the microwaved dough at the top of this chart. Part of me feels like they deserve some credit for being honest, and part of me feels like "If you knew it was a bad idea, why did you go ahead and suggest it anyway?" It's like my students who admit right in the essay that the source they're using is probably not very reliable, but they go ahead and use it anyway. Admitting that you're doing something shitty does not necessarily make it any less shitty. It just shows you're aware of being an asshole.

Rants aside, the toppings are varied and interesting enough that maybe they can kind of make up for the fact that you're eating a microwaved stick of refrigerated biscuit dough. Rolling that puppy in bacon and cheese or crushed toffee bars could make it a side dish to remember.

Whether you want to hear years of re-tellings of the night you ruined your favorite baking dish and made the whole house smell like burnt chocolate and chemicals by microwaving a can of biscuits and some crushed-up Skor bars is a separate question.
Posted by Poppy Crocker at 8:08 AM