It's almost August! August! That time of year when my childhood self knew the mornings of building yard clipping huts for My Little Ponies and dinosaurs were numbered, and there was no way a fresh box of fresh, pointy crayons was going to protect me from being made fun of when school started.... It's funny how close the feeling of impending doom still lies when I contemplate changing the calendar to August.

Here, the advent of August can only mean one thing: more menus from Glamour Magazine's New After Five Cookbook (Beverly Pepper, 1963). What glamorous menus could '60s couples expect as the summer heat reached its zenith and began to subside?

Well, a Tuesday might reinforce feelings of existential dread with this spread: 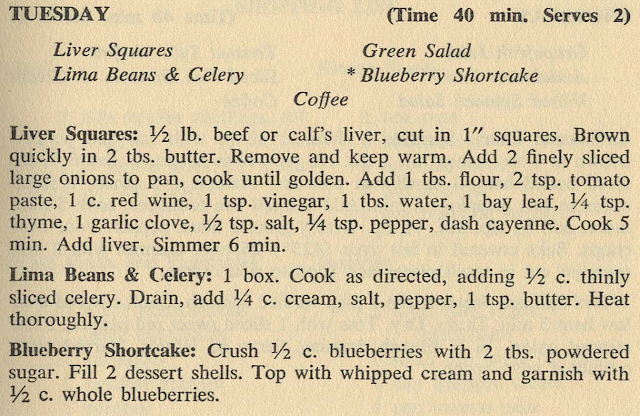 Liver Squares! Here, the liver and onions get a bit of an upgrade with tomato paste, red wine, and seasonings (but it's still liver and onions). The side combines limas-- the most stick-in-your-throat tasteless beans-- with celery-- the most stick-in-your-throat, tasteless veggie. Hopefully the cream will help. At least blueberry shortcake sounds genuinely all right, especially if you make sweet biscuit shortcakes instead settling for dessert shells.

Wednesday might initially seem to lighten the mood a bit: 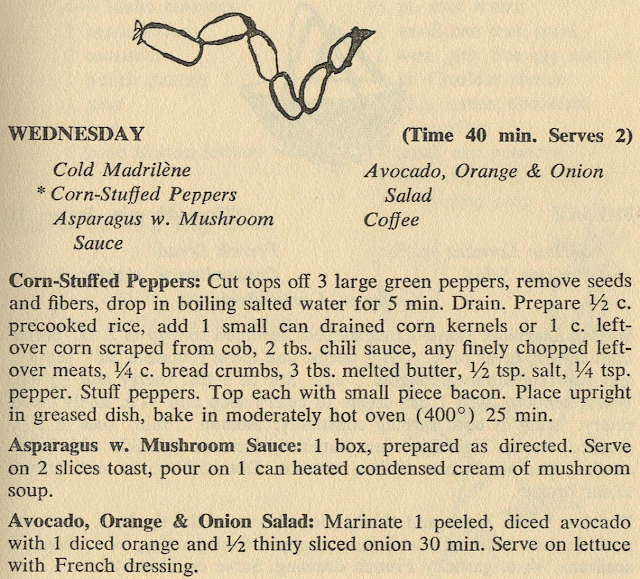 Corn-Stuffed Peppers! I was shocked to see a seasonally appropriate item. Fresh sweet peppers! Corn! (Yes, the recipe does suggest canned corn, but it also acknowledges you might actually have fresh corn to scrape right off the cob.) Of course, the side goes back to frozen asparagus served over toast with a can of cream of mushroom soup dumped over the whole lot, but how much can we expect? That side plus the thought of avocado, orange, and onion mixed with French dressing in place of dessert brings me right back down to liver squares with lima beans and celery territory.

Thursday is less a day of despair than one of confusion: 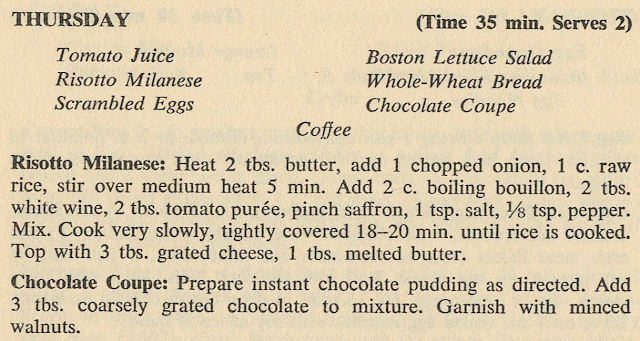 What kind of a menu is this? The tomato juice, scrambled eggs, and bread seem to suggest a breakfast-for-dinner theme. The "Risotto Milanese" seems to belong to an entirely separate menu. Besides, that, I had to use scare quotes to get myself to call this a risotto at all. The recipe looks more like one for a pilaf, since it seems to call for regular rice, the bouillon is added all at once rather than installments, and the rice is cooked covered, rather than being stirred. The cheese and butter are considered toppings, not stirred in at the end. To its credit, this version has wine and saffron, but Risotto Milanese it is not. The fancy-sounding Chocolate Coupe dessert is just instant chocolate pudding with grated chocolate and walnuts. (Despite all my grumbling, this is one menu I would gobble up without a second thought! It's incoherent and guilty of false advertising, but it all sounds pretty good to me.)

As the week winds down, the menu falls into a state of tedium: 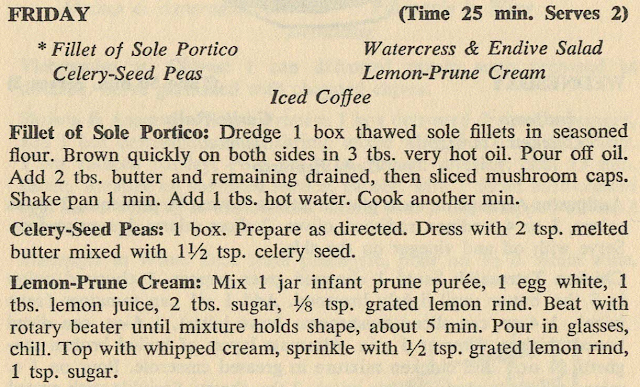 Fillet of Sole Portico is just a fancy name for fried sole with some mushrooms. The Celery-Seed Peas and Watercress & Endive Salad are exactly what they sound like. The only frisson of excitement is dessert: Lemon-Prune Cream. If you've ever wanted an excuse to whip a jar of baby food prunes into an egg white with lemon juice and sugar, this is your chance! (And if that is your idea of excitement, your hobbies are even sadder than mine...)

What have we learned for August?