Let's get medical! Today we have another community cookbook from a medical center, but this one is serious about its medical center status: 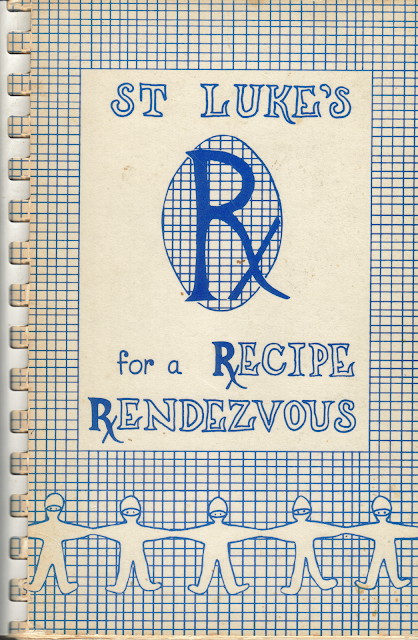 You can see right from the title that St. Luke's Rx for a Rxecipe Rxendezvous by the Women's Board and Junior Board of St. Luke's Hospital (Cleveland, OH; Sept. 1972) sees itself as the prescription for recipes! The line of people at the bottom of the page looks like a row of cut-out paper ninja to me, but I think they're meant to be medical professionals in surgical scrubs. Maybe the hospital has super-sneaky employees and they are actually ninja who are also prepared for surgery?

If you think the medical theme of the book is a cover-only thing, you are mistaken. There's a whole chapter called "Just What the Doctor Ordered: Low Calorie, Low Cholesterol." It actually contains no calorie counts, so I'm not sure what they consider low calorie. There are no cholesterol counts either, but judging from the recipes, I am not sure the editors would have wanted to include them. (And yes, I know we're not nearly so concerned about cholesterol now as heart patients were in the '70s, but I'm evaluating the book by the criteria of its time period.) Take "Eggs and Bean Sprouts," for example:

This recipe has six whole eggs to serve four people! Given that a single egg yolk has more than half a day's allowance for cholesterol, there is NO WAY this could possibly have been a low cholesterol recipe.

What has even more cholesterol than egg yolks? Just a page later, we find out: 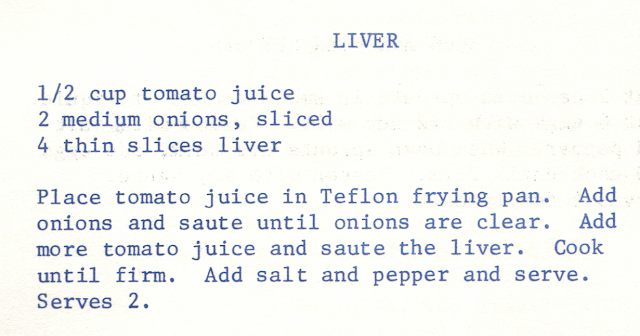 Yep. Liver is LOADED with cholesterol. I'm not sure what doctor was ordering these recipes, but that doctor was apparently not good with numbers. I'm almost surprised the recipe doesn't include instructions to coat the liver in egg  yolks and dredge it in seasoned flour first, maybe deep fry it in lard while we're at it.... That would be low cholesterol and low calorie, right?

Here is another case where the ideas about what is healthy don't quite line up to ours today. What drink might we sneak past the doctor if we're lucky? 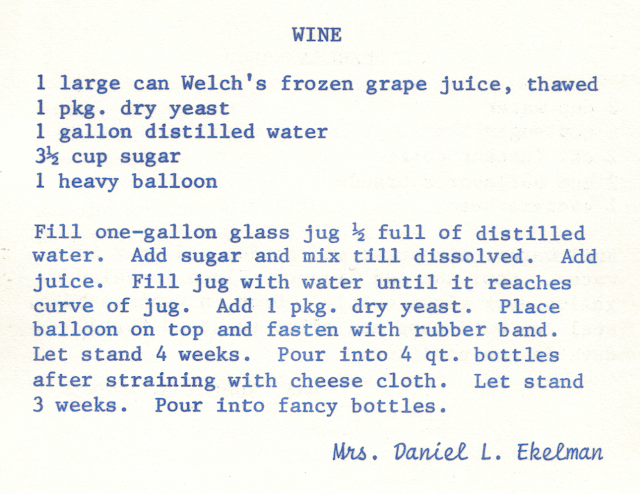 That's right-- wine-- friend to the heart today! I love any wine instructions that begin with a can of Welch's frozen grape juice, call for a "heavy balloon" to put on top of the fermenting jug, and end with pouring the result "into fancy bottles."

I'm not entirely sure I would trust St. Luke's for recipe advice, but looking at their cookbook is a prescription for fun.
Posted by Poppy Crocker at 10:16 AM