Things in jars and cakes with weird ingredients: Must be close to fair season!

We are getting close to fair season! I don't really go to fairs anymore, but when I was a kid I was in 4-H and I loved doing cooking projects in the hope that I would take them to the state fair. One year I took an egg project and decided to make a lemon sponge cake to take to judging. When I iced it, the icing would not stick to the cake or smooth down easily, so I plopped it all on top, buttered my hands, and used them to mash that sugary goodness onto the cake's top and sides. When I was done, I decided to decorate it (and distract from any imperfections) with sprinkles. I thought the container had a shaker top but didn't actually bother to check, so I dumped a pile of sprinkles on top. It seemed easier to make it look intentional than to try to take some off, so I used the better part of the bottle and had a very brightly colored cake! (That project did not go to the state fair for some reason...)

Everyone's projects went to the county fair, though, so I'd go to admire my 4-H club's booth and check out all the other exhibits. It's probably not much of a shock that even as a kid, I wanted to see what the grown-ups had cooked. I'd head to the cooking hall to shiver with disgust at all the unidentifiable things floating in glass jars and the weird mold patterns that can grow on slices of cake left in a glass display case in an un-air-conditioned building for a week.

That's the long way of saying that this week, in anticipation of upcoming fairs, we're looking at a few cards from the "County Fairs" section of McCall's Great American Recipe Card Collection (1973).

To represent the "unidentifiable things floating in glass jars" portion, here's a good way to get rid of excess summer crops that ripen just about fair time anyway: 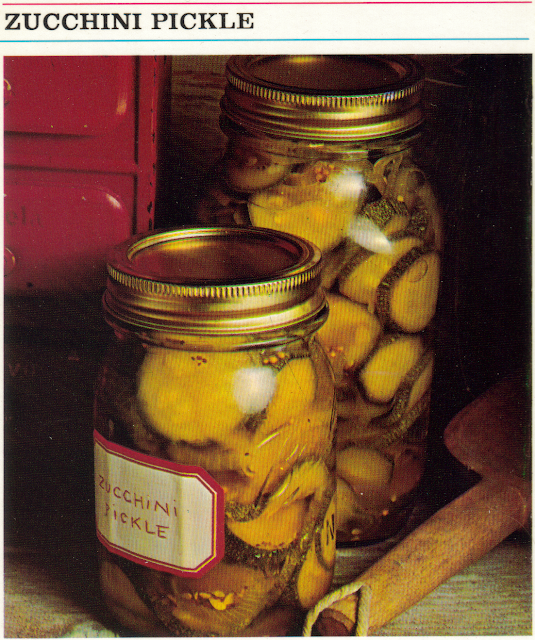 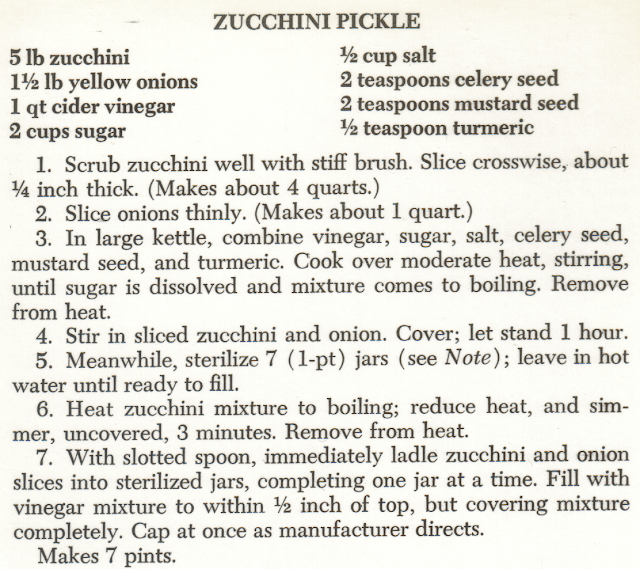 These seem like pretty standard pickles. I'm just pointing them out because they are a great way to "use" zucchinis without actually having to eat them. My grandma used to can and/or pickle so much stuff... and the good stuff did get eaten. Her home-canned peaches were sure to disappear by mid-winter, but if you checked her basement pantry, you could find rows and rows of the less desirable foods (Canned beets! Grayish "green" beans!). The dates written on them would gradually get older as you peeked into the back rows, often stretching back a decade or more. Those things were clearly never going to be eaten, but I guess grandma could feel good about them because she had been industrious and not wasted food because she canned it. I imagine these pickled zucchini in a neat but dusty row, waiting patiently as the other cans would disappear, year after year. They would secretly be the best zucchini because the best zucchini is the zucchini you do not feel obligated to eat.

For a classier take on canned things, McCall's offers this: 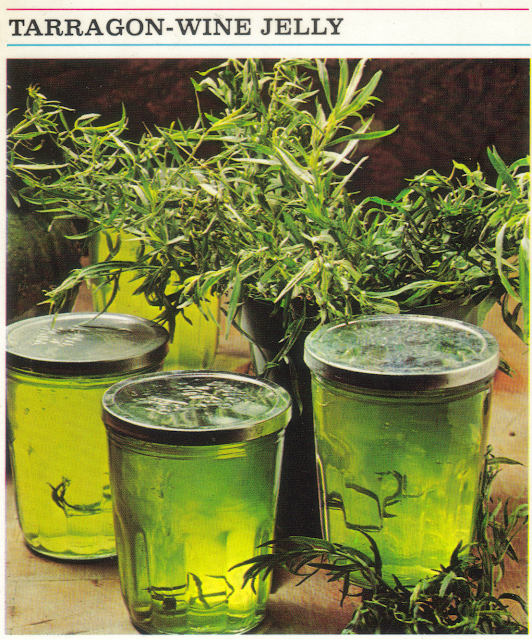 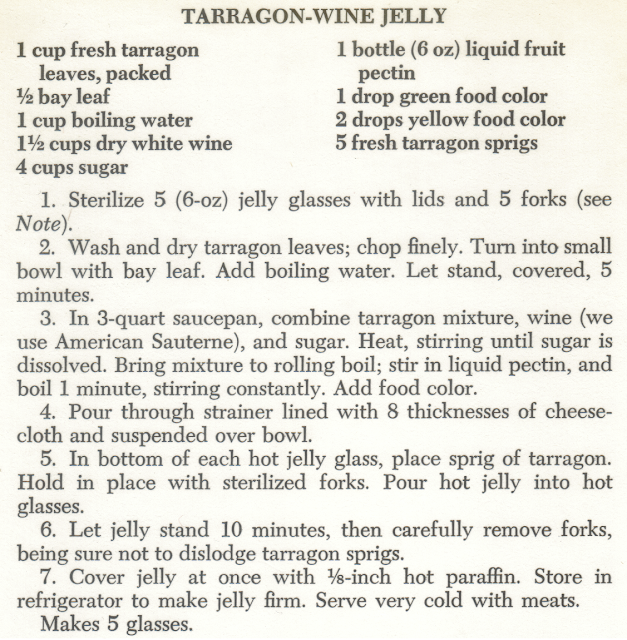 As a kid, I would have no conception of what "Tarragon-Wine Jelly" would taste like (and admittedly as an adult, I still don't have much of an idea), but I would have been mesmerized by the radioactive green glow. My grandma would never can something like this, but if she had, my cousins and I would definitely have stolen it to use as a toxic slime pit for our My Little Ponies to avoid.

To represent the treats that will be piles of mold spores by week's end, I picked a cake that also falls into the unlikely ingredient category: 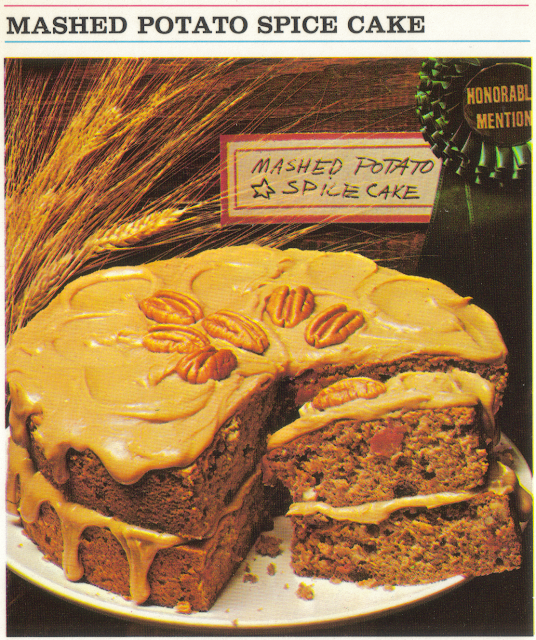 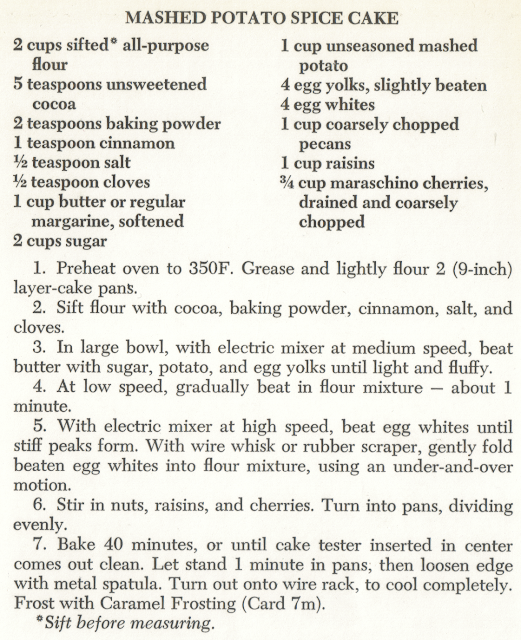 I'm not sure even the McCall's editors were convinced by this mish-mash of a cake loaded up with cocoa, cinnamon, cloves, mashed potatoes, pecans, raisins, and maraschino cherries since this only gets an honorable mention ribbon in the picture. It sounds more like something one would throw together for last-minute (and not particularly beloved) guests, but is probably no worse than the chocolate cakes featuring ketchup or sauerkraut as the secret ingredient at my old county fair.

This all makes me glad I'm not a fair cooking judge! Have a happy and non-judgmental weekend!
Posted by Poppy Crocker at 9:43 AM