Well, barbecue my bologna and jelly my pepper! It's July in Cincinnati

A new month means a new trip back to the glamorous world of late-ish-20th-century Cincinnati! Of course, the highlight of the entire summer in Cincinnati Celebrates: Cooking and Entertaining for All Seasons (Junior League of Cincinnati, first printing August, 1974, though mine is from the 1980 fifth printing) is "An Old Fashioned Fourth." 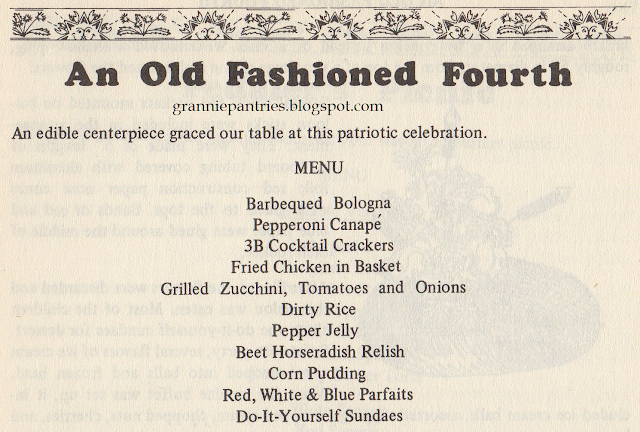 The edible centerpiece mentioned in the headnote, by the way, is a watermelon with some geraniums and daisies crammed into it. The flowers are supposed to be removed before serving, but it's still fun to think about the prospect of being expected to eat a cut watermelon that's been sitting in the heat with dirty flower stems crammed into it for half a day.
Of course, you need a fancy craft project to invite people to this nasty watermelon party. The kids should get involved, too, since they're off school and annoyingly underfoot. 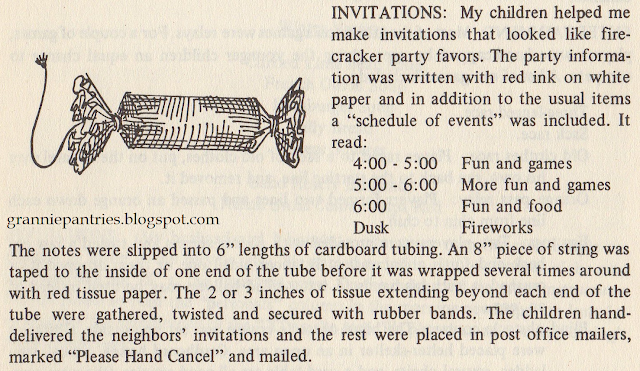 The firecracker invitations are so elaborate that they have to be hand-delivered by the kids (another way to get them out of the house!) or mailed in specialty mailers that must be hand-cancelled. I'm sure the post office workers in Cincinnati just loved the Junior League....
The menu partly consists of the types of quick-n-easy half-recipes that people still throw together when they're short on time. The Barbecued Bologna is just what it sounds like.

Slap barbecue sauce on bologna. Heat.
The Pepperoni Canapés require a bit more work, but not much.

Layer cheesy mayo and pepperoni on toast rounds. Broil. (And as is usual with "party" food, ruin all the good things with mayo.)
Other parts of the menu seem to expect way more effort than most hosts would make now. "3B Cocktail Crackers" is not a long-forgotten regional brand name. Cooks are supposed to personalize store-bought crackers with the three Bs of butter, basil, and brandy (plus savory, but I guess "3-B.S." didn't sound quite as good).

Now, the host would just pick up the fanciest Triscuit variety they could find (Balsamic Vinegar & Basil? Four Cheese and Herb? Cracked Pepper and Olive Oil?) the morning before the party.
And if you think the relishes to top those fancy crackers are supposed to be store-bought, you're mistaken. At least the Beet Horseradish Relish is pretty easy.

Mix canned beets with sour cream, horseradish, and salt. Chill.
The pepper jelly is more of a commitment. In fact, there are two varieties, so I'm not sure whether cooks were supposed to make just the green (because it was suitable for Triscuits, according to the recipe writer)...

...or to make only red, since it's the more patriotic color...

...or to make both, since holidays should be nothing but an unceasing series of tasks to show off just how much free time you have.
We've got no recipes for fried chicken (because cooks should have their own family recipes) or grilled veggies (because they're mostly decorative anyway-- Who's going to eat watery, half-raw and half-burned zucchini with this spread?). The dirty rice recipe has only 2/3 of the holy trinity (missing the bell pepper)... 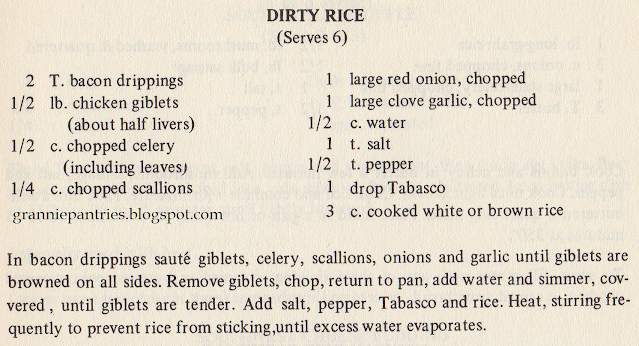 ...but it does have giblets and an entire drop of Tabasco sauce for seasoning, so I guess it's about as authentic as anyone has a right to expect Cincinnati dirty rice to be.
The Corn Pudding is that usual custard-y side that you make when the ears of corn at the farmer's market aren't yet quite at their best.

And there is zero indication, as far as I can tell, what the Red, White & Blue Parfaits might be. I'm going to assume they're layers of cherry pie filling, Cool Whip, and blueberry pie filling, just because I can. Besides, they're pretty easy to throw together when you've got to craft a do-it-yourself sundae bar too! I could be wrong, though, so feel free to imagine your own late-'70s/ early-'80s-appropriate combo. (Bonus points if you can incorporate Jell-O 123!)
I'm exhausted just thinking about making this much food and then having to deal with all the guests. Maybe Cincinnati hosts secretly felt the same way too, though. It might explain why they ended the feast with slices of warm and dirty watermelon. ("She's brandishing that awful melon at us, dear! I guess it's time to leave...")
Posted by Poppy Crocker at 9:15 AM