This week is probably a bit of a let-down, coming off of a nice, long weekend and plopping back into the routine of another work week for a while until the mad rush of the holidays. That's why I'm spicing it up with a bit of celebrity excitement: 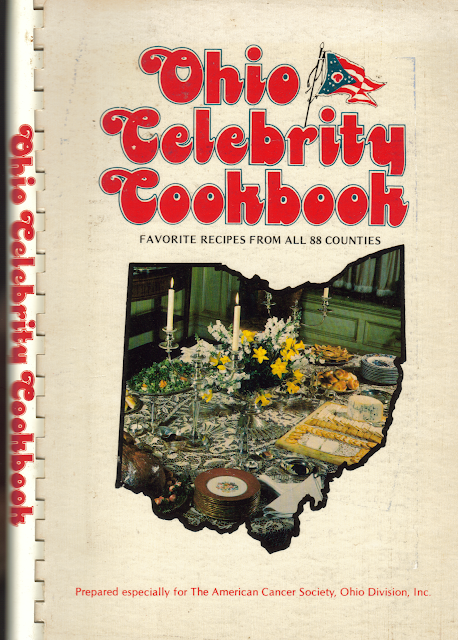 They did not skimp on celebrities, either, as there are celebrities from all 88 Ohio counties! I didn't know there were so many celebrities in Ohio, much less that they were so equitably distributed by county, but I hope you don't mind my ignorance. (You should be used to it by now!)

To make up for the immediate put-down, I will concede that Ohio celebrities really know how to do up some proper pigs in a blanket: 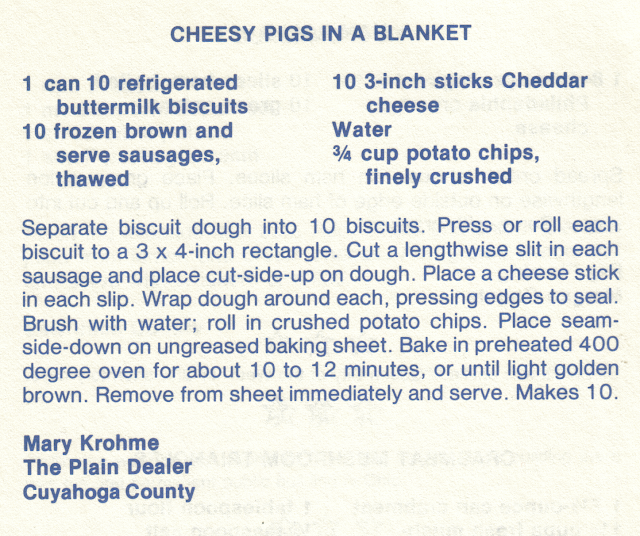 These pigs in blankets are not just sausages cozily wrapped in biscuit blankets, but also filled with cheese and coated with crushed potato chips! The only way to make this any more stick-to-your-ribs- and-every-other-inch-of-your-body Midwestern would be to thin down a can of cream of mushroom soup with a bit of milk and serve it on the side as a gravy/ dipping sauce. (As for our "celebrity," apparently working at the newspaper is enough to make Mary Krohme qualify.)

Wrapping things in other things is a big trend in this cookbook. Another recipe I loved: 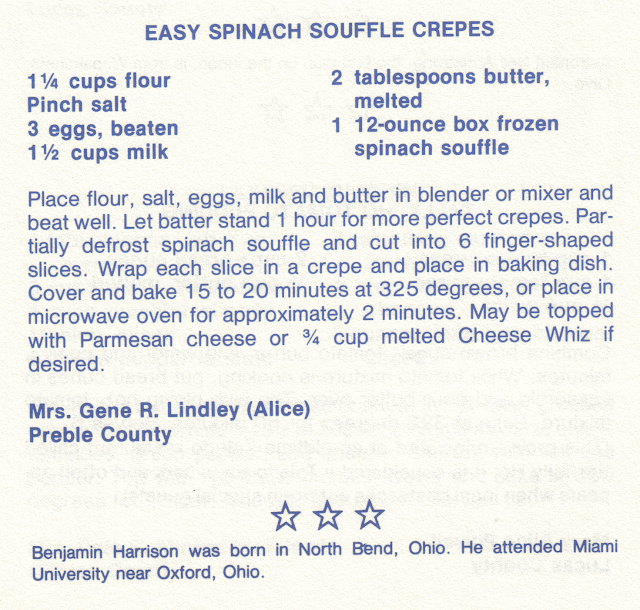 Easy Spinach Souffle Crepes ask cooks to partially defrost a frozen spinach souffle and "cut into 6-finger-shaped slices" to serve as crepe filling. I love the mix of actual cooking (make your own crepes-- with no explanation of how to make them other than to mix up the batter in a blender and then let it stand for an hour! The batter has magically transformed into crepes once the souffle gets chopped up) and assembling of pre-made parts (frozen souffle filling and melted Cheese Whiz topping). Mrs. Gene R. Lindley's celebrity has escaped me (Google found a father of a soccer star Gene Lindley and a Florida sex offender Gene Lindley, but I doubt either is the Preble County "celebrity"), but her practicality comes through.

Bonus Ohio fact: The Miami in Florida and the Oxford in England are both way more popular than the ones in Ohio.

Nothing quite captures the excitement of life in '70s Ohio like this photo of the Preble County Pork Festival, though: 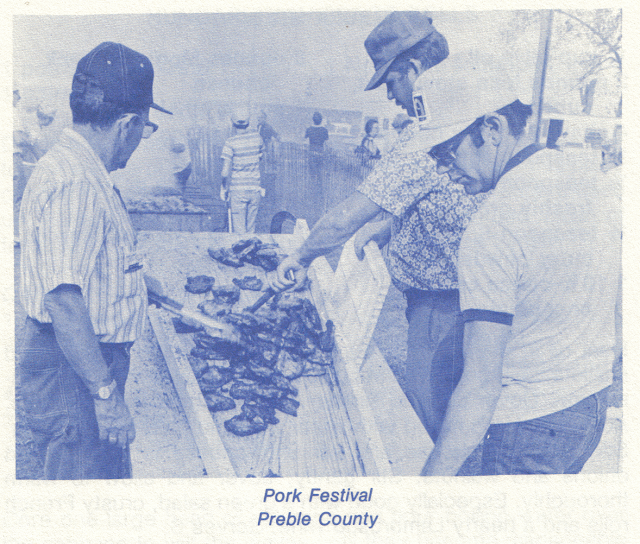 Paunchy middle-aged men in baseball caps looking away from the camera at what is, presumably, a pile of pork. Woo-hoo!

Ohioans don't just serve pork as chops, though. I'll leave you with this most interesting preparation: 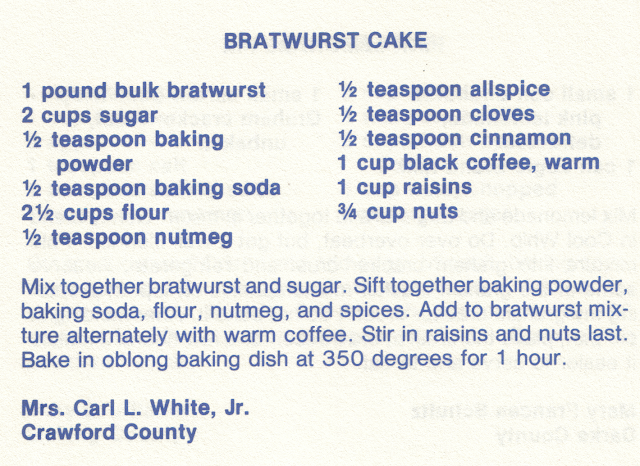 If you want a cake with typical fall spices, raisins, nuts, coffee, and a pound of bulk bratwurst, Mrs. Carl L. White, Jr. (Google was no help on this "celebrity" status!) has got you covered.

Happy Wednesday! May yours be at least as exciting as the Preble County Pork Festival.
Posted by Poppy Crocker at 8:37 AM