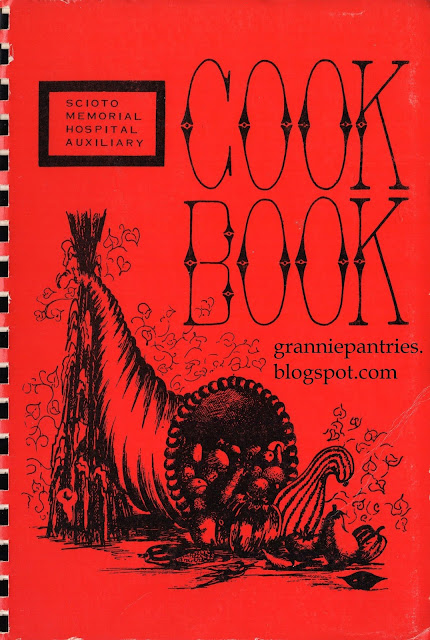 The cornucopia on the cover of the Scioto Memorial Hospital Auxiliary Cook Book (1972) might lead you to believe that the recipes are brimming with abundant fruits and vegetables. The crookneck squash is looking down in embarrassment for you if you're thinking that. The Scioto Memorial Hospital Auxiliary fundraisers often seem heartily sick of cooking and like recipes of the five-ingredients-or-fewer (and mostly canned) variety.

Do you, like Ed Gein, like apple pie with cheese on it? Well, that's a lot of work.

How about some canned applesauce with sharp cheddar shredded into it? You can put it on a Ritz cracker and pretend that's the crust.

Do you enjoy the complex, sweet/ tangy/ smoky (and/ or whatever else, depending on your allegiances) flavors of barbecued meat? Again, making the perfect sauce and cooking the meat just right take a lot of work.

How about some diced leftover roast reheated in a can of vegetable soup? The auxiliary will call it barbeque and there's nothing you can legally do to stop them!

Sometimes when they make casseroles, the auxiliary members will go all out and get three ingredients instead of two.

If you think they'll spring for noodles in their salmon casserole, you don't know them. It's canned salmon and mushroom soup plus 25-cents-worth of potato chips. (The noodles would have had to have been cooked separately, after all. That's a lot of work.)

While the auxiliary was fully on board with marshmallow salads, they didn't always want the extra step of making Jell-O to encase the whole thing.

Canned pears, marshmallows, and whipped cream were plenty for a salad. (Plus, no suspense over whether it would actually come out of the mold in one piece!)

The thought of marshmallows in salads was sometimes enough to push the auxiliary to the extravagance of a recipe calling for more than five ingredients, though.

Yes, they could go all the way up to six ingredients if it meant throwing marshmallows, pineapple, and coconut into the cole slaw!

In short, the worst-case scenario in this cookbook is spending a little time on marginally edible foodstuffs and having to eat them. The best-case scenario is finding a low-effort way to convince the family to eat out more often.
Posted by Poppy Crocker at 12:00 AM