The military wives love olives in EVERYTHING

I knew I was in for some excitement from Recipes on Parade: Salads Including Appetizers (Military Officers' Wives Clubs, 1966) because it has two full chapters of gelatin-based salads, plus most of the other chapters have additional sections reserved for molded salads. 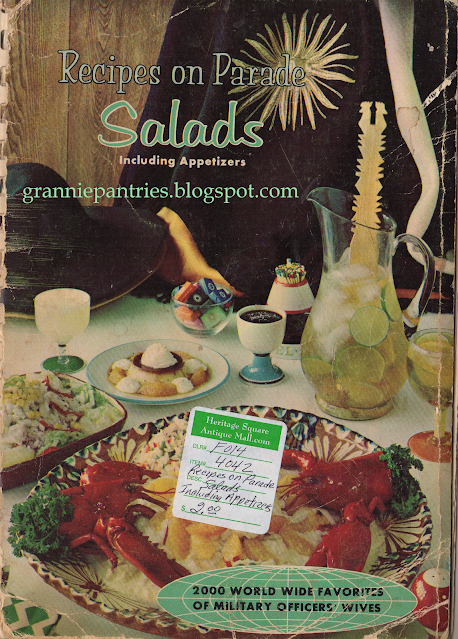 You'd never know it from the cover, though, which suggests the book is mostly about half-lobsters trying to eat orange segments next to a pile of confetti rice, as the citrus punch looks on, impassively.
This book suggests putting just about everything into gelatin salads-- even things that I don't think I've seen in Jell-O salads before, like Grape Nuts. 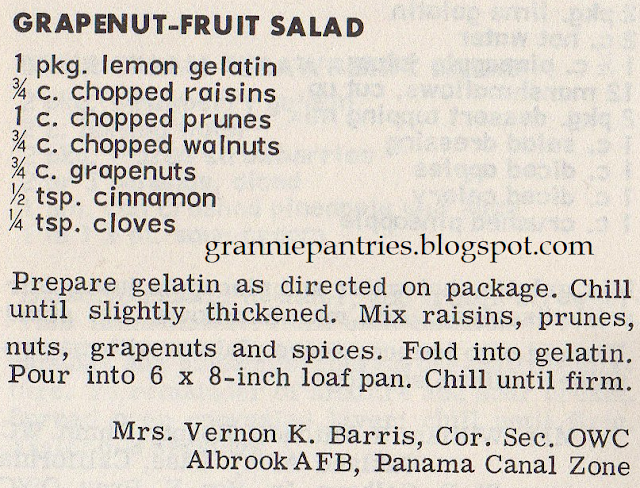 I wonder if being soaked in gelatin would take away that "Guess what! You're trying to eat kitty litter!" texture of Grape Nuts that I find soooo delightful.
If you want the additions to stay crunchy, the book recommends throwing water chestnuts into your fruity gelatin salad. 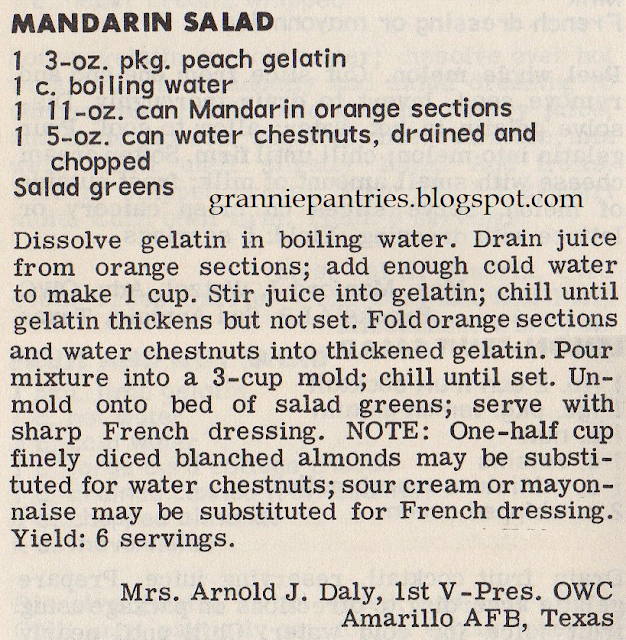 Sure, the book includes some old favorites, like the usually fine-sounding (and desserty) Under the Sea Salad, but the cooks often put their own spin on things. 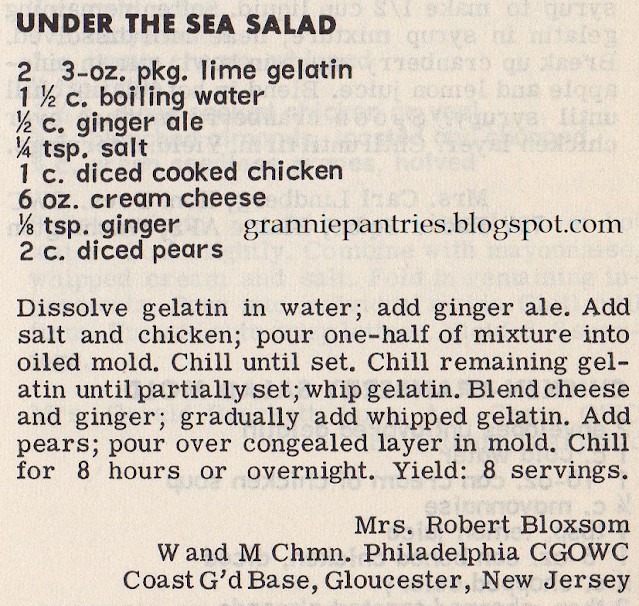 I mean, everybody wants chunks of chicken in their pear-and-lime cheesecake-like confection, right?
And while other cookbooks offered inexpensive substitutes for crown roast, this book was the only one I've seen so far that constructed one out of gelatin. 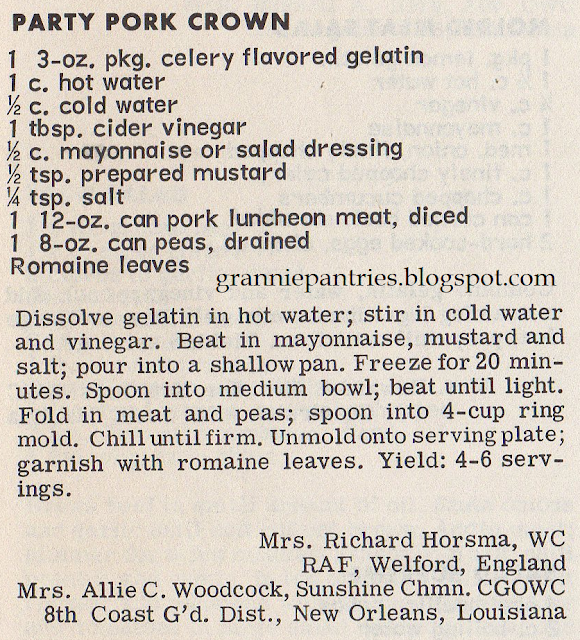 And yes, celery-flavored Jell-O was a thing in the '60s. It's up to you to decide whether that fact is more horrifying than the idea of trying to pass off a load of condiments, a can of diced luncheon meat, and a can of peas suspended in a ring of said gelatin as a "Party Pork Crown."
And while this book did occasionally admit the "salads" were sweet enough to serve as desserts, the ones designated as desserts weren't always even that sweet. Yes, this one does have pineapple and a bit of sugar, but... 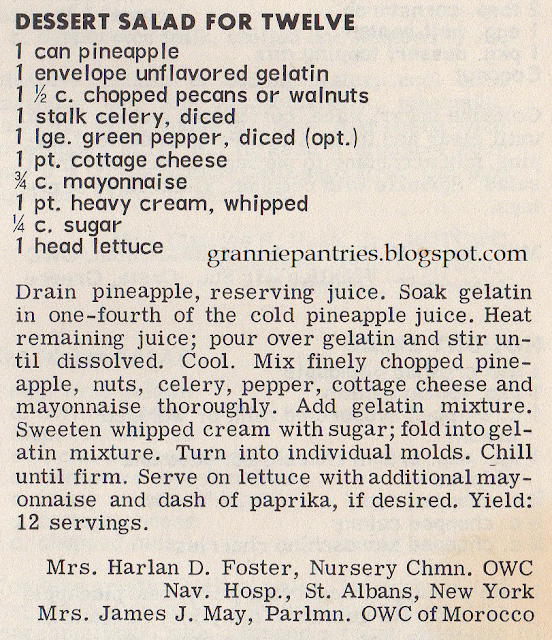 ...it's also made with unflavored gelatin, rather than the lemon or lime we might expect with pineapple. Plus, it's loaded up with celery, green pepper, and mayonnaise and served on lettuce! None of those features are particularly desserty (and of course, this flies in the face of the served on lettuce = salad rule).
The one constant is that the recipe contributors seem to think olives belong in pretty much every type of gelatin salad.
They belong with black cherries. 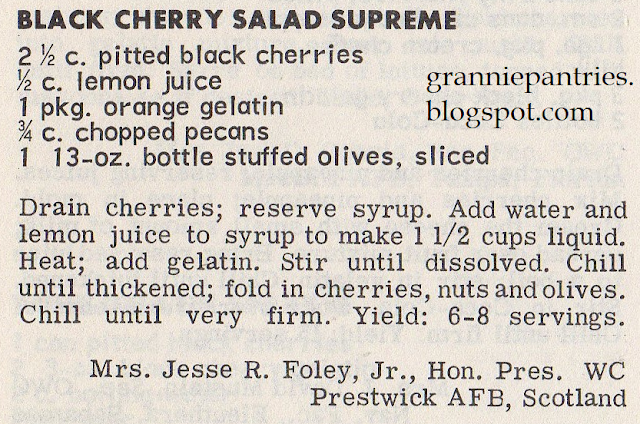 They belong with mandarin oranges. 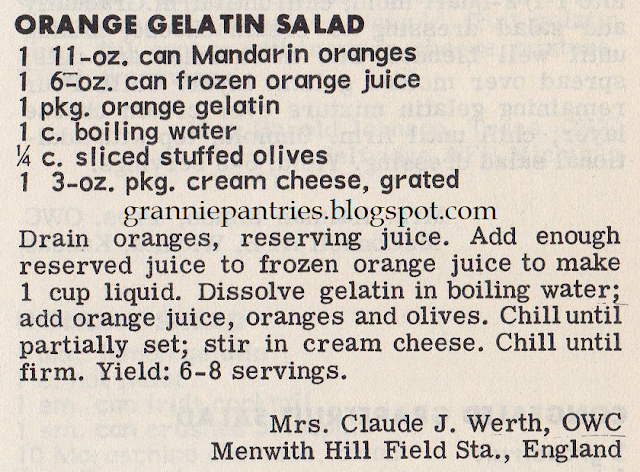 They belong with grapefruit and lime. 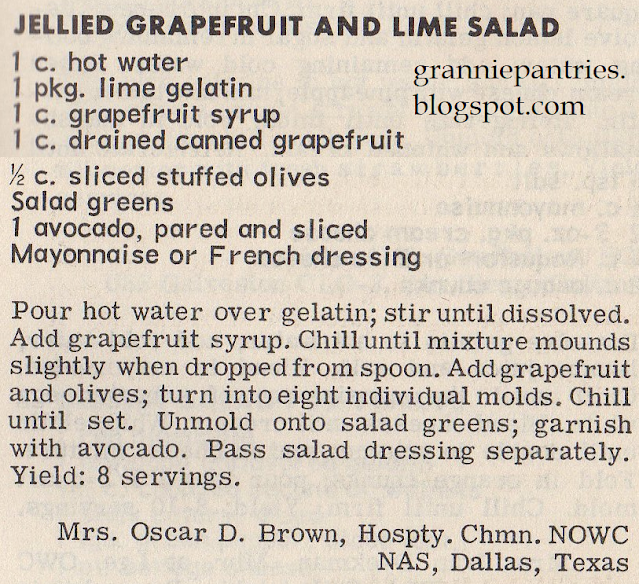 They go with lime, crushed pineapple, and cottage and cream cheeses, too. 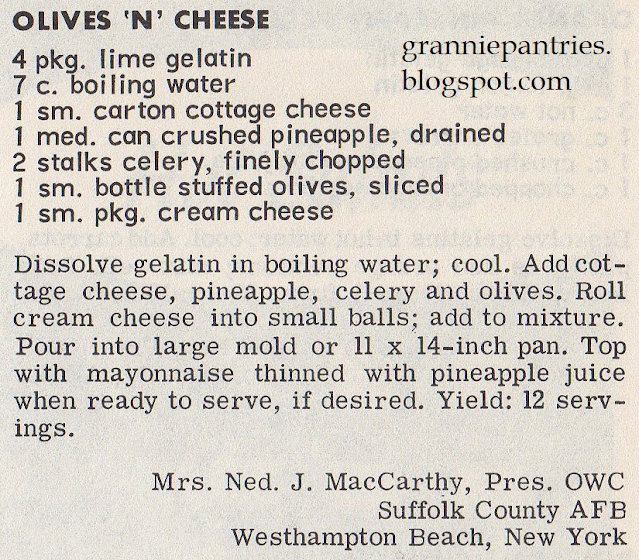 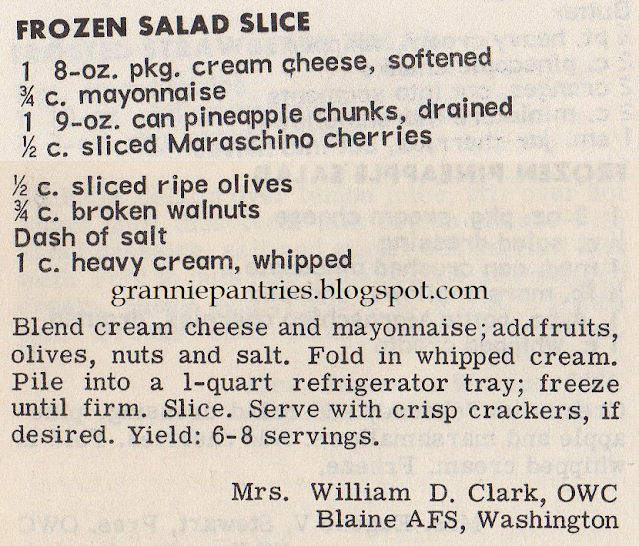 I'm sure a mouthful of frozen olives and Maraschino cherries will be among the more memorable bites in one's life...
The book isn't entirely Jell-O salads, though. There's a no-gelatin version of a pineapple-and-cheese salad. 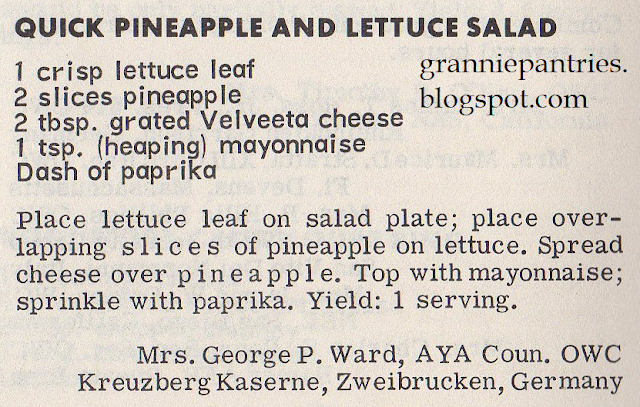 Velveeta is so soft that I have trouble imagining grating it, unless maybe it's frozen first. I guess if your best idea for Velveeta is to put cold lumps of it on mayonnaise-topped pineapple slices, though, well, you don't really understand that it's best used for melting...
There's Tuna-Fruit Salad. Adding olives might not seem like such a terrible idea for a tuna salad, if you're into tuna salad... 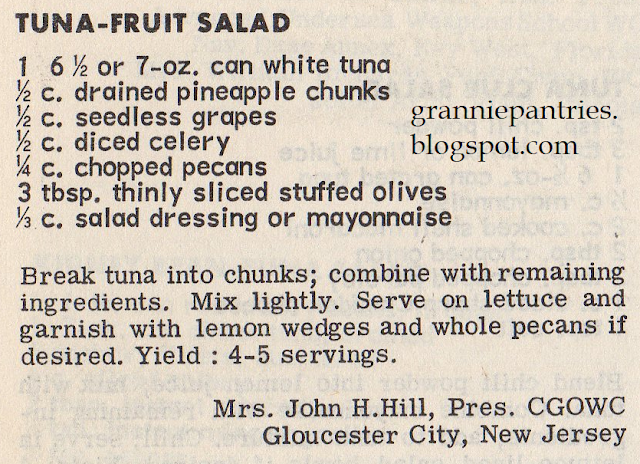 ...until you remember that this is tuna fruit salad, so those olives are trying to blend with pineapple and grapes along with the tuna. I kind of want Iron Chef Alex Guarnaschelli to show up and insist that the contributors to this cookbook learn to edit.
The fact that some of the recipes double as craft projects is sometimes enough to save them. The Bird of Paradise sounds like it might be pretty terrible, mixing chicken, hard-cooked eggs, and pickles with pineapple, Maraschino cherries, and apple. 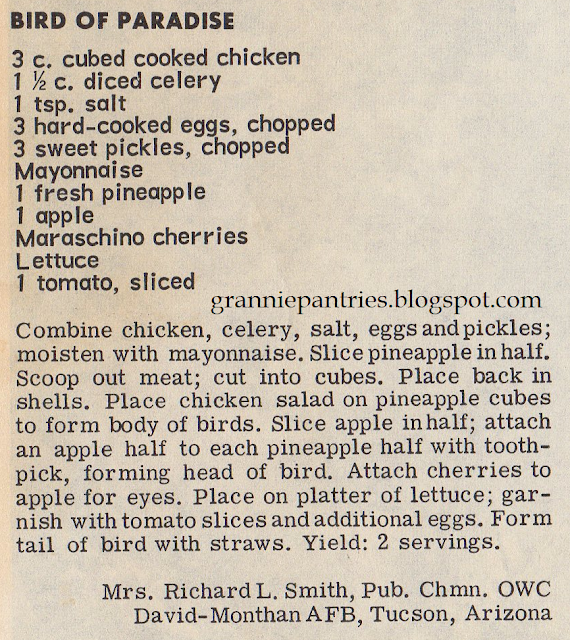 The components aren't all mixed up, though. The pineapple halves are essentially turned into bird bodies that are stuffed with a pretty normal-sounding chicken salad. The apple and cherries just get turned into the pineapple bird's head, so the stuff that doesn't go together can easily be eaten separately.
And some recipes are just weird, like the String Bean Supreme. 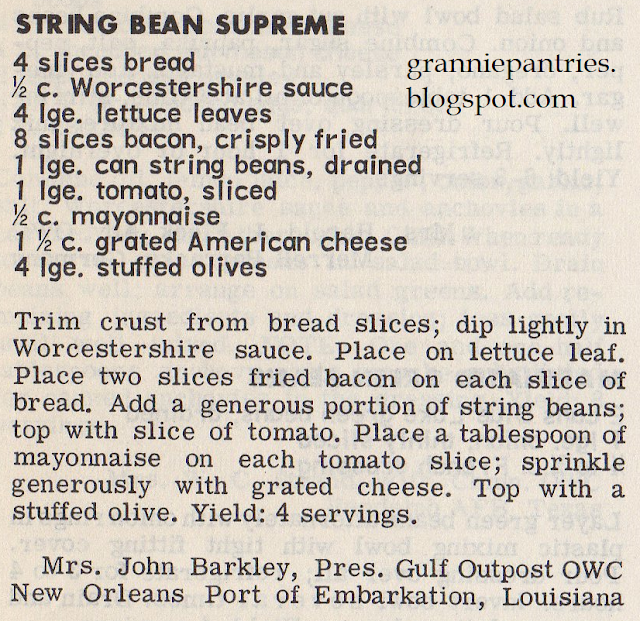 It's the only salad I can remember seeing that builds a salad on top of Worcestershire-dipped bread slices. That sounds damp and unpleasantly strongly flavored, perhaps to offset the canned flavor of the string beans? Who knows? At least the olive topper isn't joined by a Maraschino cherry.
Sooo.... yeah. That's my overlong way of saying that this book is definitely worthwhile if you love all varieties of odd, inexplicable, and clashing salad mixtures! It's the perfect chilly companion for early-ish August when the weather is still hot but a vague sense of nausea sets in over the prospect of starting a new, probably chaotic school year.
Posted by Poppy Crocker at 9:05 AM