In which your humble writer accidentally weaponizes a spoon

It's that time of year again-- time for me to actually cook something vintage. That's right: Pieathalon! 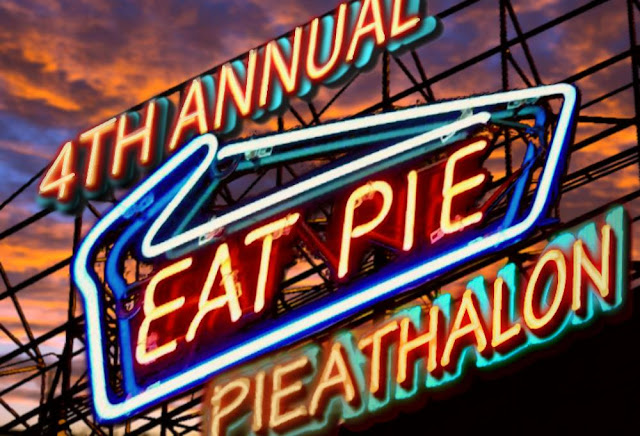 I sent in a recipe for Waffle Pie from Who'll Do the Dishes (1960) and waited to see what would come in for me. I got my recipe from the always-entertaining Yinzerella at Dinner Is Served.

This recipe is from Anne Marshall's Australian Cooking for Today (1973). If you're having trouble reading the recipe, here are the directions:

Dissolve 2 tablespoons sugar in a heavy pan and allow to caramelize to a pale golden brown. Remove from heat and pour on 3 tablespoons of boiling water, very slowly. Return to heat, simmer to dissolve caramel, add the milk and stir.

Beat the egg and yolk with 1 tablespoon sugar, add caramel-milk and strain back into the saucepan. Cook very gently until the custard coats the back of a spoon. Pour into a bowl and allow to cool. When it is cold, transfer custard to a freezer tray and freeze till mushy in the freezer. Beat well, and fold in the cream. Return to the tray and freeze until firm.

Melt the chocolate in a bowl over hot water and dip the edges of the pies into soft chocolate.

To serve, pile ice cream into the pastry shells, and spoon honey sauce and walnuts over.

Here are all the filling ingredients. It's a pretty simple list: 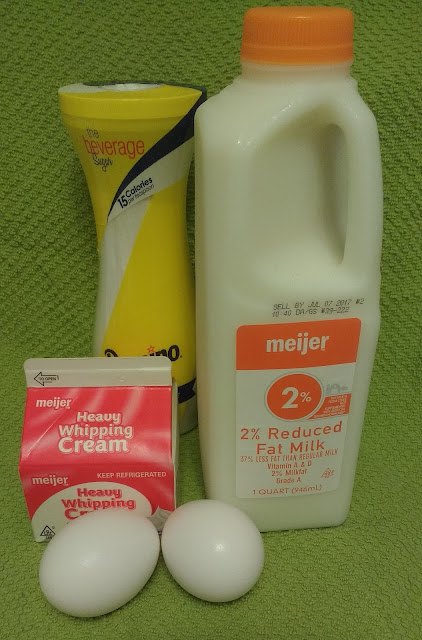 I had to look up caster sugar, and apparently it's the same thing as superfine sugar, so I picked that up.

The first step was to caramelize the sugar. I wasn't sure about that, so I looked up a tutorial and saw that I should put the sugar in an even layer in a heavy pan, put the pan over medium heat, and watch for it to look like there was some water in the pan. I felt dumb staring at a pan of sugar, but then suddenly I saw "water" (melted sugar) at the edges and I started stirring like crazy. It started turning colors very quickly after that point and it was fully caramelized in maybe a minute. I stirred in the water while steamed and stuck to my spatula, but the caramel melted into the water once I set it back on the heat. I kept worrying that I had screwed something up, but it seemed to be working fine.

Then I followed the directions to add the milk and eggs and cook to make a custard. Here's what it looked like before I set it in the freezer to get "mushy." 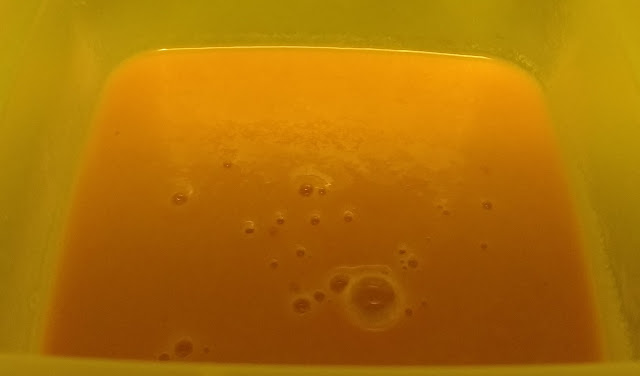 Then I whipped the cream, folded it into the re-beaten custard, and put it all in the freezer to get solid.

I realized at this point that the recipe called for four tablespoons of sugar in the filling, but I had only used three: two for the caramel and one beaten into the egg and yolk. Did I miss something somewhere? Oh, well. This was made with three tablespoons of sugar, not four.

Then I worked some flour, butter, and sugar into a crust. I'm not going to lie: the recipe is hard af to work with. When it's cold, it's brittle and crumbly. When it warms up, it sticks to everything.

I had bought pot-pie-sized disposable tart pans, but I realized they were waaay too big. Then I remembered that I had two mini tart pans, so I ended up pulling those out and saving the other two balls of tart crust dough for later (if I ever get that ambitious). I managed to half-roll, half-pat the remaining two crust balls into barely-passable tart shells and bake them off. 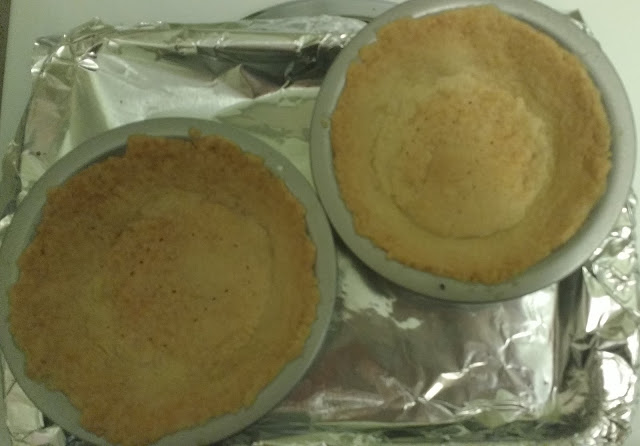 There was obviously no way I could dip the shell edges into anything, so I messily painted them up with melted chocolate:

Go ahead and put them on a Pinterest fails board somewhere. I don't care.

So I finally assembled a crust with the caramel filling. Well, more accurately, I tried to assemble it. That filling was rock-hard. I left it on the counter for 15 minutes to soften, and it was still solid except at the edges, which were getting runny. I tried scooping it with an ice cream scoop, but it seemed too blunt. I tried scooping it with a serving spoon, but I managed to slip and slice my thumb open. Once I got bandaged up, I finally got a few scoops of filling into one of the shells and threw on a few walnuts. (Left off the honey since I'm not a big fan.) Then I brought in my special guest to look the pie over: 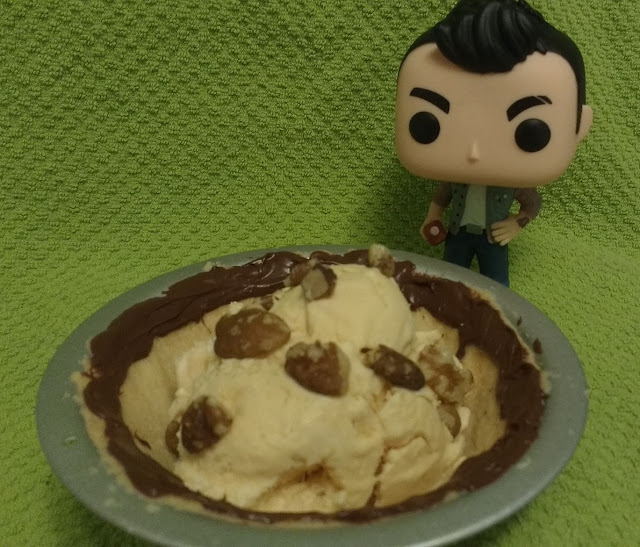 I'm not entirely sure how I was lucky enough to talk Cassidy from Preacher into showing up, but I think a big part of it was the case of single malt I promised him. He was... uh... not very enthusiastic about the pie.

"Actually, I'm more interested in your thumb. Gimme a look at it." 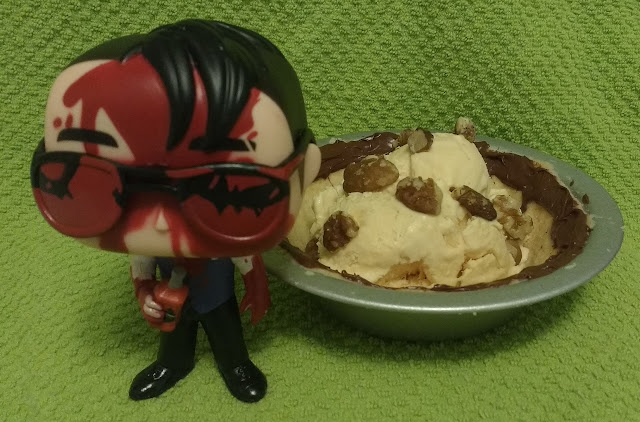 Cassidy wasn't much help, so I tried the pie. How is it? It's mostly cream and sugar, so it would be hard to go too wrong.

I took a taste and it's fine. Dairy fat, caramelized sugar... there was no way I was going to hate it. If I'm being honest, though, I'd much rather get those kinds of calories from a slice of cheesecake or some Ben and Jerry's. The texture of the filling is icy and crumbly. It keeps breaking into weird little slivers that immediately melt. The flavor is pretty flat too. This would probably be better off if it weren't frozen and were just a traditional custard pie. It also needs some more flavors to balance it out-- definitely a little salt, maybe some more chocolate for a little more bitter. Pecans would be a way better choice for nuts than the walnuts. At least it didn't end up as soup like last year's pie. (If you're interested, here are the links for year 1 and year 2 too.)

A big thanks to Yinzerella of Dinner Is Served for organizing the Pieathalon! Be sure to visit the other entries. (They will be going live throughout the day, so if a link doesn't work now, try it later.)

Posted by Poppy Crocker at 9:51 AM