In which your humble writer makes the wrong choice

Yes, it's the long-awaited day! Pieathalon! 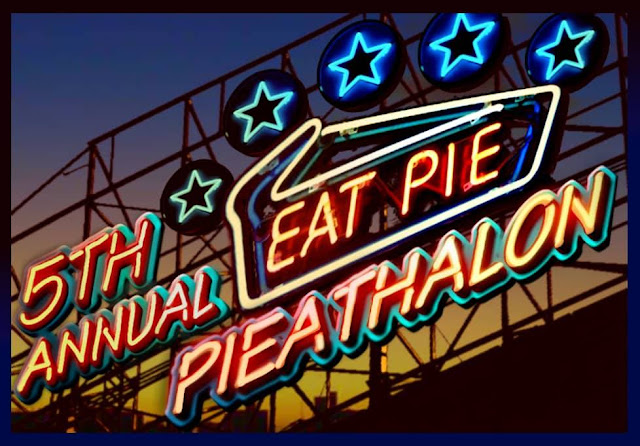 My recipes are from the nicest entrant ever. Bobb of Dr. Bobb's Kitschen is so awesome because he sent me two recipes (Yeah-- the plural in the previous sentence wasn't a mistake!) so I could pick my favorite.

One contender was Strawberry Ginger Pie from Good Looking Cooking: A Guide to the Use of Unflavored Gelatin for Students (1957). 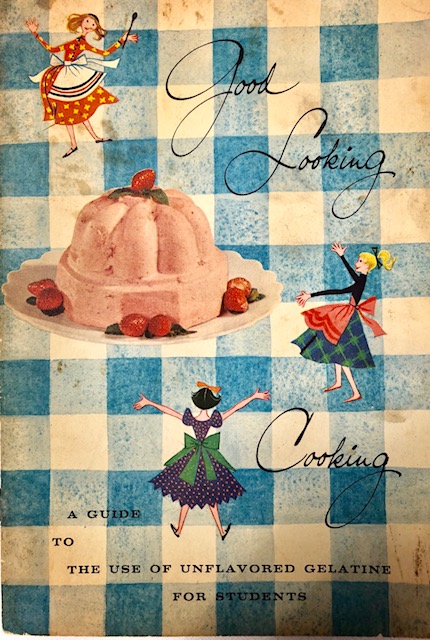 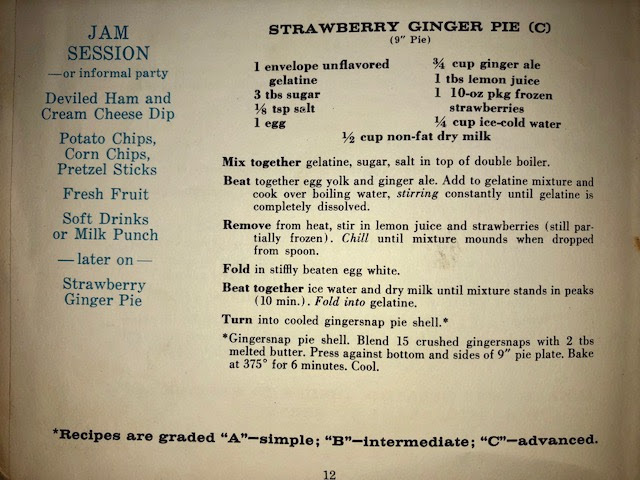 The other was Lime Pie with Crême de Menthe from Thomas Mario's The Midnight Cookbook (1971), though Bobb suggested the alternate title might be The Swinger's Cookbook. 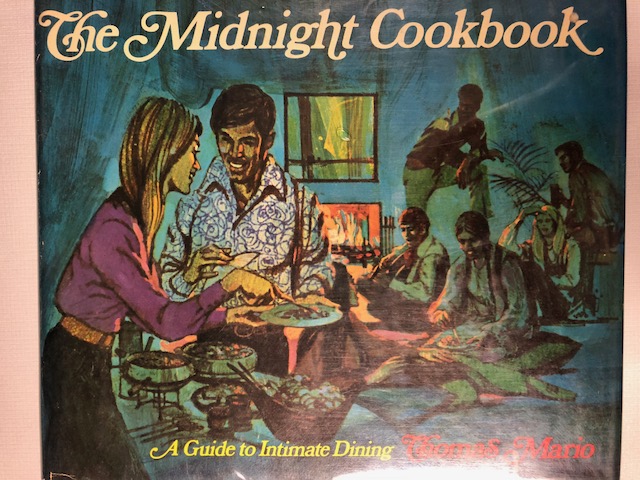 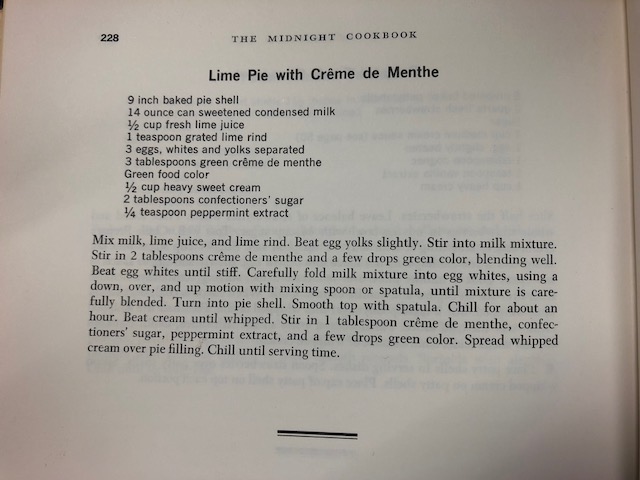 I bet you can guess my pick based on the assembled ingredients: 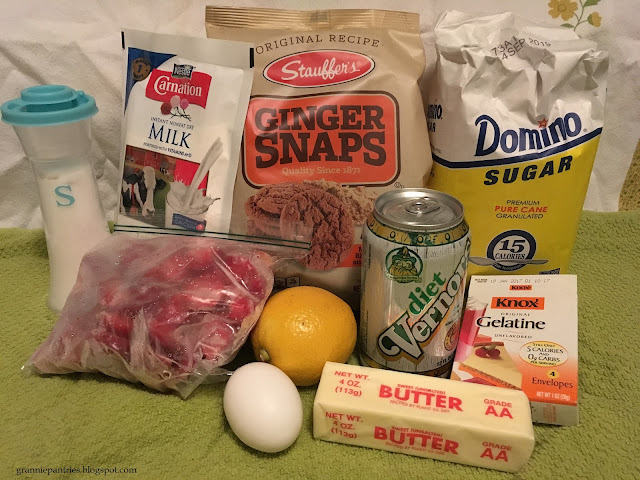 Don't look too closely at the expiration date on the gelatin, or you might realize that I've been working my way through that box for years now. I only get it out at Pieathalon time, and this year I used up the last packet!

First I made the gingersnap pie crust, but the 15 gingersnaps the recipe specified barely covered the bottom of my pie plate. I crushed up an extra five and threw in a little extra butter, and that was enough to get the sides of the pan mostly coated. At least the butter-to-gingersnap proportion was good with this recipe, so I didn't end up with a butter-and-gingersnap swamp like I did in Pieathalon 1.

The gelatin mixture was pretty easy to make, even though I had to improvise a double boiler yet again. I will say that mixing an egg yolk into 3/4 cup of ginger ale seemed like a very weird thing to do, though.

The recipe said the powdered milk and water mixture would take 10 minutes to whip into peaks, so I started whipping it before I started on the egg white. Once the egg white was whipped, I checked the milk mixture and it was just barely fluffy. I thought maybe it wasn't cold enough and stacked bags of frozen veggies around the bowl as my mixer continued to whip, thinking maybe it needed to be colder to thicken. Folded the egg white into the gelatin and let the mixer go a few more minutes. Still no peaks on the milk, even though it had been whipping 20 minutes by that point. The rest of the filling would set up without the milk-whip if I didn't get it in there soon, so I just added it in its slightly-fluffy state. There was still plenty of filling for the crust, so I guess the under-inflated milk didn't matter.

Then the whole thing went into the fridge to chill and await my special guest taster. 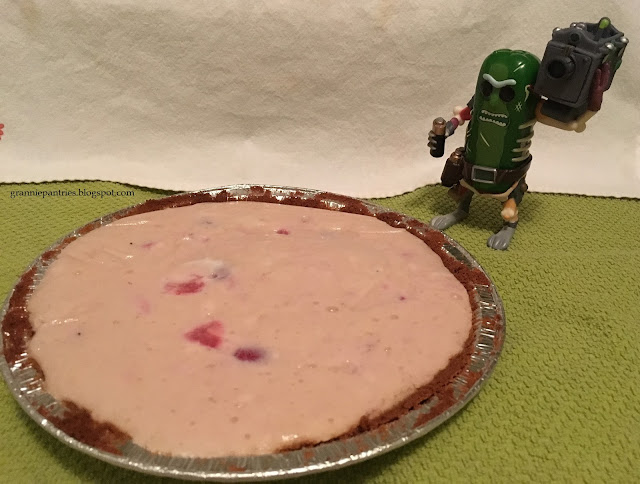 "Wait a minute! This pie is p...urp... pink! I thought it would be green! I only came because I thought I was going to get something with booze! Why didn't you pick the one with booze?"

"Well, that one did sound more interesting, but I don't like going to the liquor store and I didn't want to spend much because I usually throw out most of the pie anyway."

"Ugh. Fine." Pickle Rick rolled his eyes and mimed throwing a grenade into the pie, but he just sliced it with his laser instead.

Ready to dig in? 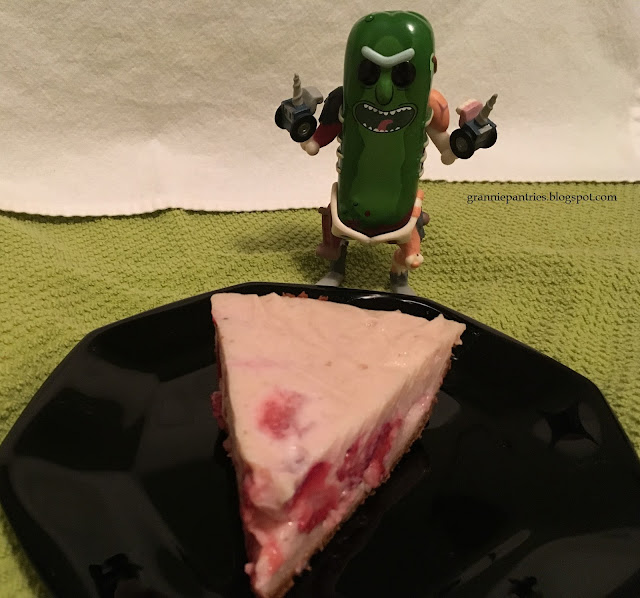 He took a bite. "What is this? From a dimension that doesn't believe in flavor? I can taste strawberry when I get a bite with one, and the crust tastes like gingersnaps, but that pink crap does n...urp... nothing. You could eat a bowl of strawberries with a couple gingersnaps on the side and get just as much flavor for zero effort. Zero effort, Poppy! You must have too much free time on your hands."

"Well, I suppose it was a good way for families to stretch..." I started, but Pickle Rick cut me off.

"You might have time to kill, but I don't. I gotta get back to weaponizing office supplies and making up catch phrases."

With that, he was gone. I took a taste, and he was pretty much right. The pie tastes... fine. It's not terrible, but it has little to recommend it either. It's just kind of sweet and foamy. My advice for this one is similar to what it was for last year's pie: If you're going to spend the calories on dessert, find something more exciting than this.

Be sure to visit all the Pieathalon posts! The links should be correct and live now if you had some trouble earlier.


It’s not from a Vintage Recipe Card! Surly made a Dutch Peaches and Cream Pie
Kelli at Kelli’s Kitchen whips up a Chocolate Mousse Pie
Dr. Bobb experiments with Ritz Cracker Mock Apple Pie
Marguerite Patten’s Cheese Pie is on the menu over at Kelly’s Velveteen Lounge Kitsch-en
Jenny at Silver Screen Suppers put Sweet Onion Pie to the test
Kari, The Nostagic Cook, presents The Tansey
The Battenburg Belle gets her bake on with a Frosty Vanilla Pie
What is Mock Pecan Pie? Find out with Sally at My Custard Pie
Taryn tries her hand at Vincent Price’s Pineapple Meringue Pie at Retro Food for Modern Times
Camilla goes on another Culinary Adventure by making a Peaches and Cream Tart
Peter Fuller, the curator of Vincent Price Legacy, UK gets all cute with a Puddin n’ Pie. (He got my submission, by the way, so you should feel sorry for him.)
Say ‘bon jour’ to Renee’s French Raspberry Pie over at Tortillas and Honey
The Unofficial Mad Men Cookbook goes Hawaiian with Aloha Meringue Pie
A pie called The Millionaire? What? Mimi at Once Upon a Salad will find out!
Sue, of Vintage Cookbookery (and the world record holder for the largest privately owned cookbook collection) serves up Yul Brenner’s Walnut Pie
I don’t know who Tyler is, but he has a pie. Go visit Wendy at A Day in the Life on the Farm
Go inside the Heritage Recipe Box with Clara and an Olde English Egg Nog Pie
Open the Book of Cookrye and discover Cool Mint Cookie Pie
Debra at Eliot’s Eats gets fruity with an Apricot Meringue Pie
Join Judy, Vicki, and The Book Club CookBook for the questionable “Almost a Pie”
The classic Seafoam Cantaloupe Pie is what’s for dessert at Recipes4Rebels

Most importantly, check out Kate's Pie (Wait-- that doesn't sound right... but that's the name, and it is an actual pie. I've got to get my mind out of the gutter.) at Dinner Is Served 1972. We are all grateful to Yinzerella for putting together this event.
Posted by Poppy Crocker at 12:44 AM