Peg Bracken's The I Hate to Cook Almanack (1976) marks September with a "Harvest of Extra-Simple Fast Recipes" since September is the back-to-school month "when all seemeth possible & is, to the reluctant Cook and the harried Houseperson, given another Two Hours in the Daye." Of course, nobody gets an extra two hours a day (which I certainly need come September), so we get lists of fast veggies, desserts, and odds-and-ends for the days when the kids miss the bus and the car's tire goes flat. 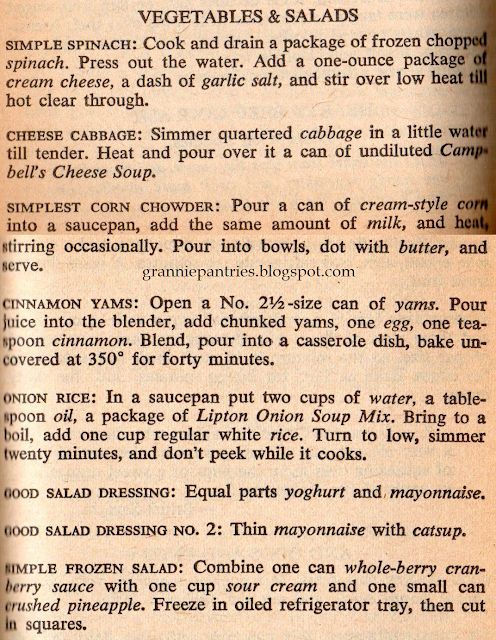 These often start with cans-- cheese soup over cabbage, creamed corn transformed into corn chowder with some extra milk and butter, cranberry sauce mixed with crushed pineapple and sour cream before freezing. The canned yams (actually sweet potatoes) become a casserole through blending with egg and cinnamon before baking. They're all fast, easy, and simplified versions of the already-pretty simple recipes common to community cookbooks from the '70s. 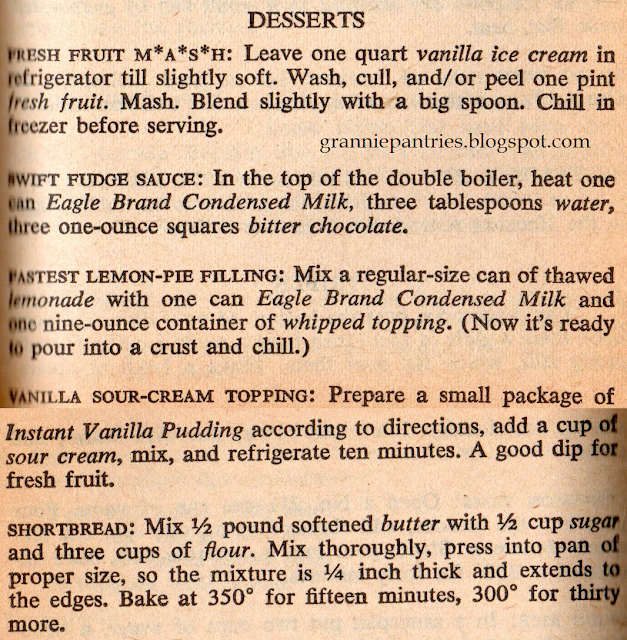 Condensed milk with lemonade and whipped topping is bound to be tooth-shattering, but fresh fruit blended into vanilla ice cream or vanilla pudding mixed with sour cream and used as a fruit dip would probably be sweet in the more pleasant sense....

The odds-and-ends are, unsurprisingly, the most hit-or-miss: 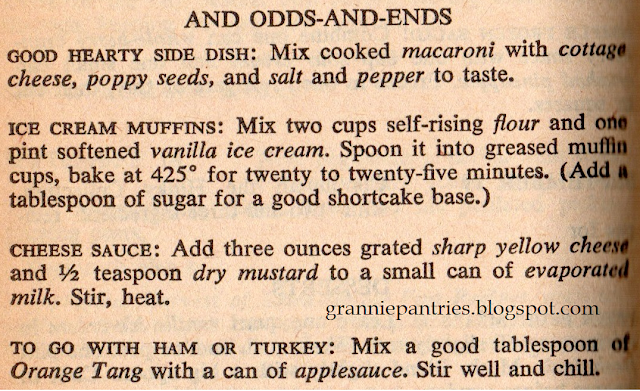 Confession: I love any kind of pasta mixed with cottage cheese and poppy seeds, though I know a lot of people can't stand cottage cheese and blanch at the thought of eating it warmed by the pasta.... The magical two-ingredient ice cream muffins that were all the rage just a few years ago did not originate in 2014 or so. They're in the almanack (and weren't really even new when Bracken published them). And Tang mixed with applesauce as a ham or turkey topper? Just the thought of it gives me the jibblies!

The jibblies are appropriate, though, as we head into the month when my Halloween decorations finally start seeming like I purposefully put them out for the season (rather than the truth, which is that they're always out). Have an ominous month!
Posted by Poppy Crocker at 10:33 AM