In which your humble writer makes some bananas very sad

You're in for a treat today! Yes, it's a bonus post for the SIXTH annual Pieathalon. Just like last year, I was lucky enough to get a pie recipe from Dr. Bobb of Dr. Bobb's Kitschen!

This time, my recipe comes from the Hempfield School District Cookbook. 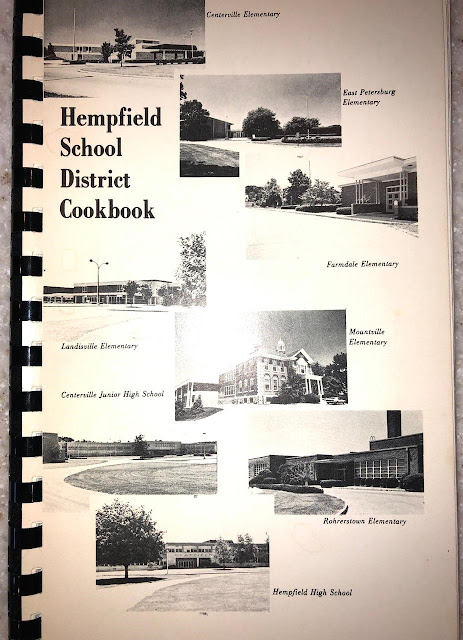 Judging from the Expression of Appreciation, I'm guessing this book should be from about 1984. 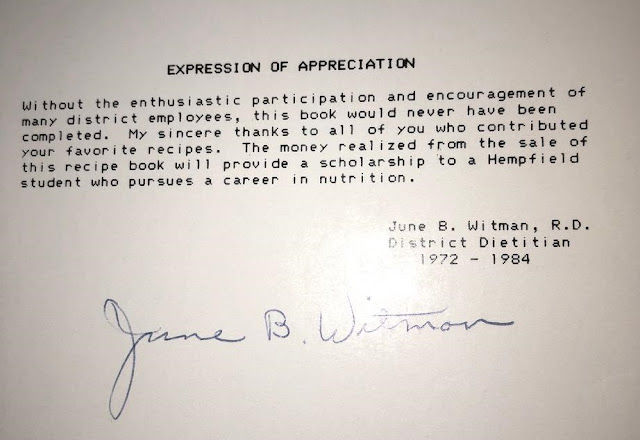 Dr. Bobb was nice enough to send a recipe that sounded like it could be pretty good: Clara Kosmela--Rohrerstown's Banana Split Pie! 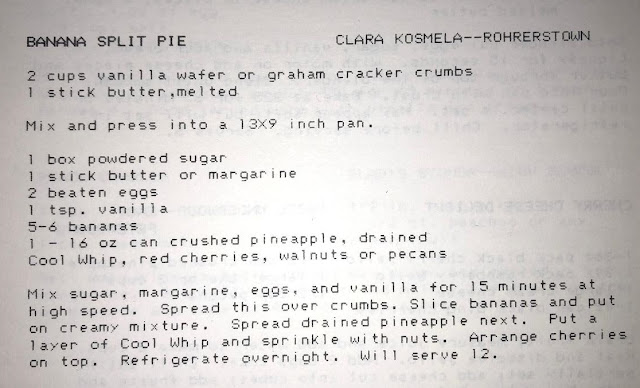 Here are the typed-out directions if you can't read the recipe very well:

Mix sugar, margarine, eggs, and vanilla for 15 minutes at high speed.  Spread this over crumbs. Slice bananas and put on creamy mixture. Spread drained pineapple next. Put a layer of Cool Whip and sprinkle with nuts. Arrange cherries on top. Refrigerate overnight.  Will serve 12.

Here's a lineup of the ingredients. You may notice the blue marks on the eggs. That's because I got pasteurized eggs since the eggs in this recipe are not cooked at all. (My Pieathalon email did note that some similar recipes use cream cheese instead of eggs for those who don't want to risk eating raw eggs.) 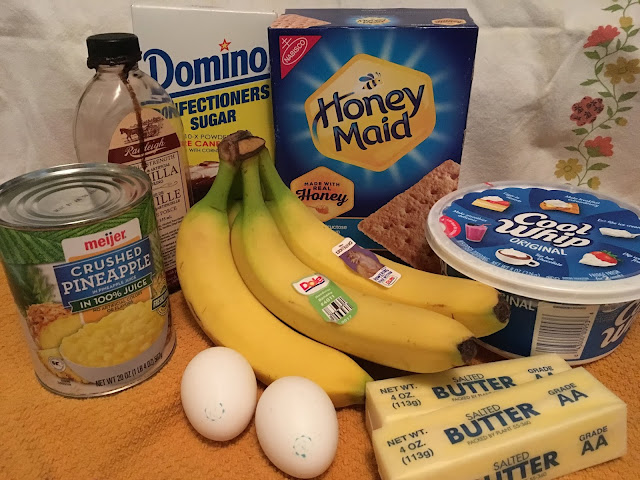 Fun fact: I only read the ingredients list and bought what I needed without paying attention to the rest of the recipe. Then I started wondering how it was all going to fit into a 9" pie plate. I didn't realize until I started that this is not a traditional pie, but a 9 x 13" dessert! I'm glad I had a 9 x 13" pan already, or I would have had to go out shopping again!

And yes, I know, there are no cherries or nuts. I don't like cherries and the people I shared this with don't like nuts, so the pie had to go ungarnished.

I've always felt nervous about making the other recipes because they're usually kind of complicated, especially with whipped egg whites and/ or gelatin, and I'm always afraid I'll screw them up. Luckily, this one was pretty straightforward. First, a crumb crust, and then some time beating together the powdered sugar, eggs, vanilla, and butter. 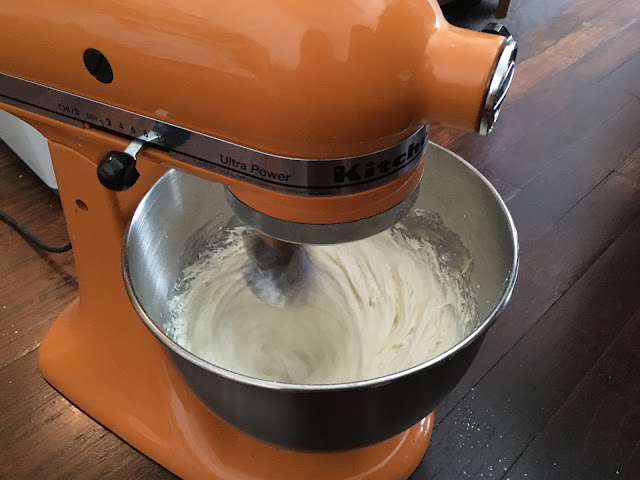 Dump the well-mixed filling onto the crumb crust, then top with bananas and drained crushed pineapple. 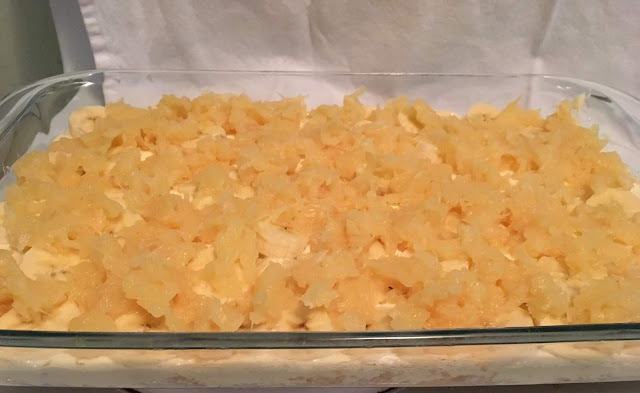 I think four bananas would have been plenty, as I had more than I really needed with five. I used a full 20-oz. can of pineapple instead of the 16-oz. the recipe called for, and it was so hard to distribute evenly that I think I could have actually used a bit more.

Then it got topped with Cool Whip-- again, a bit unevenly. I thought it was fully thawed, but the center was still a little frozen, so it was hard to spread just right. Oh, well.

After the chilling time, I called in my special guest taster! 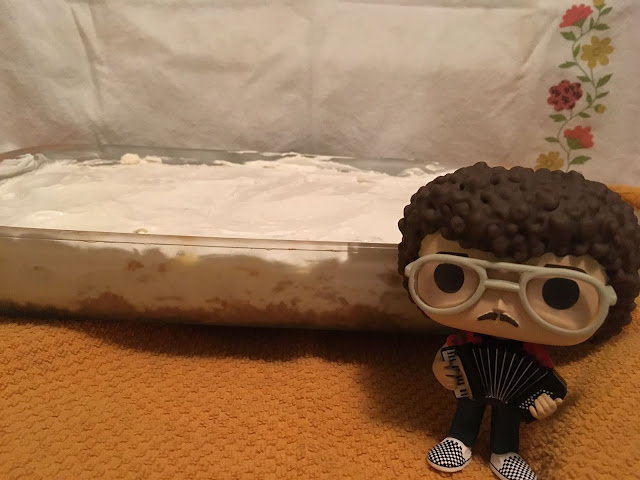 Even though the real Weird Al wouldn't try this since he's vegan, the Funko Pop version of his '80s self was ready to accept the challenge. He'll try anything weird once, even if it is essentially frosting with eggs in it on a graham cracker crust with some fruit and Cool Whip topping.

I cut in and discovered that my crumb crust, as usual, had completely adhered to the pan and this was not easy to get out! And the tiny accordion was no help for cutting or serving, though mini-Weird Al helpfully used the bellows in his accordion to make it sound like the pie was struggling for breath as I cut into it.

When I finally pried a piece loose, it looked pretty bad, but he was ready to jump in: 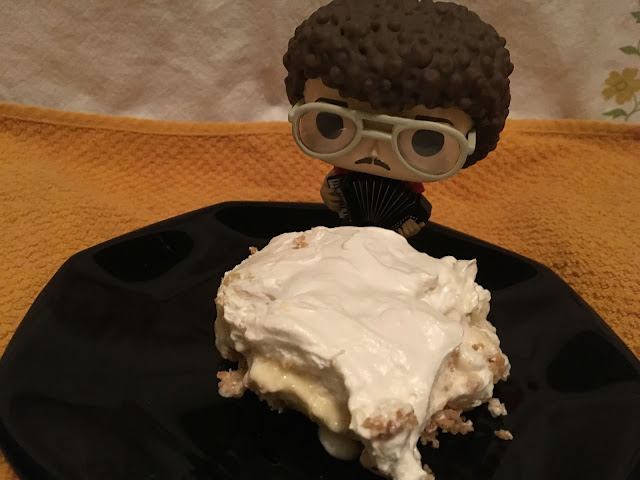 "It's almost as good as a Twinkie Wiener Sandwich!" he replied. I couldn't tell whether it was with genuine enthusiasm or sarcasm, so I tried a piece too.

I regularly get a bit annoyed with food reviewers who complain that a dessert is too sweet. (It's dessert! The whole point is to be sweet!) So I really hate to say it, but this is too damn sweet! When I could get a bite that was mostly fruit, it was okay. (Probably a loser in the equation to determine whether it's worth the calories, but at least acceptable.) Bites with more of the eggy-frosting gunk were so sweet that they made my mouth feel quivery. Plus, the whole thing is a little soupy, even though I drained the pineapple very well. Once again, this is not a winner (even though I had high hopes going in). It was a lot of fun to make, though! 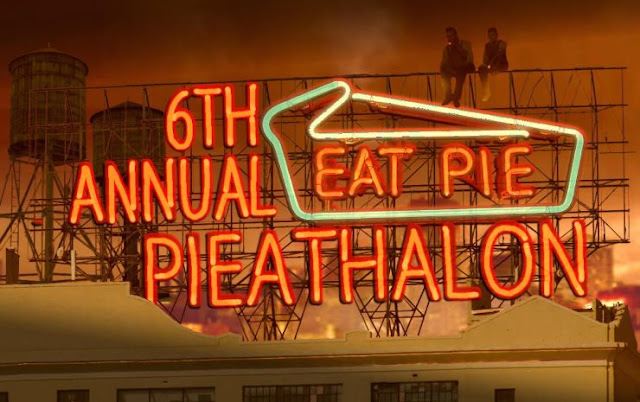 Thanks again to Yinzerella at Dinner Is Served 1972 for organizing the Pieathalon! Be sure to visit the other Pieathletes!