Have a vintage Weight Watchers "Cocktail"

With all the work involved in figuring out menus that fit the complicated program, people who used the Weight Watchers New Program Cookbook (Jean Nidetch, 1978) must have wanted a good, stiff drink. No such luck, as the program didn't allow alcohol. It did, however, offer some substitutes for those who really wanted something to at least allow them to pretend they were having real mixed drinks, so let's check out the Weight Watchers' faux drinks.

A few mixed drinks start out with some pretty diet-friendly ingredients, so it's not much of a jump to make them non-alcoholic. Tomato juice is already pretty low-cal, so it was no shock to find a version of the (Halloween-appropriate!) Bloody Mary. 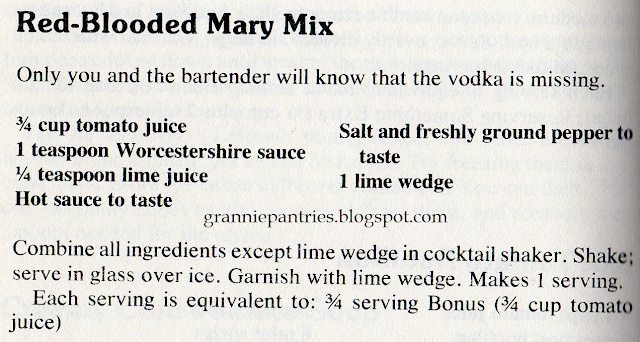 Fun fact: I found this recipe a few pages away and initially thought it was meant to be used to add a little spark to the Red-Blooded Mary Mix. 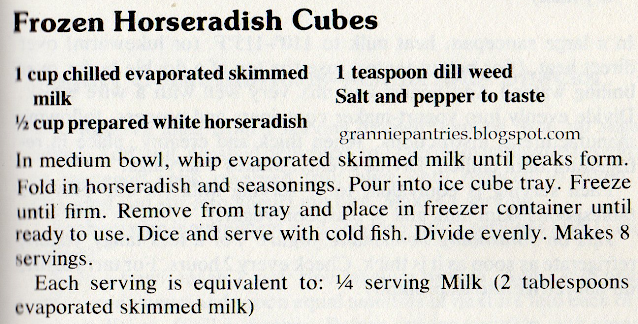 Then I read the end of the recipe and saw that Frozen Horseradish Cubes are supposed to be a garnish for cold fish. That just seems weird to me, but I am NOT a condiment person, so maybe people love their cold fish loaded up with frozen horseradish and I have just never noticed? (I still think my drink idea is better, but I like neither horseradish nor Bloody Marys, so I could be wrong. Maybe the idea is just a Halloween horror?)

A lot of drink ingredients are not as easy to translate for a diet version as tomato juice, but I know that any drink calling for heavy cream is going to replace it with nonfat dry milk.

Nonfat dry milk? Check! The brandy gets replaced with brandy or rum extract. The crème de cacao gets pretty much ignored (unless you count the artificial sweetener). Is it really too much to ask to add a bit of cocoa powder, at least? It's not like cocoa powder is loaded with calories.

A lot of the drinks just seem like they're not really trying, though. Soon, the Brandylike Alexander starts seeming like someone put in a genuine effort. Want a spritzer?

Club soda, ice, and sherry extract. So basically, ice water with a dab of a flavoring that I doubt many 1970s grocery stores even carried.

But, hey. Sometimes that unimaginativeness might be preferable to a little creativity. If you want a tropical drink, I imagine you're hoping for something with rum or curaçao with notes of pineapple, coconut, passionfruit, and/or mango...

...not chicken broth mixed with tomato and orange juices. In short, well, you might be better off when Weight Watchers puts less effort into the fake drink! Or maybe just be glad you live now and can get away with a hard seltzer (which is even less effort than putting extract into ice water!).