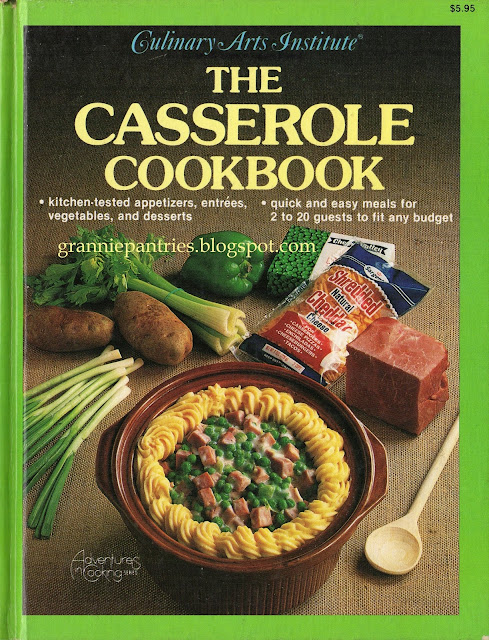 I mean, come on! The vintage frozen pea box that looks nearly generic with its plain white bordered by a picture of plain old peas! The bag of shredded cheddar cheese with colors and lettering that make me think more of potato chips than cheese, with no convenient zip-top closure built into the packaging! The block of ham that looks more like a brick than something edible! The way it all comes together in a plain brown crock, a big pea-and-ham glob bordered with a cheesy-potato ruffle.

Also interesting: This cover image is for He-Man Casserole.

I am not at all surprised by the random gendering of a recipe for no discernible reason. I am very much surprised that the Culinary Arts Institute would gender a casserole consisting of veggies and ham in a white sauce topped with frilly mashed potatoes as masculine. I mean, ladies ate ethereal soufflées with creamed turkey and men ate any meats they could throw on the grill. I don't know whose rules the CAI was playing by, but I like their subversion.

Well, they're occasionally subversive. They couldn't dodge all the trends. I mean, it was barely past the '70s, so they still had to randomly throw canned fruit into stuff.

I can imagine a lot of responses to canned luncheon meat with onions, potatoes, and a little greenery cooked in beef broth, but "You know what would be great? A topping of brown-sugary canned pear halves!" is not high on that list. Maybe the sugary fruit would be better as a separate dessert, with some nice streusel topping and/or cooked in a little wine?

What I really loved, though, is that this book does have nice full-color pictures to go with a few recipes, like this big old pile of sausages. 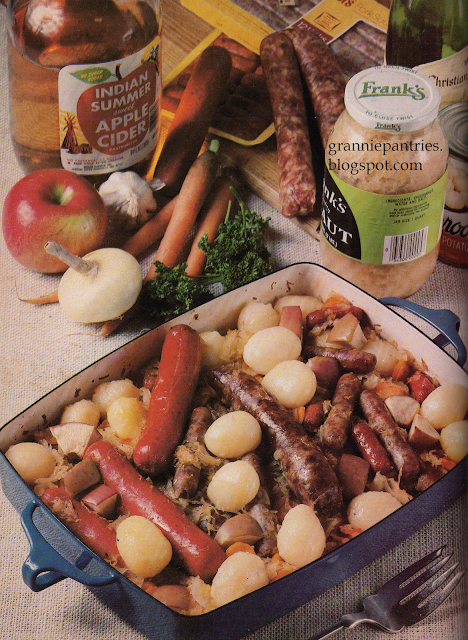 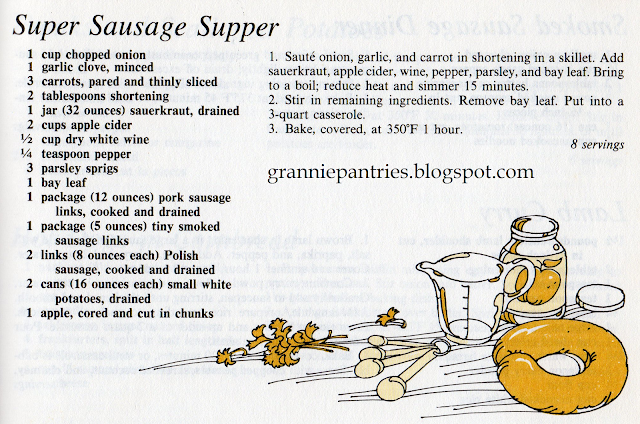 No surprise that Super Sausage Supper is pretty much exactly what it looks like-- sausage links, Polish sausage, tiny smoked sausage, and canned potatoes, all held aloft by a mush of sauerkraut, onion, garlic, apple cider, white wine, and apple. I'm sure my German ancestors would be appalled by how repellent that sounds to me.
If we want something even more brown and the '80s midwest version of Mexican instead of German, there's this lovely casserole. 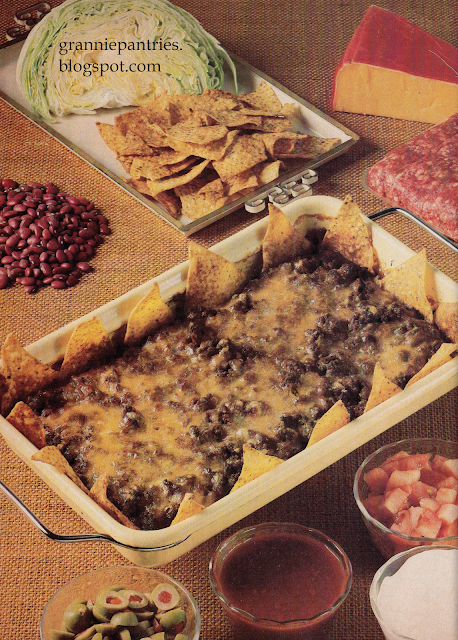 At least the brown-and-beige pit looks kind of like a monster's mouth with its row of tortilla chip "teeth." I also love that the raw ingredients (including some dried beans that are not even part of the recipe-- just a prop for "Mexican" food, I guess!) are at the top and the accompaniments of taco sauce, chopped olives, tomatoes, and sour cream are at the bottom. It just seems weird (and not entirely safe) to have raw ground beef so close to the finished casserole and the little custard cups full of toppings.

The Taco Casserole itself initially seems fine if you're an admirer of plain old midwestern taco-mix, cheese, and lettuce-style tacos (which I am).

But then, check the instructions a little more closely (and the picture of the toppings). What's going on with the lettuce? Who wants hot lettuce baked under a layer of ground beef? Why is the lettuce not a crunchy topping, but a soggy, unwelcome addition to the casserole? Why? The brown and beige pit is scarier than it looks.

It's so much fun to check out all the weird little touches in The Casserole Cookbook. Is hot lettuce really necessary? Wouldn't "Random Sausage Pile" have been a hilarious recipe name? And shouldn't that have been the "he-man" recipe? I'm so grateful to have found a book that inspires such deep thoughts.