It's that glorious time once again: Pieathalon Day! Just in case the Pieathalon is a new concept for you (and it's probably not, as you were likely redirected here from someone else's Pieathalon entry), the delightful Yinzerella of Dinner Is Served 1972 facilitates a recipe exchange among a group of people who blog about old recipes and cookbooks. We all send in our wildest vintage pie recipes (or best ones, for bloggers who are nicer than I am), receive one in return, bake it, and post our results.

Keep in mind that my blog consists mostly of scans of old cookbooks-- I don't usually cook! So it should come as no surprise that my pies are usually wrecks. (Just thought newcomers should be prepared.)

So what challenge did I get this year? My pie came courtesy of Greg at Recipes for Rebels. He wrote Recipes for Rebels…in the Kitchen with James Dean. For this year's Pieathalon, Greg cracked open Pillsbury's Best 1000 Recipes: Best of the Bake-Off Collection (ed. Ann Pillsbury, 1959)... 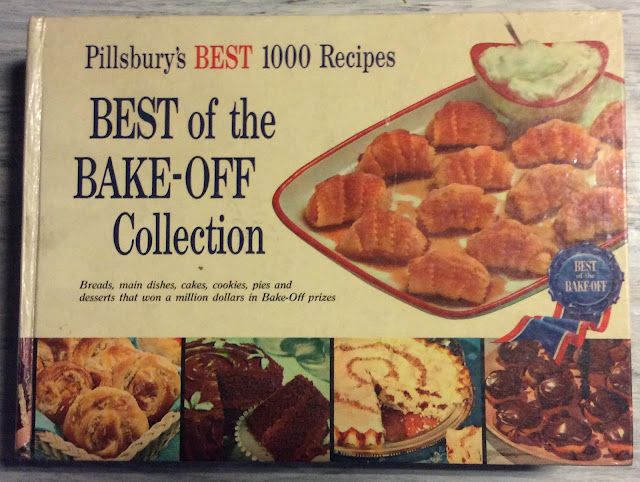 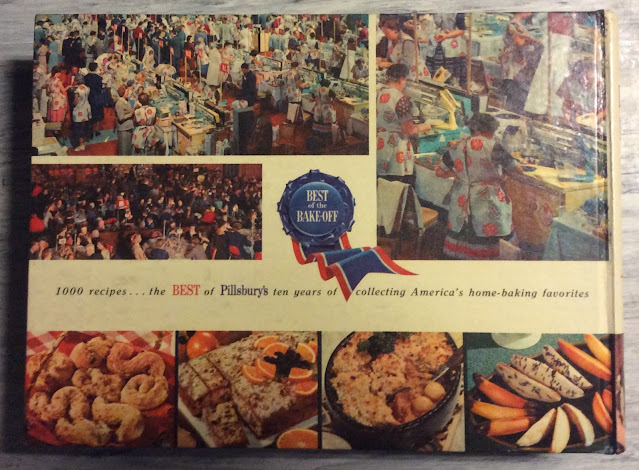 ...and sent me Chocolate-Crusted Coffee Pie. 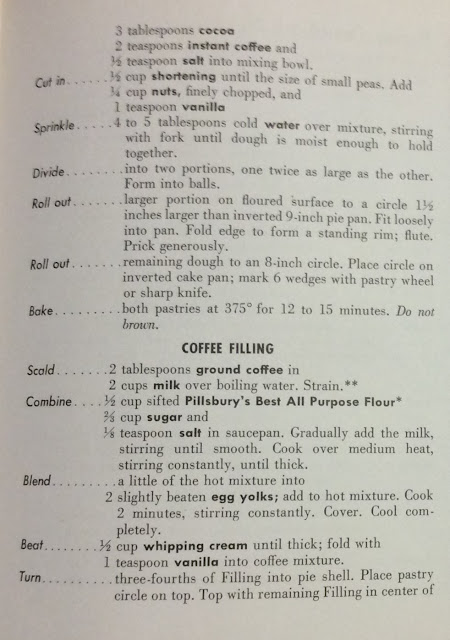 I'm sure this recipe sounds delectable to a lot of you, but if you're not familiar with this blog, I hate pretty much everything. That includes coffee. I sign up to make these things because it's fun, but I don't expect to like them because I'm a weirdo. So let's get started. 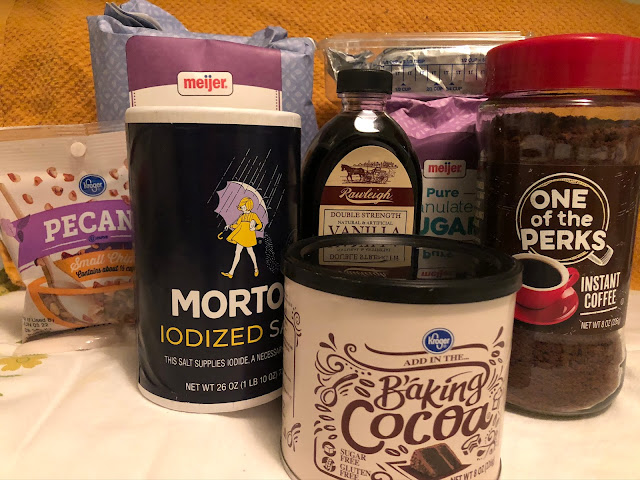 Then mix them up and roll out 2/3 of the dough to fit in my pie pan. 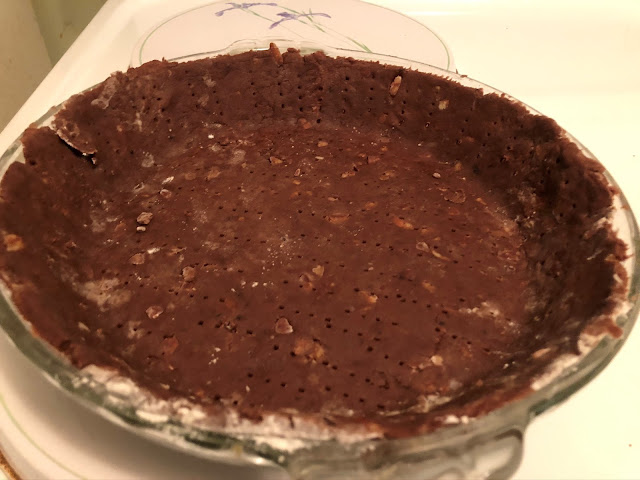 Yeah, yeah. I know I was supposed to flute the edges, but the crust was seriously hard to work with because it was full of chopped pecans. I could only roll it thin enough to fit the pan-- no extras at the edge for fancy fluting. Maybe I should have saved less dough for the second crust. Maybe I should have cut the pecans smaller than they were when I bought them. It would probably also help if my pie pan were actually 9 inches, but it's 9-1/2. The point is, I am too lazy to try to figure out how to do a fluted edge on the crust, even though Greg was nice enough to send me (blurry) instructions. 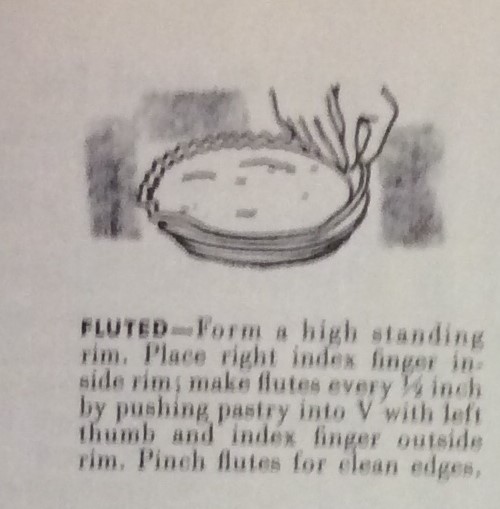 You'll notice that this pie is also unusual in that it has a "second layer of tender pastry hiding in the filling." That means the remaining third of the crust got kind of rolled into a circle to be baked separately. (I was not too precious about it because it would be hidden anyway. Nobody's going to see it, so what do I care how it looks? Well, I guess you will see it, but if I cared what you thought, I would be too ashamed by my pie-making skills to keep doing the Pieathalon year after year.) I know I was supposed to "mark six wedges" on it, but I just cut the crust most of the way because I was worried it would be hard to cut once it was submerged in the filling and I couldn't see it. And I made eight sections because the slices would be massive if there were only six. And I baked it on a cookie sheet since I didn't have an 8-inch cake pan. I am not good at following directions. 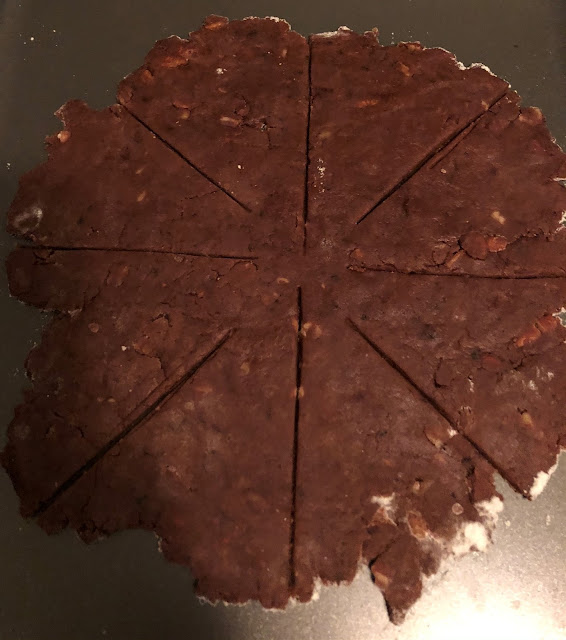 While the crusts were cooling, I started on the filling. First, we need the ingredients: 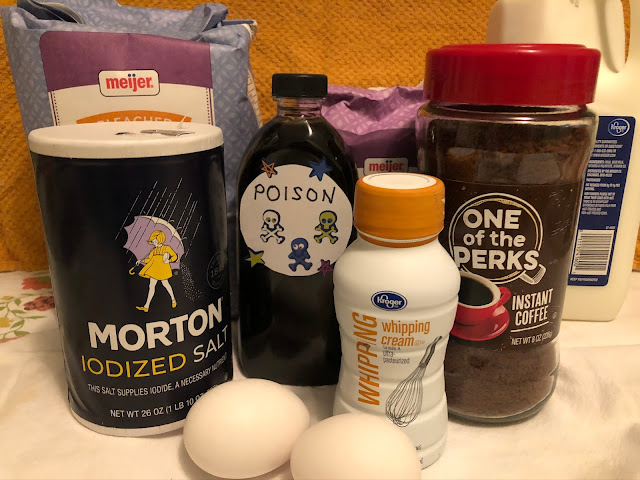 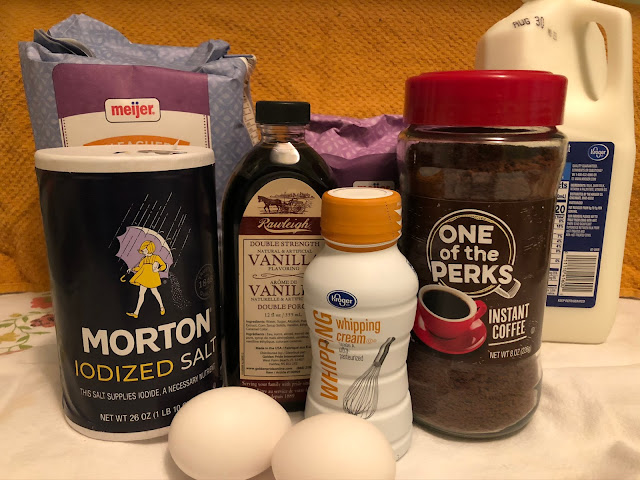 Then I started the custard filling. I mixed the flour, sugar, instant coffee, and salt in a saucepan, added the milk gradually, and stirred as it heated. It seemed smooth initially, but once it started getting thick, it also started getting lumpy. Hmm. And even though I tempered the egg yolks before I added them to the hot filling, well, I'll just say they didn't help with the lumpiness situation. Plus, the filling got thick. I mean, really thick. Thick enough that once I took it off the heat, I re-checked the recipe to make sure I didn't add too much flour or skimp on the milk. My proportions were right, though, so I left it to cool. 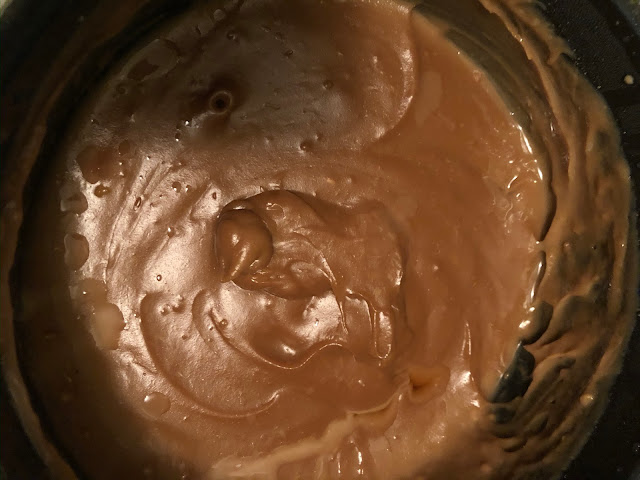 Doesn't that look delightful? Not at all like fetid swamp mud drying out in the sun? I thought about trying to strain it, but it was so thick I thought the entire lump would just sit atop the strainer rather than going through. (And no, I don't think it would have gone through a strainer if I had thought of it when the custard was still hot, either.) I finally decided to bust out the food processor and try to make it at least smooth-ish and loose enough I could fold in the whipped cream. I didn't even have to scrape the pan, as the custard simply peeled out in a single gelatinous chunk. (Sorry, but I was so lost in thought about how to fix the filling that I didn't think to take pictures.) I just soldiered on, running the food processor until it it had done as much as it could to make the custard smooth. Then I folded in the whipped cream, plopped about 3/4 of it into the pie shell, and topped it with the crust insert. 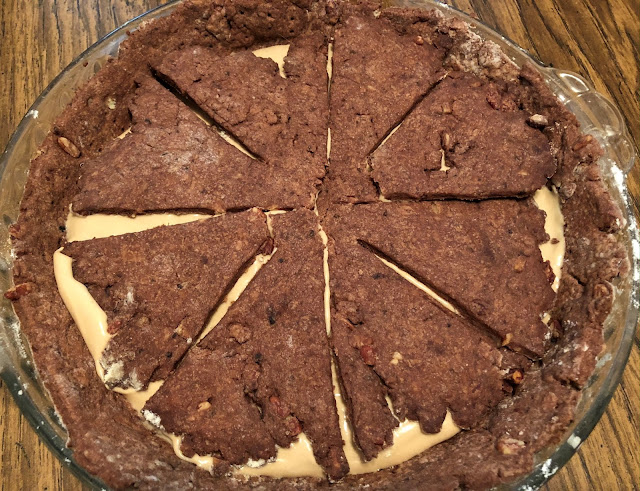 Ta-da! Perfect fit. 🙄 Now just to cover that second crust up so nobody else will see it... 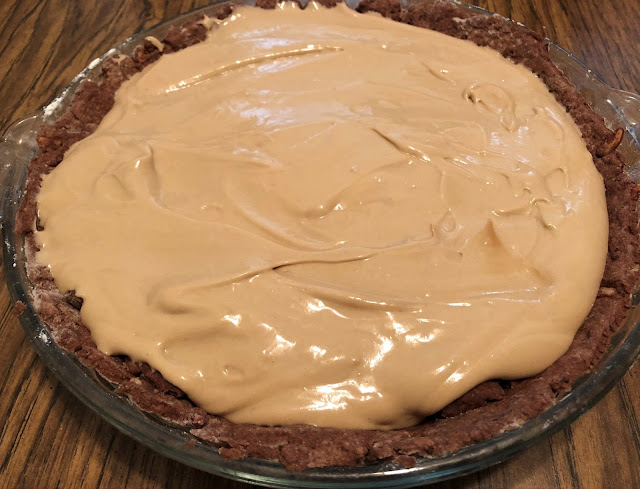 Well, maybe a corner sticks out here or there, but so what? I popped it into the fridge to fully chill and firm up before we went out to meet the special guest taster.
Chapter 3: The Taster Arrives

Even after yesterday's meeting, I was still shocked that a gust of icy wind blew through the door at our prearranged meeting spot. It's still summer! How does John Ruth do that? He must have been starving from running around in that cold weather because he immediately started eying the pie. 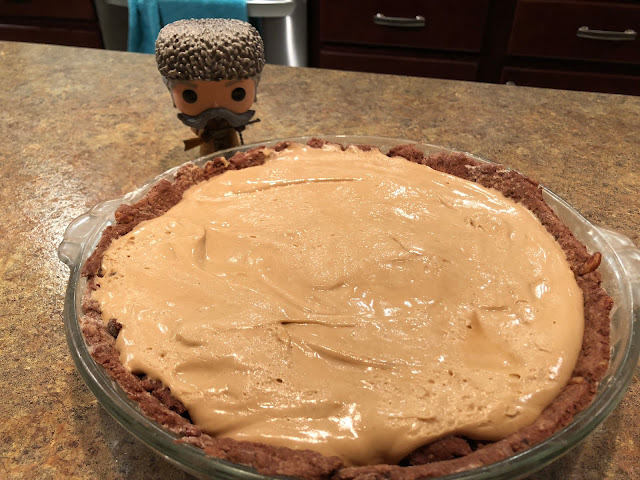 I thought for a second he was going to dive right in. "Shut the door!" I yelled. I handed him a hammer and some nails to make sure it would stay shut against the winter storm that had somehow followed him. Then I turned aside to address you, dear readers. If you haven't seen The Hateful Eight and don't intend to, well, you might not fully get the joke at the end, but I hope you're amused anyway. If you have seen The Hateful Eight, then you probably know where this is going, but I hope you like the payoff just the same. Don't let on that you know because I don't want to spook John Ruth. And if you haven't seen The Hateful Eight but want to and will be bent out of shape about spoilers, well, I hope you're dense enough that you haven't picked up on the plan yet. Just visit the other blogs participating in the Pieathalon, maybe check out my previous Pieathalon posts, and wait to scroll down to the results at the very end of this post until after you've watched the movie. Now I better get back to talking about the pie since the door seems to be firmly shut.

"Here," I said, having cut a big slice of Chocolate-Crusted Coffee Pie for my visitor while also addressing the audience in an aside. (Actually, I cut two because the first slice was completely scrambled. It is hard to get that first slice out, and even though this one is definitely better-looking, it's nothing a food stylist would want to take credit for.) 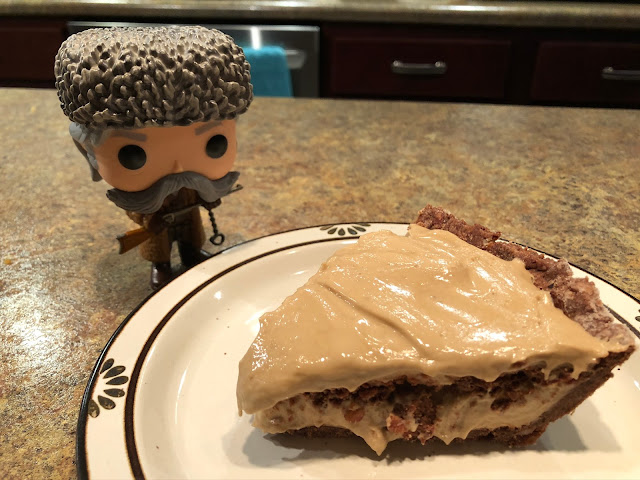 I'm not sure John Ruth fully appreciated the interesting effect of the submerged crust (which was surprisingly easy to cut--probably tenderized by the filling). He just dug on in.
And then gasped, "The coffee!" 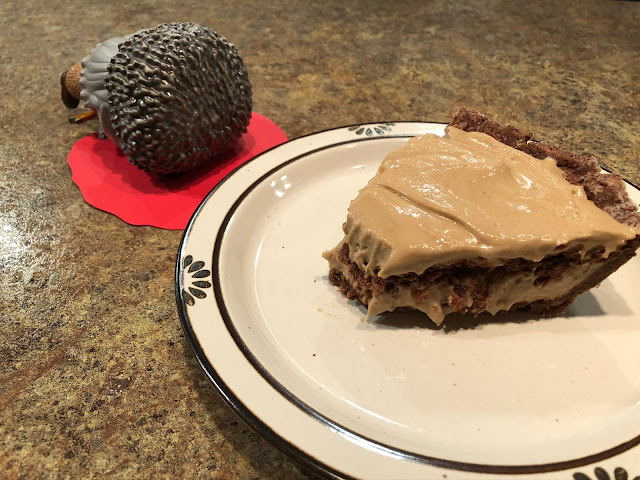 I guess my special guest wasn't much of a fan.... Too bad.
Chapter 5: The Real Taste
Okay, I'll admit that the rest of the mysterious entities that I will refer to as "us" tried the part that I'd flavored with vanilla instead of poison. The crust was pretty good and if I ever actually made pie, I might use the recipe with a little extra cocoa instead of the instant coffee. It's very nutty and a bit bittersweet. The nuts add a crunchy texture to contrast the cream filling. The filling was smoother than I expected (and it held its shape rather than gushing everywhere!), so I guess the food processor helped.
Nobody else who tried it is a big fan of coffee, but they declared the pie "Not bad" and "Better than I expected." Everybody (except the resident nut-hater) agreed that the crust was the best part. The filling was rich and creamy but very coffee-forward. My partner liked this confection enough to take a piece home. The rest of it stayed with the tasting panel, who liked the pie enough that the un-poisoned portions of this were finished off in a couple of days. So, minor success, I guess, especially considering our dislike of/ indifference to coffee? If you really like coffee and are game for figuring out how to tame super-thick lumpy custard, check it out. Just remember to use vanilla instead of poison.
Posted by Poppy Crocker at 12:23 AM