It's that glorious time once again: Pieathalon Day! I don't usually cook except for when the delightful Yinzerella of Dinner Is Served 1972 facilitates a recipe exchange among a group of people who blog about old recipes and cookbooks. I send in a really weird recipe, hope that I get a recipe from someone who is kinder than I am, and then bake whatever I get. And the person who got my recipe ends up doing weird things with prunes or mayonnaise.

This year, I got a pie from Betty Crocker's Bisquick Cookbook (Ed. Myrna McCauley, second printing, 1973). 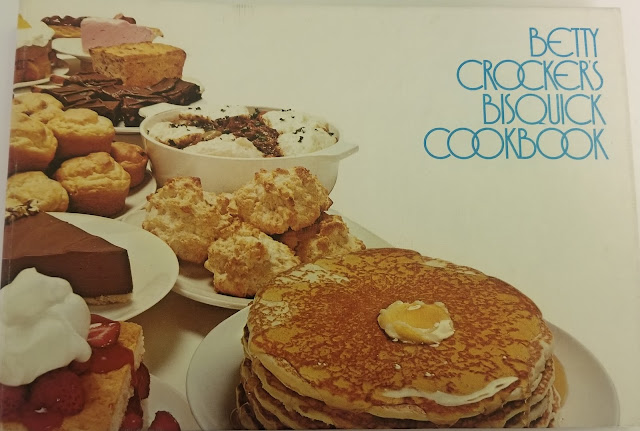 From a  Bisquick cookbook, I might expect an impossible pie-- one that is thickened with Bisquick, making a separate crust unnecessary, as Yinzerella used to make. No such luck, though, as I would have to make an actual crust for my assignment: Apricot Mallow Pie. 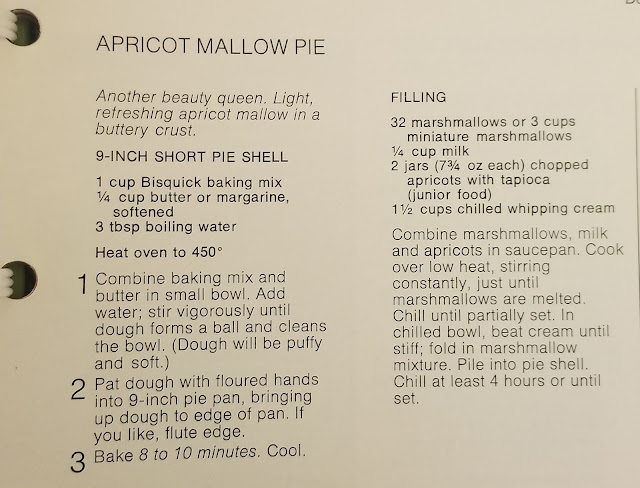 I was kind of nervous about the crust because I really suck at crust making, but this one seemed pretty easy: mix Bisquick with softened butter and boiling water, stir it all up until it forms a cohesive ball, and pat it into the pie pan.

It had a weird texture-- almost reminded me of choux pastry before the addition of eggs-- and there did not seem to be enough to quite cover my pie pan. There was definitely not enough dough to attempt the fluted edge the recipe recommended, but I have an odd-sized 9-1/2 inch pie pan, so that could be part of the issue. I just kept squidging the dough around until the pan was mostly covered and there were no longer any egregious holes. 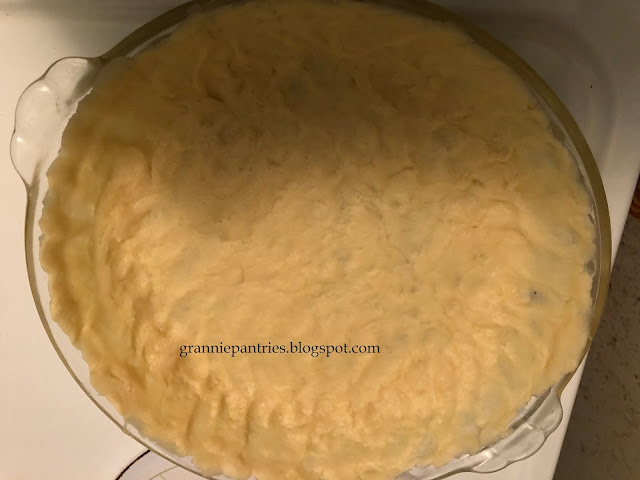 Luckily, the crust puffed up as it baked, so it looked better when it came out. I thought I took a picture of it, but I guess I didn't. My mind is mush when I'm this deep into the grading season.

Okay, time to move on to the filling, which actually gave me more anxiety than the crust. If you paid attention, you probably noticed that it called for two jars of chopped apricots with tapioca (junior food). I searched the internet, and it appears that chopped apricots with tapioca (junior food) is no longer a thing. I'd like to pretend that I briefly contemplated trying to make my own version by mincing canned apricots and cooking some tapioca in the juice, but we all know I'm too lazy for that. I decided to use just straight-up baby food. Then I discovered that my grocery store only offers apricot baby food in expensive pouches, and those pouches mix the apricots with various other ingredients (including squash) anyway, so I just got cheap tubs of peach baby food and called it a day.

That's still not what really gave me anxiety, though. I figured the swap would be fine. I was really worried that my internet sleuthing for baby food would mean that I'm going to get targeted ads for baby-related items for the next decade. And now that I bought baby food at a store where I have a loyalty card, that could mean I start getting personalized coupons for baby food, which I definitely do not want! I didn't realize how annoyed I can get by targeted advertising until I thought about the implications of making this recipe....

So anyway, here's what a pot full of cheap peach baby food and marshmallows looks like. 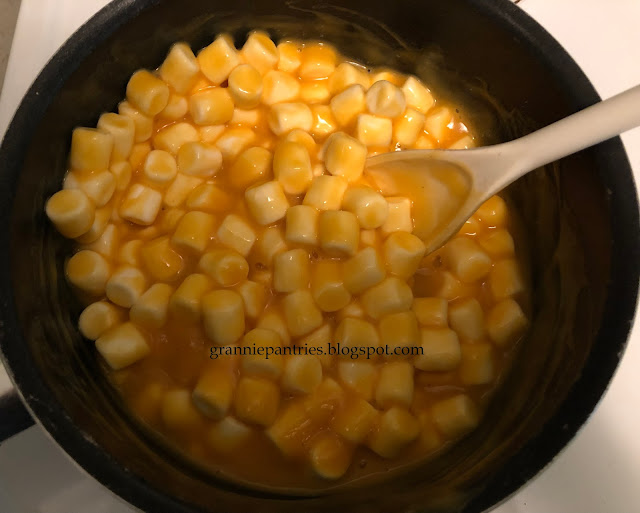 I was worried about what the recipe meant by "Chill until partially set." I could see myself either melting and deflating the whipped cream with under-chilled peachy marshmallow gunk or allowing said gunk to thicken up so much that the whipped cream would bounce right off instead of folding in. I guess my choice to let it chill out in a cold-water bath for 20 minutes or so before whipping and folding in the cream was fine, though. The end result looks pretty good for baby-food-and-marshmallow-whipped-cream on Bisquick. 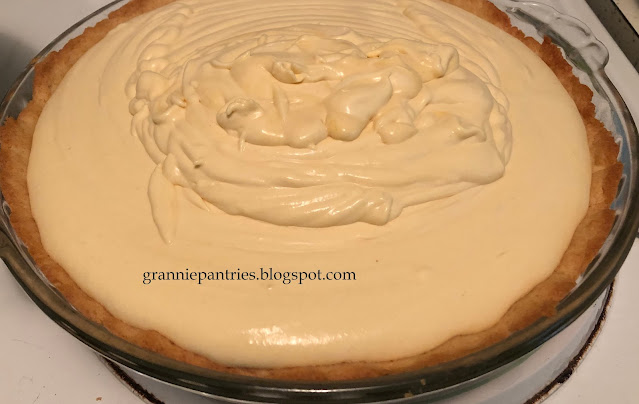 So I threw the pie into the fridge for 10-or-so hours to make sure it really set up.

That evening, peeling back the plastic wrap that covered this concoction, I noticed something in the air that was hard to describe but ... definitely not telling me to go there. Luckily, I was quickly distracted by a knock on the door as my special guest taster showed up.

"Look at you, with your mouth watering! You certainly came ready to taste a vintage Apricot Peach Mallow Pie," I said. Then I realized that his mouth was probably watering because he'd been looking at the girl who sits in the top of the greenest tree in my yard and I felt like an idiot. 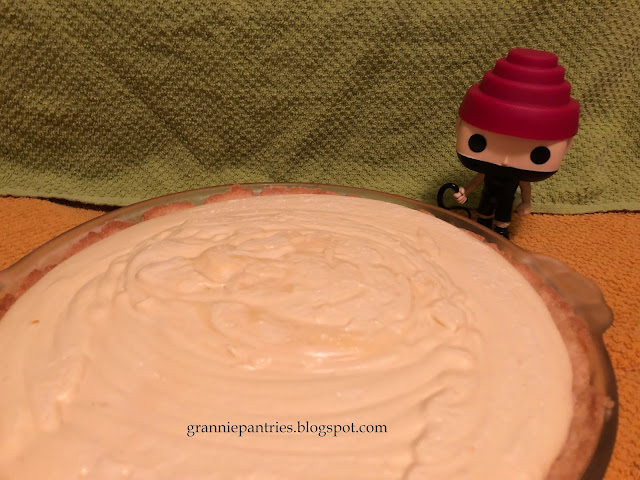 As the lone member of Devo who was available this evening surveyed the pie, I assured him that before the cream set out too long, I had whipped it... and then mixed it with baby food and melted marshmallows. He did not look impressed. And I felt like an idiot.

So I just cut him a nice big slice. 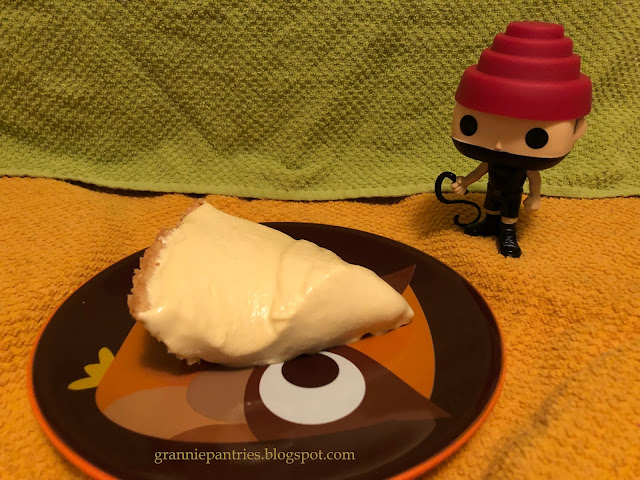 It was way runnier than I would have imagined, given that it had spent the whole day setting up. Facing down the massive slice, my energy-domed friend tried to assert his freedom of choice as far as the tasting portion went, but I assured him that freedom from choice was what he wanted and handed him a forkful.

"Because it's so fresh?"

He shot me a look that suggested I was being way too optimistic, and then he gave me the slip.

I got a fork and tried a bite too. The filling is somehow bland at first taste and then slowly takes on all the worst qualities of underseasoned and overprocessed canned fruit. It gets worse the longer you think about it. The crust, though. I can't be mad at extra-buttery Bisquick. It's rich and still on the edge of being crispy, though I'm sure it will be soggy with peachy baby food cream in just a few more hours.

So, my fellow Pieathletes, I hope it's a beautiful world for you.

As always, a bit THANK YOU to Yinzerella for putting this together. You can see her Candy Apple Cheese Pie at Dinner Is Served 1972.

Battenburghbelle at Kitchen Confidence was subjected to my contribution of Zucchini Pie.

The charming Dr. Bobb at Dr. Bobb's Kitschen got to try the delightful-sounding Praline Pumpkin Pie.

The hilarious and thorough SS at A Book of Cookrye can no longer claim that she has a site with everything but Yul Brynner, as she made Yul Brynner's Pie.

Surly of Vintage Recipe Cards went back to childhood with Pooh's Summer Pie.

Taryn of Retro Food for Modern Times got a little boozy with Lime Pie with Creme de Menthe.

Kari of The Nostalgic Cook got to try a pie that could taste her back: Ham Tongue Pie.

Camilla of Culinary Adventures with Camilla adventured all the way to heaven (I assume) with Chocolate Angel Pie. 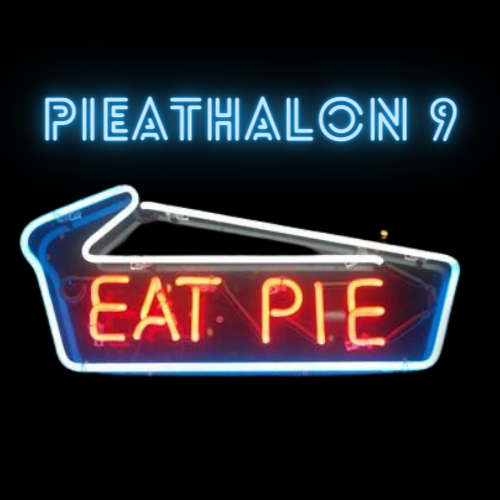 Posted by Poppy Crocker at 7:12 AM